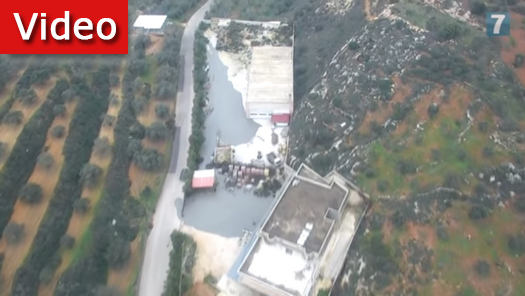 Cement poured into the tunnels built by Hezbollah under the Lebanon border can be seen on video flooding into a village in Lebanon where the tunnel originated.

The IDF, led by the Northern Command and the Galilee Division, completed the neutralization and destruction of the terrorist attack tunnels that were dug from the area of ​​a Lebanese Shi’ite village and were exposed by the IDF as part of Operation Defensive Shield.

The attack tunnels were built as a secret and significant component in the attack plan that Hezbollah has been trying to develop in recent years and were intended to allow the terrorist group’s Ratwan unit to infiltrate into Israel without becoming subject to IDF fire.

The exposure and destruction of the tunnels has significantly impaired Hezbollah’s ability to carry out its plans, along with a series of activities carried out in recent years to improve the elements of the “elite” and “fortification” projects.

The IDF’s activity thwarted and prevented Hezbollah’s attempt to strike the city of Metula and its residents while removing the tunnels from the picture. The tunnels were neutralized over several days using a complicated engineering method with many different components.

IDF Spokesman Brigadier General Ronen Manelis said that “the responsibility for the digging of the tunnels and its implications rests with the Lebanese government. The IDF will continue to act in coordination with the heads of the relevant authorities and their residents, and to update them as necessary.”

Manelis said that Hezbollah planned to “cut off” the land routes in northern Israel after entering the areas adjacent to Metula and other places, both from the underground tunnels that have now been exposed and through the infiltration of terrorists over the border.

Over the years, Hezbollah claimed that its facility in Kafr Kila was a chicken coop next to a “block factory” and even sent a reporter to report from there. The work of the excavation of the terrorist tunnels was carried out under the guise of that “factory.”

The destruction of the tunnel in the village of Kila was accomplished through the pouring of liquid cement into the tunnel. The entrance to the factory and several streets in the village have been flooded with cement.

“These pictures of the flowing cement will speak for themselves and show the Lebanese government under which Hezbollah operates,” the IDF Spokesman said, adding that the operation was proceeding according to plan.

It should be noted that although the IDF has given information on a number of tunnels to UNIFIL to deal with them, the UN peacekeeping force does not appear to have taken any action yet. The operation is not over yet and it will take time until we neutralize all the tunnels,” the IDF Spokesperson said.