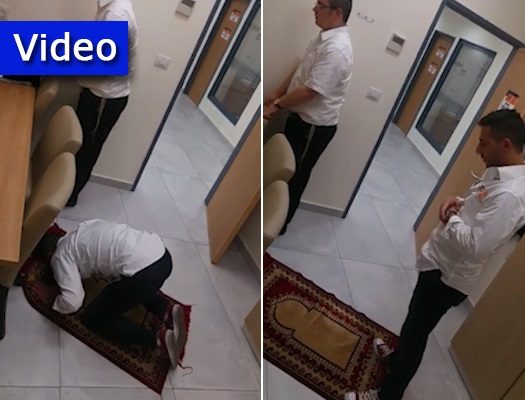 On Thursday evening, two emergency response dispatchers from United Hatzalah in Israel went on their shift break and took time out to pray in the break-room. Both responders prayed their evening prayers, but they were of two different religions.

Working side by side as dispatchers, helping volunteers of all religions save the lives of all people from all backgrounds in Israel, allowed them to feel comfortable praying alongside one another in the same room at the same time. This is not something you get to see every day, but it is something that happens every day at the United Hatzalah headquarters and other places in Israel. The dual prayer was caught on film.

President and Founder of United Hatzalah Eli Beer saw the video and said the following:

“One of the things not mentioned nearly enough in the media is the cooperation and friendships that are formed by people of different faiths working together to achieve a common goal. At United Hatzalah, we have volunteers and staff members of all faiths represented in Israel, working together to save lives. Volunteering side by side, day in and day out achieves a bond of friendship between people of different faiths that is rarely seen in today’s polarizing world.

“The friendship goes beyond simply working together. Our volunteers and staff learn about one another, help one another, support each other, and work as a team in some of the most trying circumstances that exist. They have even been known to invite members of other faiths to their weddings. I myself had numerous Arabs, Christians, Druze and even a few Bedouin people at my daughter’s wedding this past summer, and I would call them all close friends.

“It is not enough to hear me or the media talk about this. Sometimes you have to see it to understand it. So here is a video I am sharing from this past Thursday evening taken at United Hatzalah’s national headquarters in Jerusalem. A religious Jew and a religious Arab pray their evening prayers right next to each other. These two individuals, who work closely together, who know each other and are friendly with each other, in spite of their differences, came together to serve a common goal. They’ve learned how to put their differences aside and work together. They are so comfortable together, that on their break, they even pray with one another. That is what unity means. It doesn’t mean we each give up our own identity. It means that we respect our own identities, and we respect the other person’s identity as well and we work together to achieve our common goals as a united group of individuals who work together to save lives. That is what the network of volunteers of United Hatzalah is all about.”