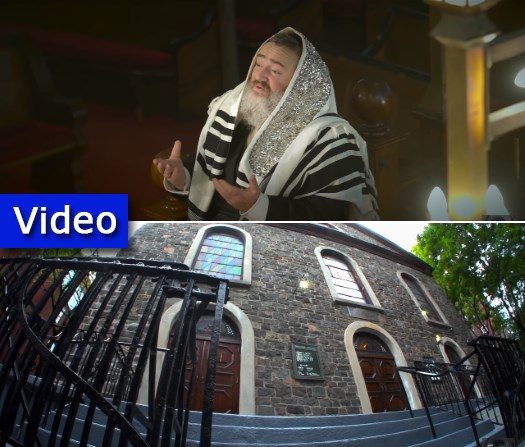 The Yomim Noraim are when we look back  on the events of the past year, look forward to the sweetness of the coming year, then look up to our creator with the words  Avinu Malkeinu (father in heaven) Asei Imonu Tzedaka Vochesed Vehoisheinu (do with us charity and kindness and save us). More than a prayer, asking Hashem to fill the coming year with his kindness and generosity, Avinu Malkeinu is an affirmation of our faith– that even though we  are looking back on a year with no shortage of tragedy and suffering,  our faith helps us  accept it as “Tzedaka Vchesed  V’Hosheynu”. We may not understand precisely how, but we are confident that one day we WILL be able to look back at these events and see in them Hashem’s remarkable kindness.

This new tune to Avinu Malkeinu titled “Tate Oy Tatenyu,” was composed by R’ Pinchas Wolf, a 71 year old Detroit native. A few years ago, when most people R’ Pinchas’s age look to “slow down a bit and relax“, R’ Pinchas undertook producing and releasing the 200+original compositions he had written over the years. In the last year and a half R’ Pinchas has already released two albums featuring his very special music as performed by some of the top artists in  Jewish music

As the Yomim Noraim are almost upon us, R’ Pinchas felt it was the ideal time to release this stirring new niggun accompanied by an equally stirring performance courtesy of the incomparable Shlomo Simcha. Tate Oy Tatenyu will be featured on the upcoming Shirei Pinchas 3 due to be released in time for Chanukah. To fully convey the “soul” of the song and ensure that it connects with the broadest listener base possible, R’ Pinchas enlisted the talents of David Lennik of Better World Productions. Using the world famous  Bialystoker shul as a backdrop , Lennik and his team elevated  R’ Pinchas’ already stellar nigun and Shlomo Simcha’s poignant performance into a world class, timeless message of Emunah, and Bitachon that will help  the listener gain an invaluable new perspective  just in time for the new year.