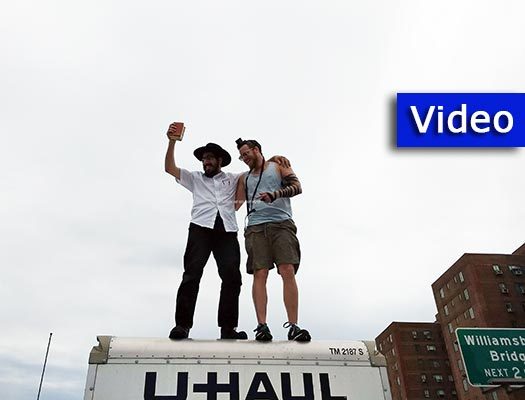 Stuck in a massive traffic jam in New York City’s FDR drive, a Lubavitcher noticed a man standing atop a U-Haul truck and speaking to another in Hebrew. He seized the moment and put on Tefillin with him in a very public display of Jewish pride – and the video went viral too.

This encounter occurred last week on the north-bound side of the FDR drive on manhattans East Side. A large car fire brought traffic to a complete standstill for well over an hour and prompting motorists to exit their cars and look around.

One man climbed atop his U-Haul truck in order to get a better look down the highway and relayed what he was seeing to another man in Hebrew.

A Lubavitcher quickly seized the moment and ask if they were Jewish and if they wanted to put on Tefillin, to which the man responded ‘since my Bar Mitzvah I have not put on Tefillin and I have seen many Chabad people who asked me to put them on, but I haven’t’.

But after climbing up on the roof of the truck the man finally yielded and proudly put Tefillin on. He then invited the man to come to Crown Heights and spend a Shabbos.

The encounter was filmed by dozens of bystanders and ‘went viral’ on various social media platforms.