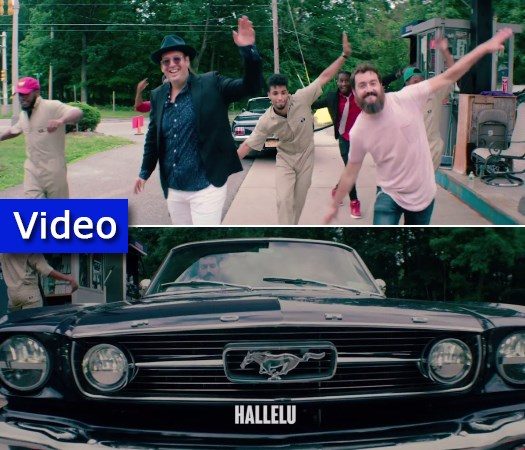 Lev Tahor, which inspired Jews around the globe with hits like “Im Eshkachech” and “Deaf Man In The Shteeble,” has teamed up with Meir Kay to release its first ever video, “Halellu.”

Group members Eli Schwebel, Gadi Fuchs and Ari Cukier have been friends for more than 30 years, and the hit song off their recent album “LTV” has gotten a fine treatment with a message of power and achdus. The song also features the Sephardic Boys Choir, led by Jack Braha.

“This is a culmination of all the beautiful music we have made together,” Schwebel said. “We decided we wanted to do a video that would inspire people who have been our fans over the years as well as a new generation of fans who have heard our new album.”

“This video is the cherry on top of everything we’ve done,” Fuchs said. “What I love about it is that the lyrics of the songs are great, it is a fun and catchy tune and there is a breakdown that is also slow and serious. Having an emotional element is something we always strive for to connect people to the essence of human experience and love.”

Director and producer Meir Kay, who has worked with such artists as Gad Elbaz, Benny Friedman and The Maccabeats, said the video was an unforgettable experience.

“It’s amazing to collaborate with like-minded people who have a creative vision that is both entertaining and also has a beautiful and positive message of uniting people,” he said. “It was a 20-hour shoot and we used anamorphic lenses so you get the best quality. We’re very proud of this video and I loved being behind the camera and in front of the camera.”

As to the question of why the group would make a video now, Cukier had a simple answer.

“If it’s fun, we do it,” he said. “For a lot of groups, videos are needed for exposure and getting the brand out there. For us, we’d released five albums and had a great following and never really considered it until Eli pushed us and introduced us to Meir Kay. In our first meeting, Meir sold us on his vision and we were convinced that with his energy and approach it would be a fun and awesome experience. And he was right because we had an absolute blast from start to finish with this project.”

The video shows Schwebel and Meir Kay cruising on the open road until their 1965 Mustang (newly minted – thanks to the generous Shalom Vegh) breaks down. But help is literally on the way. The song is a fusion of the tune of “Holiday Road” by Lindsay Buckingham and an original bridge written by Schwebel with illustrious harmonies. The three members unite for a powerful chorus toward the end of the video.

“To know that you’ve brought smiles to people’s faces with your music is a tremendous honor,” Schwebel said. “We’ve released five albums, done sold out concerts and now with this video, I know there will be a lot more smiles. I’m blessed to be able to connect to people and I think Meir Kay really helped bring the video to life. We put a lot of effort into it and there is also a multi-layered message, especially for me. No spoilers, but you can say that I’ve gone my own way in life musically and personally, creating great relationships, but in the end it’s my relationship with Gadi and Ari that outlasts all of my travels. And the global message is that no matter how hard you work, things don’t always go according to plan. Only by understanding that we are all connected can we get out of our limited vision and mode of thinking. That is the core of Praise. The core of Halellu.

Check out the group’s site at www.levtahor.com.