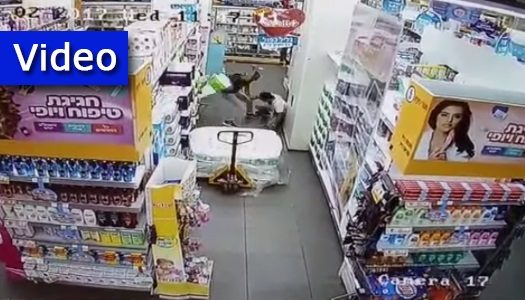 An Israeli man was stabbed this morning by a Palestinian terrorist at a supermarket in the central Israeli city of Yavne.

The victim, a 42-year-old Jewish man who is an employee of the supermarket, was taken to a hospital in Rehovot where he is listed in serious conditions. He suffered several stab wounds to his upper body.

The attacker was stopped by civilian bystanders, who wrestled him to the ground and held him until police arrived.

The attacker was identified as a 19-year-old Palestinian man from Nablus in the West Bank who, according to some reports, is also an employee at the supermarket.

Warning: The video below contains graphic images that some may find disturbing. Please view at your own discretion.