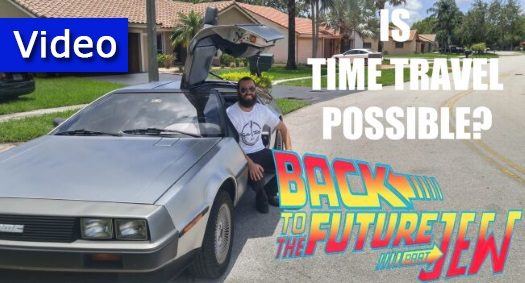 Is time travel possible? Its been a part of science fiction for centuries, but could it really occur? The nature of time is a fascinating topic that has been discussed since the days of the Greek philosophers. In the modern era, with a new look at the universe, the possibility of time travel is quickly moving from a science-fiction topic to something within the realm of possibility.

In the video below, Rabbi Pinchas Taylor, a shliach in south Florida, discusses the nature of time and the basics of time travel both from a scientific and Torah perspective. To cover the science-fiction element, Rabbi Taylor also speaks with actor Jeffrey Weissman, who played “George McFly” in the iconic film series Back to the Future II and III.

Lastly, Rabbi Taylor discusses the spiritual element of time travel. Teshuva is a spiritual time traveling of sorts, in that one erases a misdeed and its negative outcomes, and enters into an alternate universe where that transgression never happened. By making improvements in the present we can reshape the trajectory of our futures.