« From Days Gone By: Montreal Parade, 1980
Principals and Released Time Gearing Up for Parade » 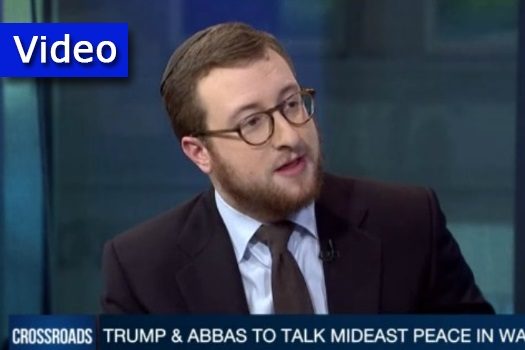 Since Donald Trump entered the White House in January, Palestinian Authority President Mahmoud Abbas has been facing more US pressure than ever before, the editor-in-chief of The Algemeiner said in an interview with i24 News on Tuesday.

“President Trump has lined up one hell of a stick which he’s hanging now over President Abbas’ head,” Dovid Efune explained to “Crossroads” hosts David Shuster and Michelle Makori ahead of the Trump-Abbas White House meeting.

Potential punitive measures, according to Efune, include the move of the US Embassy in Israel from Tel Aviv to Jerusalem and financial aid cuts, among other things.

“Tightening the screw a little bit, showing there are consequences for backing up and not coming to the table — [this] is certainly a step in the right direction,” Efune said.

Trump, in Efune’s view, is telling the Palestinians, “The clock is running against you guys. Come to the table, be serious about this.”

While former President Barack Obama put “the onus on Israel all the time and the result was that Abbas climbed much higher up the tree,” Efune noted, Trump’s stance has already led the Palestinian leader to say he would be willing to meet with Israeli Prime Minister Benjamin Netanyahu.

Regarding Trump’s stated goal of renewing Israeli-Palestinian peace talks, Efune said, “I think it’s a good thing that it’s a top priority for the Trump administration. But I think the key is that the approach is a little bit different. It’s not a prescriptive approach, where they’re dictating to both sides what they want the results of the negotiation to be. It’s a priority to bring them both to the table, but ultimately — they’ve stated this many, many times — they want the parties to be making the decisions. And that’s where we’re going to see things get tricky.”

Watch an excerpt from Efune’s i24 News interview below. The full discussion can be viewed here (8:30).

#Trump's 'tightening the screw' on the Palestinians is a positive development, @Efune of @Algemeiner tells @MichelleMakori & @DavidShuster pic.twitter.com/bYxP6ilFcf

« From Days Gone By: Montreal Parade, 1980
Principals and Released Time Gearing Up for Parade »