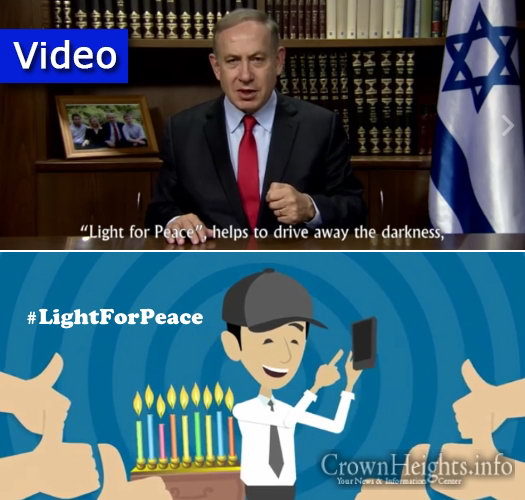 Israeli Prime Minister Benjamin Netanyahu has a warm message to the organizers of the #LightForPeace Chanukah campaign, a worldwide project initiated by Chabad Shluchim in Melbourne, Australia.

Following the success of their light for Peace initiative last Chanukah, Chabad Rabbis in Melbourne are once again urging members of the Worldwide community to submit selfies of themselves lighting Menorahs/Chanukiahs to help raise funds for the IDF.

The 2015 campaign was such a hit it took off worldwide, with tens of thousands of pictures posted on Facebook from as far afield as Russia, Argentina, China and France.

With an anonymous donor giving $2 for every selfie submitted, enough money was raised to purchase 320 winter jackets for a platoon of the IDF’s Givati Brigade.

It wasn’t just the soldiers who were grateful. The day after the jackets were distributed by Rabbi Dudu Lider and Saul Spigler, the pair were invited to the Knesset where they were personally thanked for their efforts by Israeli Prime Minister Benjamin Netanyahu and a number of other politicians from across the political spectrum.

And with all selfie posters entered into a draw to win a trip to Israel to help hand out the jackets, there was an added incentive to get involved.

This Chanukah, the Rabbis are preparing to surpass last year’s achievement and are inviting people across the globe to once more help perform the mitzvah of tzedakah simply by uploading their festive photos to www.lightforpeace.org and #lightforpeace on social media. They have produced marketing material in 6 languages, English, Hebrew, French, Russian, Spanish and Portuguese, and have ambassadors from many countries promoting the campaign.

To take part, simply snap yourself lighting the Menorah/Chanukiah and upload your picture to www.lightforpeace.org.