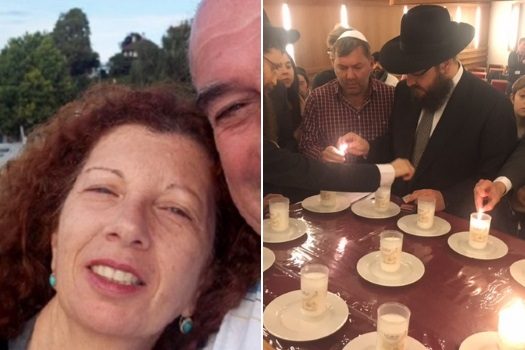 Dalia Elyakim, an Israeli woman declared missing since a terror attack struck Berlin, Germany, earlier in the week was identified as one of those killed.

Dalia was vacationing with her husband in the German capital, and is believed to have been killed after a truck ploughed into a Berlin market on Monday evening. Local police said that 12 people were killed overall in the incident.

Elyakim’s husband, Rami, was seriously injured in the incident and remains hospitalized after recovering from surgery.

Rabbi Yehuda Teichtal, rabbi of the Jewish community in Berlin and the local Chabad Shliach, arranged last night (Wednesday) a ceremony of prayer for the health of the injured and in remembrance of the murdered in the terror attack.

Present at the ceremony were approximately 100 members of the local Jewish community.

At the ceremony, Rabbi Teichtal said: “all of us are present together today. The attackers did and do not differentiate between us. They didn’t only attack Berlin, Germany or the Jews. But rather they attacked the people who believe in a world of democracy, a world full of respect, a world of light, because they, the attackers, believe in a life full of darkness. Our response to that is unity and the solidarity shown being here now”.

Klaus Dieter Groehler, a member of the German House of Representatives, the ‘Bundestag’, from the CDU party, the party of Chancellor Angela Merkel, participated and spoke at the ceremony. Groehler stated that he often noticed the high security level existing in previous Jewish ceremonies he has been too, and shared his past hope for this to come to an end. He therefore now, added Groehler is far more upset as the need for increased security is being imposed on the city of Berlin. He called out to the people of Berlin to continue living their everyday life as usual. Groehler additionally stated that he intends to take part in the traditional Chanukah candle lighting taking place in Brandenburg Gate.