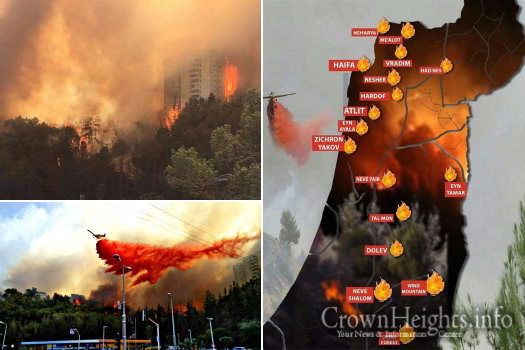 Out-of-control wildfires set intentionally by Palestinian terrorists have burned across Israel since Tuesday and continue to rage, with new areas threatened by flames as other blazes have come under control.

The Shin Bet (Israel Security Agency) and Israel Police announced Thursday afternoon that they have detained a number of suspects on suspicion of arson.

Channel 2 reported that some 60,000 residents have been evacuated from the Haifa area in light of fires in the northern port city, according to police estimates as of Thursday afternoon. According to latest figures, there were 30 reports of light injury due to smoke inhalation.

The University of Haifa was also evacuated on as a precautionary move as fires raged closer.