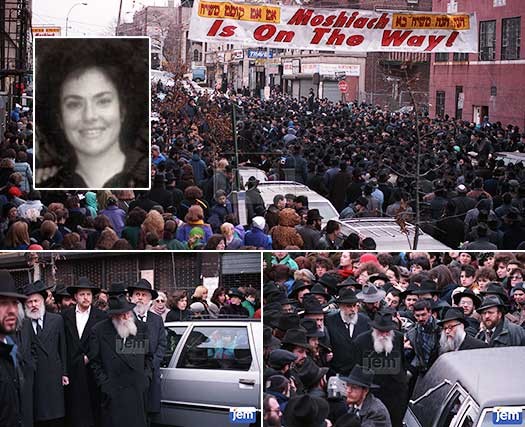 24 years ago, on the 2nd of Adar Aleph, Mrs. Pesha Leah Lapine, HYD, was murdered al kiddush hashem. The horrific killing shocked the community, and the Rebbe took it very personally – attending her Levaya with pain visible on his face. A gallery of photos from that Levaya was acquired and restored by JEM, and can be viewed in the extended article – along with the translated diary of an Israeli Bochur who transcribed his firsthand account of the events of that fateful day.

After the family completed Shiva, the Rebbe gave over a Sicha, which was seemingly more addressed to G-d than the people in the room.

The Rebbe said this in his address after the tragic murder of the wife and mother of young children:

One of the Bochurim learning in 770 that year compiled a diary of that day: [free translation from Hebrew]

Dozens of television crews and reports came to cover the story, and it was broadcasted live to many of the tv stations. Organizers asked the crowd to make a special effort to keep in an orderly manner and keep the peace in order to not make a chilul hashem.

Rabbi Yehoshua Hecht spoke about the nifteres, saying that according to Halacha it is prohibited from making Hespedim on Erev Shabbos after midday, that it is a great honor for the nifteres. According to our sages that whoever passes away Erev Shabbos it is a good Siman etc.

Around 2:00pm the Aron arrived and word spread that the Rebbe will be coming out to the Levaya.

At 2:00pm the Rebbe, escorted by his secretaries, whispering and his face visibly pained. The Rebbe watched the hearse on Eastern Parkway, which then turned down Kingston Avenue and the Rebbe continued walking until the Hachnosas Orchim building.

Before reaching the “Moshiach is on the Way” sign, the Rebbe raised his head and stopped underneath it and waited some ten minutes until the crowd passed him by. Afterwards, the Rebbe returned to 770, walking in the narrow sidewalk that is next to the wooden wall that surrounds the construction area. Near the cars parking place was a washing cup filled with water.

The Rebbe took it in his right hand, passed it to his left, and washed each hand t three times alternating and put the cup down on the chair, looked at the Mezuzah and entered his room at around 2:20pm.

A collection of photographs, taken by Reb Chaim Boruch Halberstam, was restored and made available by JEM’s Living Archive. It can be viewed by Clicking Here.