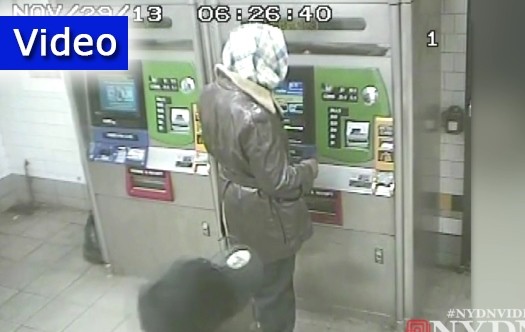 Have you ever arrived at the Utica Ave-Crown Heights subway station in a hurry to board the train, only to find that the MetroCard Machine was out of order? According to a recent police report, the machine’s malfunction may not have been a mechanical error, but the work of a criminal intent on forcing you to buy an illegal ‘swipe’ through the turnstile from him.

From The NY Daily News:

Jahmal Hatchette is a vandal, a thief — and a disaster of disguise.

During one crime shift in the subway, Hatchette tried to conceal his true identity by wearing a fur-lined woman’s coat. He kept the hood up and sported an oversize pair of glasses.

For another felonious outing, Hatchette went urban Arafat: leather jacket belted at the middle, a scarf draped over his head.

“He tried all sorts of things to cover his face: a hoodie, a baseball hat, skycap, big glasses, sunglasses, a lot of fishermen’s hats,” said a law enforcement source.

“He was very aware there were cameras around. He just thought he was concealing his identity.”

That thinking was as flawed as his fashion choices.

Based on video images, NYPD Transit Bureau police in January 2014 charged Hatchette with first-degree tampering for jamming MetroCard vending machines at the Utica Ave. subway station in Crown Heights, Brooklyn. He did it at least 14 times, authorities charged.

Hatchette is a “swiper,” a subterranean scammer who disables MetroCard vending machines. Typically this is done by stuffing a bent card or a piece of paper into the bill slot. Riders then have a choice: stand in the growing line at the one staffed token booth, which could be a block away, or buy an illegal swipe through the turnstiles. Good times.

Hatchette pleaded guilty to felony tampering in May. He was released from jail after promising to return for sentencing in July.

He must have missed his train. He never showed up.