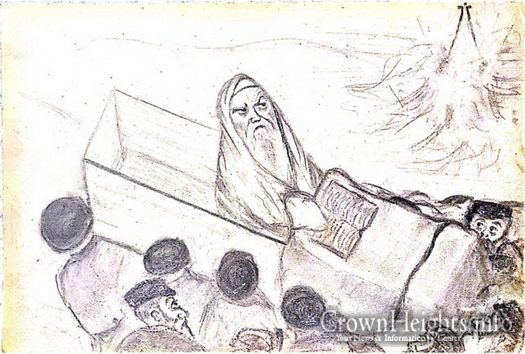 This coming Shabbos, the fifth of Kislev, is the yahrzheit of Reb Shlomo Eliezer HaLevi Eidels,[1] better known as the Maharsha[2], whose commentary on the entire Gemorah as well as on the Aggaditas (the stories in the Gemorah) are well known. This story took place towards the end of his life in the city of Ostroh, Ukraine, where he was the Rov.

When I mentioned to my son-in-law, Shloime Schwei, that I am planning on posting this story, he informed me that his grandfather, HaRav Schwei a”h would often repeat this story and even drew an illustration depicting it. (See the attached picture).

The road from the city to the Jewish cemetery passed by a church, (or according to another version the church was adjacent to the cemetery). Whenever there was a funeral procession the nearby priests would ring the bells and begin singing songs. Evidently, they were using some powers of witchcraft or some other power of impurity, and those Jews who had some doubts about Hashem and Judaism would be mesmerized by the hymns and would walk away from the procession and join the church, often undergoing a baptism.

The Jews didn’t know what to do. Seemingly, it put people in a trance and caused them to stray from Yiddishkeit. They wanted to figure out a way to avoid the church which was on the way to the cemetery. After much deliberation, it was decided they have no choice but to go on a long roundabout way o minimize the possibility of being ensnared by the church. (According to another version, they minimized the number of people in the procession only allowing members of the Chevra Kadisha to attend. Even family members were instructed not to go). Obviously, this was a draconian decision, but they felt they had no other choice.

When the Maharsha felt that his time has come to pass on, he instructed the Chevra Kadisha to place a copy of his sefer on his coffin and use the regular road to get to the cemetery. Out of respect for their beloved Rov everyone decided to participate in the funeral procession, hoping that the merit of the Rov would protect them.

The priests were informed that there will be a large procession and they began to prepare for it. They were hoping to ensnare many Jews in their trap. Sure enough, as the procession began to pass by, they pulled the ropes for the bells to ring and began chanting their songs.

At that moment, those who were carrying the coffin felt a movement and they stopped for a moment. Suddenly to everyone’s bewilderment the Maharsha began to sit up and started leafing through his sefer, turning one page after another. Everyone stood transfixed and just stared in amazement at this sight, and no one noticed or was looking at the church which was slowly descending into the ground.

When the Maharsha concluded leafing through his sefer, he returned to his laying position and there was an eerie silence. Looking up they noticed to their shock that the church was no longer there; it had been completely swallowed in the ground, with everyone inside it.

The question is, although it is an interesting story, (not the typical story we normally repeat), what message does it convey? What relevance does it have to us nowadays? Why would mashpiim tell this story at a farbrengen?

The world has powerful forces, the allure of fame and pleasure. It is extremely powerful and can ensnare anyone, but it is especially powerful and dangerous with those that may have a doubt, for whatever reason.

Some people are able to withstand this pressure and temptation, while others don’t have that ability. They are ensnared and captivated by it. They don’t have something of equal interest to combat it.

The Maharsha demonstrated that not only does the Torah have a power equal to it, its strength is so powerful, that when the two are facing each other, the allure of the “church” and everything it represents, has no power whatsoever.  In fact it no longer exists.

However, it is not enough to say that I learned for many years when I was a yeshiva student and I now have sufficient knowledge.  The Maharasha wrote his commentary and had it placed on his aron, demonstrating that the only way to combat this allure is by constantly opening and studying.

So in this month of Chodesh Kislev, the month of Chassidus, it is an appropriate time to recharge our batteries and learn extra Chassidus. Join the Likkutei Sichos project or a shiur in maamaorim, and you will view the world from a Chassidic perspective, that the world is here to help me (perhaps by challenging me) to serve Hashem better.

This weeks article is l’zechus my sister Chaya Rivkah bas Cheyena, may she merit an immediate and speedy recovery, together with everyone that needs a brocha.