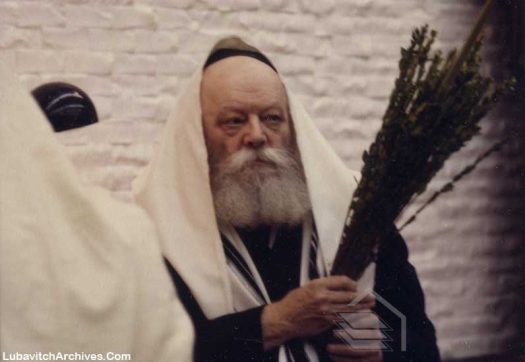 While I wasn’t planning on posting anything this week as it is chol hamoed and Simchas Beis hashoieva, however, during some farbrengens I mentioned something that I thought was known, but people were surprised that no one else mentioned it. Evidently it is not well-known. So I thought that many may find the following observation, important.

During Hallel we shake the Lulav four times. The first time is by Hodu, and the last time is also by Hodu. The second and third time is by anah Hashem.

I noticed once and then I continued to check throughout Sukkos, year after year, and I realized that it wasn’t just a happening but it was intentional.

I am not certain as to why the Rebbe did so, but I understood that to mean that the Rebbe wanted to separate between them that it should not be one long shaking but two separate shakings.

I appreciate your feedback and may all of klal yisroel, collectively and individually be blessed with a shana tova umesuka.

Rabbi Avtzon is a veteran mechanech and the author of numerous books on the Rebbeim and their chassidim. Farbreng With Reb Pinchas Reizes was just reprinted and is now available in hard cover. He is available to farbreng in your community and can be contacted at avtzonbooks@gmail.com