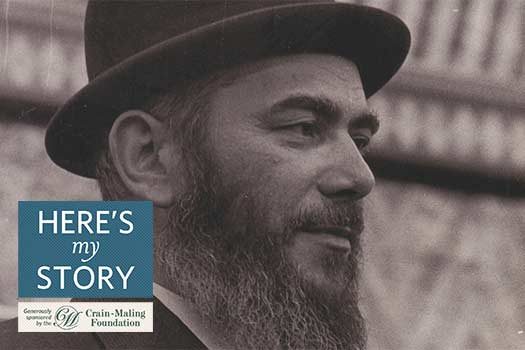 I am the son of Rabbi Chaim Gutnick, who fled Europe during World War Two and made his way to Australia, where I was born. In his work as a community rabbi, my father was very much guided by the Rebbe, and I would like to relate here a few anecdotes which my father had shared with me.

In 1965, my father came to visit the Rebbe and complained to him that although he was known as a great orator who could make people laugh and cry at the same time, and who was invited to speak in many places, he felt that he wasn’t making a real difference. “I must have given thousands of speeches in my career,” my father told the Rebbe, “but how many of them have really hit home? How many people have been moved by my speeches to actually change their lives?”

The Rebbe responded, “If you speak sincerely and you speak with passion, your message will enter the hearts of others, whether you know it or not. But if you really want to see the effect of your words, then you must speak about practical things, not just concepts. Instead of just talking about Shabbat or kashrut in general terms, you should urge the audience to try to fulfill these mitzvot as much as they can. Give them something practical to do – even if it’s just one little thing. And then you will see results.”

My father was impressed by the Rebbe’s advice and put it into practice immediately. When he spoke about Shabbat now he asked the non-observant in his audience to begin by not lighting a fire on Shabbat, by giving up one little thing – smoking. He said, “I want you to do me this personal favor. Your doctors will say it’s good for you, and as your rabbi, I’ll also say that it’s good for you.”

Not long after he gave this speech, my father saw in the synagogue a man he knew, a Holocaust survivor, who was not Torah observant. After the man appeared for the third consecutive Shabbat, my father approached him and asked him what brought him there. The man answered, “I heard you speak about not smoking on Shabbat, and when I went to work the next Saturday, I decided to do you that personal favor and not smoke on Shabbat. But then I thought to myself, if I’m already giving up cigarettes because it’s Shabbat, what am I doing here sitting at my office? So I got up, and I came here. And now I think I’ll continue attending synagogue and maybe I’ll even make Kiddush.”

That was the wonder of the Rebbe’s advice – one little point, one little request can open up worlds. And, after my father shared this advice with me, I have also followed it. There is not a speech that I’ll make where I won’t give the audience at the end some small practical thing to take away with them.

Another remarkable story concerns a sixteen-year-old girl from Balaclava who wanted to convert to Judaism. After my father saw how sincere she was, he brought her before the local rabbinical court, but the judges turned her down; they reasoned that she was too young to make such a momentous decision, though they invited her to return when she was of age.

But the girl became so anguished that she was unable to become Jewish that she fell ill. She’s wasn’t eating, she wasn’t sleeping, and her parents were very concerned about her. At that stage, my father suggested she write to the Rebbe for advice. She did this – she wrote a long letter explaining why she felt she had to be Jewish, pleading her case for conversion. But she received no response. Instead, the Rebbe wrote a postscript in an unrelated letter to my father, asking, “What’s happening with the Jewish girl from Balaklava who wrote me that long letter?”

My father was puzzled – why was the Rebbe referring to her as “the Jewish girl” when she was a prospective convert? Understanding this was a message, my father, together with another rabbi, immediately set out to see her parents. After much discussion, the mother finally admitted that she herself was born Jewish but had decided to deny her identity because of the Holocaust.

So, having a Jewish mother, the girl was in fact Jewish and didn’t need to convert. She ended up becoming part of the community, getting married and raising a fine family.

This story has become famous, but there is an addendum which few know.

Some time after these events, my father had an audience with the Rebbe and felt compelled to ask how the Rebbe knew that this girl was Jewish. “Among chasidim it’s accepted that the Rebbe knows these things,” he said, “and I do not mean to be chutzpadik, but I would just like to ask for a mundane, rational explanation.”

The Rebbe smiled and said, “Only a Jewish girl could have written such a letter.”

Afterwards, my father impressed upon me and the rest of his children that the Rebbe was looking after us all – not just in a removed way, “from above,” so to speak, but in a very rational way. We can be sure of this, my father said, from the example of the Rebbe’s concern for this Balaclava girl who had lost her connection to the Jewish people. The Rebbe brought her back into the fold because the Rebbe looks after every Jewish soul. And this is why we must do the Rebbe’s work.

My father was himself very dedicated to the Rebbe’s work. On one occasion, the Rebbe instructed him to go to Tasmania, a remote island 150 miles south of Australia’s mainland, and to check on the Jewish community in Hobart. Of course, my father went. At the time, the city had one defunct synagogue and, as he wandered the streets, my father was very puzzled by the Rebbe’s directive, not sure what he was doing there.

As was his custom, my father was wearing his rabbinic garb – a black suit, a Homburg hat – so he stood out, and a woman approached him, asking, “Are you a rabbi?”

When he said he was, she started crying, and her story came pouring out. She said that she and her husband were Jewish, but not knowledgeable about Judaism and not observant. Recently, they had been approached by a Christian missionary group that made a strong impression upon them. The couple was left very confused. In the midst of this, the woman had prayed to G-d for clarity and asked for some sort of sign.

She had asked this of G-d just the day before, and now, suddenly, she sees a rabbi walking around here in Tasmania! This was a sign if there was ever one.

My father ended up talking to her and her husband for a long time and managed to convince them to embrace their Jewish roots. After they did, for some time he used to send them kosher meat and other kosher food until they moved to Melbourne, where they became fully Torah observant – they, their children and their grandchildren.

As far as my father was concerned, this was the only reason that the Rebbe suddenly sent him to Tasmania – to save these lost Jewish souls.

Rabbi Mordechai Gutnick is based in Melbourne, Australia, where he presently serves as the Rabbi Emeritus of Elwood Talmud Torah Hebrew Congregation, as the senior judge of the Melbourne Jewish court, and as the rabbinic administrator of Kosher Australia. He was interviewed in May, 2013.