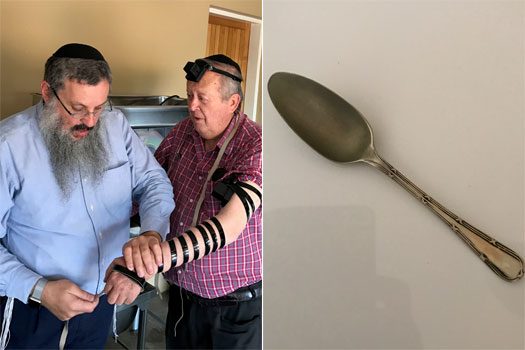 Two months ago, I had the honor of meeting Reb Chaim Reisner, who has devoted the last twenty some years of his life to publicize the Rebbe’s call of publicizing the Sheva Mitzvos Bnei Noach (the 7 Noachide laws). He told me, that in addition to what the Rebbe quoted from the Rambam about elevating the people of the world, he has seen that it arouses dormant memories and allows assimilated Jews to rediscover who they really are.

When their neshomah hears about something of holiness it becomes inspired, and this can lead to a greater transformation. Then a few weeks later I received the following story from Reb Shraga Jameson of South Africa, which brings out the point somewhat differently. This story that he sent me occurred in Johannesburg, South Africa last year.

Being that in the Alter Rebbe’s maamar of Ani L’dodi, (which discusses the meaning of the month of Elul), he discusses the aspect of bringing back a Jew from MISHUM [a wilderness which is completely bereft of G-dliness], I decided to post this story in honor of Rosh Chodesh Elul.

If anyone wants more information about Reb Chaim Reisners’ projects or desires to help him spread the Rebbe’s word, please contact him at hreisner@gmail.com or look up the organization asknoah.org

My family background comes from the meat business. We make sausages – the best sausages in the whole world. The problem is that it is hard work. On top of it being hard work we have had a small manual sausage filler which was broken so I have been looking for a replacement sausage filler. Not only that but we need a particular spice and to make a batch of sausages you need 60g of the spice.

So I phoned one of the local spice houses and they tell me that whilst they have the spice it comes packed in 25kg bags. 25kg is crazy – there must be someone who sells it in smaller quantities, the sales rep tells me that there is a company called Africa Spice and Africa Spice may sell it in smaller quantities, and I should phone them. They do and sell me one kilogram.

While I was talking to the salesman at Africa Spice, I asked him if he knew of someone who could fix my sausage filler or someone who has a second-hand sausage filler to sell. He replied that it was funny that I was asking, because just this week an old Italian customer of theirs phoned to say that he is selling all his equipment and he has a sausage filler and do they know anybody who wants a sausage filler. So he gave me his number. The man’s name was Tommy.

I phoned Tommy and he said that he has a sausage filler and he is waiting for some parts for it to be fixed but I could come and see it. I told him that we were closed for Yom Tov on Monday and Tuesday but I will be back on Wednesday and it was arranged that I go to see him on Wednesday.

I drove to his house and there was the sausage filler, we were standing talking about sausages and had an argument about who makes the best sausage in the whole world. The interesting thing is that he owned a butchery shop on the corner of Jeppe and Rissik Street and my Uncles butcher shop was on the corner of Kerk and Rissik Street – one block away. So he knew my uncle. When we were finished arguing about the sausages he says to me “come on are you Jewish?”. So I look a little Jewish with the beard and a yarmulke! I said “yes – of course”! So he said that his wife had a story that she needs to tell me.

So this is his wife Carla’s story.

She was a little girl who lived in a town in Italy called Vicenza. From what I understand Vicenza is close to Padua which is close to Venice and she lived in a home with her parents and her grandparents. Her grandparents owned an Inn just outside the town. The Inn was on a small little farm and they had some grapevines and they made wine and they hosted people.

When she was 10 years old the Nazis (Yemach Shemom) invaded. The Nazis took over from the Italians and the Inn was commandeered by the SS, and into the inn moved 20 SS Officers. Her family was forced to live in the stable whilst her grandparents were allowed to live in the Inn but they were forced to take care of these Nazi Officers. One of the things that the Nazis insisted is that the family eat breakfast and dinner together with them each day. Her grandmother and her mother had to cook the meals, and serve them.

Her grandfather after a few weeks came to them and said that “from now onwards as he could not stand this arrangement and he needed some private space – he needs a place where he can take care of his emotional wellbeing – the cellar is now off limits to everybody except him. Every night whilst he was forced to sit with the Nazi Officers to eat – he did not eat – and at the end of the meal he made sure to collect a significant portion of the leftovers and he would take it to the cellar and eat it on his own. This continued until the end of the war.

At the end of the war the grandfather called the family together. The Nazis were gone. He introduced them to a young family that were in the Inn. The family name was Katzenellenbogen and he revealed the secret as to why they had not been allowed to go to the cellar because for nearly two years they had hidden this Jewish family in the cellar underneath the Inn that housed these 20 Nazi Officers and no one was allowed to know about it. Mrs Katzenellenbogen came from a very wealthy family and they had lost everything. They had first been dispossessed of everything, and were then sent to a Ghetto from where they escaped and happened to come to Carla’s grandparents, but she had managed to save only one item from her previous life.

When she had got married her mother had given the young couple a sterling silver canteen of cutlery as a present, and when she left her house she had managed to take with her only one sterling silver spoon. She insisted on giving this spoon to the Innkeeper’s wife as a token of appreciation for having saved the lives of her her husband and their two children.

The Innkeeper’s granddaughter finally left Italy and when she was leaving her grandmother said to her. We don’t where you are going- but make sure that you never lose the spoon and that it stays in our family. This is a spoon that tells a story of its own.

Tommy’s wife then went upstairs and she came back and showed me the sterling silver spoon – it represented the saving of the life of four Jews. Whilst she is telling this amazing story – her husband who has a serious case of verbal diarrhoea is chirping that he is convinced that he has Jewish blood, he has always worked for Jews and he likes the Jews a lot and I am thinking that usually when someone says “their best friend is a Jew” is never a good sign. He said to me that he is a good Catholic but he knows somewhere inside he has Jewish blood. Carla then she tells me that he may be right as a few years ago a cousin of his went to visit Auschwitz. The cousin’s surname was Rubini and he says that Mr Rubini walked into the gates of Auschwitz and he became instantly cold and he cried for the full two hours that he was at Auschwitz, and he knew at that point in time that he had to be Jewish. This is the cousin of the man that I have been dealing with whose name is Augustino Casosolla. So I said “what about you – are you Jewish how is it that your cousin is?” and he said that he does not know who to ask.

At about 8.30pm on Thursday morning my phone rings and I answer the phone. It is Augustino. He says “Shraga I have to tell you a story I don’t know what it means, but this is what I found out”. I phoned my sister in Italy who is 90 years old and I asked her what is the story with our family and the Jews, and she told me that she does not really know but all she has is a scrapbook from their mother which has in it an invitation from his grandmother’s sister’s to her sons’s bar mitzvah. I told Augustino that I was comping to visit, so on Thursday afternoon, I took my son Yosef and the two of us drove out to Glenvista a suburb to the far south of Johannesburg, and we were very privileged to give Augustino at 83 years old a bar mitzvah for the first time. We put on tefillin with him, we said Shema with him – I said the words and he followed and at every single word he cried like a baby whilst wearing teffilin. When we came to the word “ mezuzot “ in the recitation of the Shema he got all excited and he said that that is the thing that the Jews put on the door – the only thing he knew.

So thank g-d we were able to find this Jew in the week before he leaves to go back to live in Italy to see out the rest of his days – 83 years old . He is here for one week and we found him in that week and we were able to give him this very special present of being able to put on teffilin once in his life.

Incidentally for such a special spoon, even though she wouldn’t sell it to me, i was able to polish it, so that it looked beautiful.

I thank Reb Betzalel for sharing this with me this story and once again turn to you the readers of this post, to please share such wonderful and inspiring stories with me at my email address, so I can share them with the larger audience.

Rabbi Avtzon is a veteran mechanech and author of numerous books on the Rebbeim and their chassidim. He is available to speak or farbreng in your community and can be contacted at avtzonbooks@gmail.com