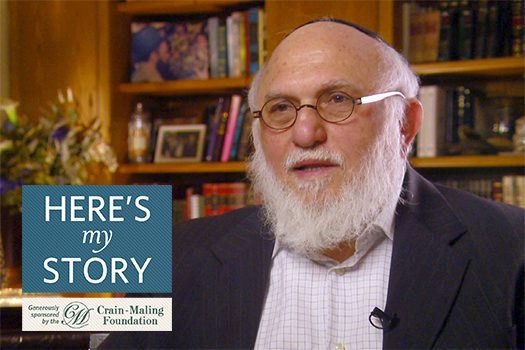 I am a businessman, an industrialist. And the story I have to tell here is how my family – despite the indisputable logic of the naysayers and despite our own finely-honed business sense – invested in a textile business in Israel, knowing it would be a losing proposition. We thought of it as a charitable donation, a short-term loss, because there was no way this business was going to survive long-term.

Why did we do it even when we knew we shouldn’t?

We did it because the Rebbe said to do it, and we were followers of the Rebbe. And despite all the predictions to the contrary, despite our own worst expectations, the business succeeded. It succeeded not just modestly, but hugely – not just in Israeli terms, but in American terms, in global terms thank G-d.

And the only explanation that I have why it succeeded, where logically it should have failed, is that the Land of Israel is especially blessed by G-d (something which the Rebbe understood better than any businessman), and that – in addition – this particular venture was directed and blessed by the Rebbe himself.

The story begins with the passing of my mother in 1951, when I was four years old. My widowed father, a Holocaust survivor, a Bobover chasid – who was then coping with three small children, while living in the Bushwick section of Williamsburg – went to get a blessing, at the urging of a friend, from the new Lubavitcher Rebbe. The Rebbe tried to give him fifty dollars, which he refused because he was too proud to take the money, but the Rebbe also blessed him and that blessing has followed our family to this day.

I myself married into a Chabad family. My father-in-law, Reb Dovid Deitsch, was especially close to the Rebbe, and he had a plastics business which I joined.

After the devastating Yom Kippur War of 1973, my father-in-law asked the Rebbe what he should do to help Israel. He was sure that the Rebbe would tell him write a check to some Chabad organization doing good works in the Holy Land, but the Rebbe’s answer proved starkly different. “Open up a business in Israel, he said. “The new immigrants need jobs. Build a factory there – you will be very successful and it will benefit many families.”

My father-in-law didn’t think such a venture made business sense, and he didn’t do anything about it at first. But the Rebbe persisted. Each time we went for a blessing, the Rebbe would ask, “Reb Dovid, what’s happening with the business in Israel?”

Truth be told, none of us – not my father-in-law, not his children, not his sons-in-law – were interested in this project. Our advisors told us it would be a total loss. So the explanation that my father-in-law gave the Rebbe was that we were trying – and we did actually try – but that we were having problems with the Israeli bureaucracy (we still are).

To start a business in Israel, we faced one stumbling block after another – we needed permits from the government, approvals from the ministries, etc. It was a very hard project, and I had been put in charge of it. I was flying back and forth, and I was weary of it. So, I tried very hard to convince my father-in-law to convince the Rebbe that we should walk away from it.

In fact, I myself discussed these issues with the Rebbe during an audience in the summer of 1976. But instead of accepting my argument that we should give up, the Rebbe said, “How do you expect to run a business if you’re not there on the spot?”

That was not – by any means – the response I was anticipating. But the Rebbe pointed out that, since it was summer, this was the ideal time to move to Israel for the year, as the kids could begin school in September.

This was very tough thing for me to accept. I thought of living in Israel as a jail sentence, but my wife took the news well. So following the Rebbe’s recommendation, we made the move into an apartment in Nachlat Har Chabad in Kiryat Malachi which was a quarter of the size of our home in Crown Heights.

After a year there, I told the Rebbe that I couldn’t take it because of all the frustrations I constantly faced, and I tried to convince him that we should return home. In response, the Rebbe said to me, “The hard times are behind you now; from now on, it will be easier.”

Suddenly, doors which were shut before started opening up – with the ministry officials, with the customs officials, with the banks. I was making many new friends. At one point, I was introduced to Prime Minister Menachem Begin who amazed me by saying, “When I last visited the Rebbe, he spoke to me about you. I hope you won’t have any more problems from now on.”

And that’s how our factory – Flocktex Industries in Nachlat Har Chabad, later the producers of the famed Impala fabrics – started running in the late 1970s.

We were the first manufacturers in the world making a velvet-type fabric for curtains, a special dense fabric that would not admit light and did not require a lining. Not only that, it was a soft fabric, a unique product which became very much in demand in England and the world over.

At first, England proved to be a hard-sell because they required that upholstery fabrics be flame-retardant. Applying the flame-retardant chemical made the fabric stiff, but we figured out a way around it. We conducted tests in our laboratory, and we were sure our fabric passed all standards, but these costumers were not satisfied. They wanted a certificate from an English laboratory, which failed us repeatedly.

I asked the Rebbe for his blessing three times before the English laboratory finally approved our product. When I asked him for the third blessing and saw how puzzled he was by the request, I realized that the English test was not being done properly, for whatever reason. So I sent our head chemist over there to stand and watch, and then we passed.

As the global demand grew, we built a second and then a third plant, increasing production all the while. Today, although – as a privately-owned enterprise – we are not the largest company in Israel, we are one of the country’s most successful textile producers – our velvet is considered the best velvet in terms of quality control, the latest in design, and this has built our reputation the world over.

Would any of this have happened without the Rebbe’s insistence?

I thank G-d that, even though we all thought that we were going to be a failure in Israel, we followed the Rebbe’s advice. Because we did, we are here today running a business that provides a livelihood for over one-hundred families. And for this the Rebbe gets all the credit.

Mr. Mayer Zeiler resides with his family in Nachlat Har Chabad, Israel, where he directs Flocktex Industries. He was interviewed in January, 2008.