« Campus Shluchos Hone Fundraising Skills
8:00pm: Should Children Ever Be Separated from Their Parents? » 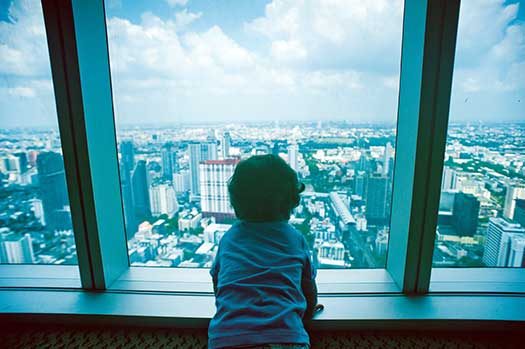 Last week a parent came over to me and asked for a quick story to share with his son’s class. Since the story that I shared was about the Frierdiker Rebbe, and this Shabbos is the Shabbos before Yud-Beis Yud-Gimmel Tammuz, his yom yoledes (birthday) and his new kapital is chapter 139, as well as his chag hageulah (day of redemption), I decided to share it with the readers of this series.

One day when the Frierdiker Rebbe was in the cheder (class) in Lubavitch, during the class break, he and some of the other boys glanced out of the window.

Now think for a moment about what he would be seeing through the window in the small town of Lubavitch. Perhaps he would see a cow, or some other animal, pulling a wagon or carrying a load on its back. Or maybe he would see the person who earns his livelihood by delivering some water, or logs etc. After all, the actual town of Lubavitch did not have that many inhabitants.

His melamed (teacher) noticed what he and other boys were doing. He came over and said, “Instead of looking through the window when you are inside and seeing what is happening on the outside, it should be the opposite. When you are outside, you should look at what is going on inside.”

When I first heard this story, the mashpia mentioned two points:

The mashpia then paraphrased the melamed’s statement. “I noticed that in the last month, some bochurim were discussing their summer plans during the time they were supposed to be learning. That is akin to when you are inside, you are looking outside.

Take this vort that the Frierdiker Rebbe repeated to heart. Now you are going out of the Yeshiva for the summer months. True it is to inspire younger children to have a chayus (vitality) and geshmak (enjoyment) in Torah and mitzvos. But you are going to be “outside”, you don’t have the same schedule that you had until know.

But at that time you should realize, where are the real stuff? Where should your heart and desire be? It should be looking inside into the schedule and purpose of a bochur, and this also applies to a baal habus.

You now have the opportunity to learn the mammar, sicha, perek, halachah, navi etc. that you always wanted to, but the time constraints of the Yeshiva’s schedule didn’t allow you that opportunity. Now you have it.

By doing so you are demonstrating who and where you really are, as our sages state that the place a person’s thoughts are, there he is.”

May everyone have a healthy and happy summer.

P.S. In middle of this week I responded (on crownheights.info) to the comments on last week’s story, that in my opinion were somewhat blindsided because of a detail that I omitted.

Also bezras hashem, next week I will devote the story to respond to one of the question on the story of two weeks ago about the mitzvah of tzitzis.

Rabbi Avtzon is a veteran mechanech and the author of numerous books on the Rebbeim and their chassidim. He is available to speak or farbreng in your community and can be contacted at avtzonbooks@gmail.com

« Campus Shluchos Hone Fundraising Skills
8:00pm: Should Children Ever Be Separated from Their Parents? »