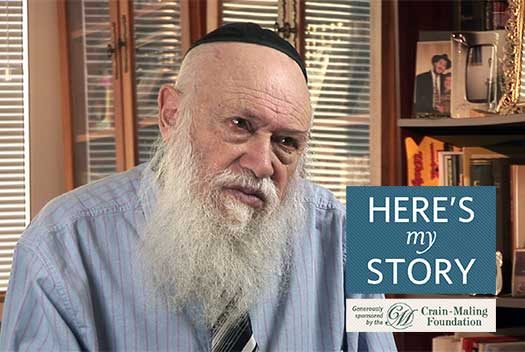 Here’s My Story: The Matter is in Your Hands

When I was four years old, all the Jews of my birthplace – Gura Humorului, Romania – were deported to Transnistria, where most perished at the hands of the fascists allied with the Nazis, including my own grandmother. My family and I survived and, in 1950, just before my Bar Mitzvah, we managed to leave Romania and immigrate to Israel.

Once in Israel, I went looking for a yeshivah and, although my parents were Vishnitzer chasidim, by chance I ended up in a Lubavitcher yeshivah in Lod. There I learned for about eighteen months before my father, worried about my ability to earn a living in the future, took me out and sent me to learn car mechanics in Tel Aviv.  When informed of my plan to leave, Rabbi Yonah Edelkopf suggested that I write to the Lubavitcher Rebbe for advice.

I was shocked at the suggestion. Who was I, a fifteen year old teenager, to be writing to the Rebbe?! But he persisted in trying to convince me that I should. When he told me, “Write to the Rebbe that Yonah Edelkopf told you to write,” he finally succeeded in convincing me.

So I wrote, explaining my family situation and my reasons for leaving. The Rebbe responded:

It is clear that since, through miraculous circumstances, you have merited to enter a yeshivah …  you must recognize how you are being assisted from on high to follow a path which is good for you materially and spiritually. And you should also understand that, in order to test you, thoughts occasionally fall in to you mind about abandoning your studies. You must get rid of these thoughts … Clearly, when the time comes for you to support yourself, the One who sustains all living will also provide a livelihood for you … A person’s livelihood depends exclusively on the Holy One Blessed Be He, so connecting with his Torah and mitzvot now are a great way to help you earn a living later on, while leaving the tent of Torah too early will only disturb this …

However, despite the Rebbe’s advice, I wound up leaving the yeshivah to become a mechanic’s apprentice in secular Tel Aviv. To do so, I cut my long side-curls, my long peyot, which I knew my employer and co-workers would consider strange. I didn’t want to feel ashamed in front of them.

One day, however, as I was coming home from my apprentice job covered in dirt and oil, I began to feel bad that I had left the yeshivah, and so I wrote to the Rebbe again. And, as before, and as many times since then, he answered.

… The matter is in your hands, if you truly want to “be Chabad,” as you write, there is nothing that can stand in the way of your true desire. The way to this is by learning Torah with devotion, and not by making extra calculations and expecting results at every step of the way … First of all, fulfill what is written at the beginning of the Code of Jewish Law, “do not be ashamed before the scoffers” … We are assured by our sages that if you toil, you will find …

As before, the Rebbe blessed me to succeed, and this time I did. I managed to put the worries about my future livelihood aside, and I returned to yeshivah to study Torah. I must mention that the Rebbe was completely right. G-d has provided for me, my children, grandchildren and great-grandchildren. All of them are chasidim and every one of them has a good livelihood. And I am very happy that I took the Rebbe’s advice and returned to yeshivah.

When the wedding date was set, I came to the Rebbe and asked him to officiate at our wedding. I knew that he no longer did this, but I thought I had a good argument for an exception. I stressed that I was alone in New York, since my parents were living in Israel and unable to come for the wedding. “I am very depressed about getting married all alone, so please Rebbe, do this for me,” I pleaded.

The Rebbe heard me out, but he declined to perform the ceremony. However, he assured me that he would still be with me at the time of my wedding. “When you are being led to the chuppah,” he said, “let me know, and I will think of you. When I think about you, it is exactly as if I’m there, giving you my blessing. In spiritual matters, time and space are not a separation.”

Hearing this, I totally dissolved – the Rebbe would be with me in spirit. I know that to some people this concept might sound strange, but I see it as similar to what happens when we communicate with people via Skype. They might be in Australia, yet they are there with us via the computer monitor. We can see them and hear them. This is a good analogy for how a spiritual connection works. The other person might not be physically close to us, but he or she is still present where we are. This is how I understand this concept, which has sustained me even after the Rebbe’s passing. Although I cannot see him or talk to him, I know that this is not a barrier to my continued connection to him.

After some years of being married and raising a family, I let go of an important Chabad practice, which was instituted by the Previous Rebbe, to study Chitas every day. Chitas is an acronym for Chumash (the Five Books of Moses), Tehillim (the Book of Psalms) and Tanya (the seminal work of the Alter Rebbe, the 18th century founder of the Chabad Movement), which are studied in daily portions.

I was busy with work, and I couldn’t do all that. Then some problems came up, and I wrote a long letter to the Rebbe asking for his advice. He answered – because he always answered – but he did not respond to my questions. He only wrote one word, “Chitas?”

I understood that the Rebbe somehow felt that my connection to him as a chasid was growing weak, and that he attributed it to my laxity with this basic Chabad practice. But I didn’t take his message to heart.

A couple of months went by and my problems continued, so again, I wrote to the Rebbe. And, again, he answered, “Chitas?”

So, finally, I started to learn Chitas. And when I did, when I had reconnected to the Rebbe, he answered all the questions which I had sent in – one by one.

Rabbi Aaron Dalfin is presently retired from his sweater manufacturing business and spends his time learning Torah. He was interviewed in December of 2010.