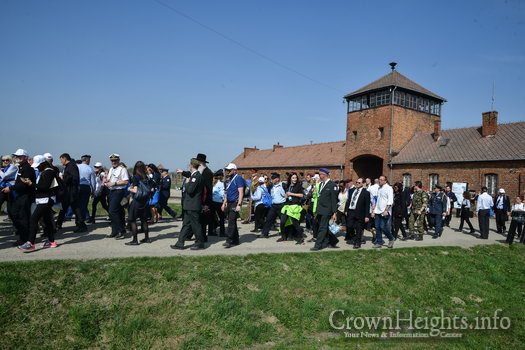 March of the Living

A few weeks ago was the 30th International March Of The Living in Poland, which was attended by tens of thousands. Many of them were survivors of the holocaust and/or their family members, while others were just concerned individuals. Rabbi Nissan Mangel, one of the youngest survivors of numerous concentration camps was a featured speaker throughout the event. This past Shabbos, parshas Tazria-metzorah, he related one of the more powerful and moving moments.

I was interviewed by a highly respected reporter of one of the main Television stations. The understanding was, while we will be speaking in English, the station will be translating it simultaneously into Polish, with subtitles. As the hour long interview was coming to a closure, the moderator said, Rabbi Mangel, I will like to ask one final question. The question is, what is the future of Judaism in Poland?

I replied, our sages teach us that a Roman governess asked the Jewish scholars the following question; “Your religion believes that there is techiyas hameisim (the dead will come back to life). That means that the same person and body comes back to life. That can be understood if you are speaking about a recently deceased person. So then the Creator gives life to the dead body.

“However, what are you going to explain when it comes to the bodies of earlier generations of hundreds and even thousands of years ago? Their bodies have decomposed, so if there is a new life, it is not them that are coming back to life, it will be new bodies.”

The sage replied, there is a bone in the vertebrae (the spinal column, which in Hebrew is called the Luz bone), and that bone does not decompose. You can try to shatter it with a sledge hammer, burn it in a fire or place it in an acid, yet it will remain intact. That bone belonged to that persons body and from that bone all those who are brought back to life, will live.

Based on this I will reply to your question.

The chimney of the crematorium was at least 14 meters (around 40 feet) high. There were times that the fire was so powerful that instead of ashes coming out of the chimney top, we witnessed flames, so it was an incredible powerful fire. Yet at the end of the day, when the ashes of the bottom of the crematorium was shoveled out, there were small bones among them. No one understood how those bones survived the fire. Now I know that it was that bone that our sages were talking about.

Before the war, the Jewish population in Poland was around three million. After the war there were only seven thousand Jews left in Poland. That means that almost ninety-eight percent of Polish Jewry were killed or banished from their homeland.

From the remaining two percent that remained in Poland, more than half of them were afraid to identify as Jews, they hid their identity. So indeed we were decimated.

But the small bone can not be destroyed. Now over 70 years later, look at the Jewish communal rebirth in Poland. Yes, it is like the rebirth of the dead.

So you want to know about the future of Polish Jewry, it will blossom.

The following day, a lady from one of the prestigious magazines came to interview me. In the course of the conversation, she said a few Hebrew expressions and I asked her if she is Jewish. She replied, NO, but I visited Israel and I picked up these expressions.

As the interview was coming to an end and I was about to leave, the reporter who interviewed me the previous day came into the room and said, Rabbi will you please respond again to the question I asked you yesterday, at the end of our meeting?

Although it was late, I felt that it would be better if I oblige than to say I am late, so I repeated it.

They both thanked me and he walked me to where I had to be.

On the way there he said, Rabbi I have to tell you; after you left the interview yesterday, I sat in the office for five minutes, I was shaking from emotions. I am a child of one of the Jews who hid their identity. No one in the corporation knows that I am Jewish. In fact besides the few Jewish friends that I am associated with, who also hide their identity, no one knows that I (or they) are Jewish.

But I decided to act on what you said, you ignited the flame in that little bone that you were talking about and I announced to everyone that I am being rejuvenated and I am stating publically that I am a Jew and will live like a Jew.

The lady who just interviewed you is also Jewish and she was baptized, therefore if you ask her if she is Jewish, she would reply, No!

Therefore, I wanted her to hear it from you directly that she too should realize who she really is and declare her birthright as a Jew. So I came to you as the interview with her was ending and I know she will put it in the article. Knowing her I am positive she too will declare her Jewishness!

Hopefully hundreds and thousands of our brothers and sisters that will see you on the Television and / or read the article she will write, where this statement will be a headline and will be inspired as well.

Rabbi Atzon is a veteran mechanech and the author of numerous books in the Rebbein and their chassidim. He is available to farbreng in your community and can be contacted at avtzonbooks@gmail.com