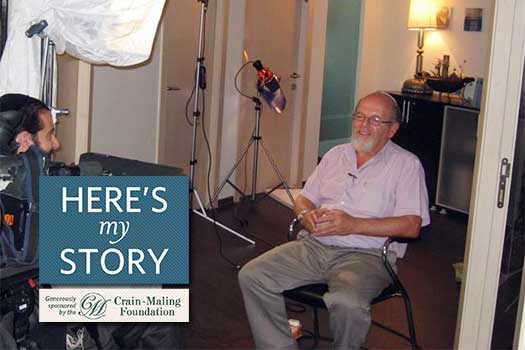 When the Rebbe took forty minutes to speak with Benjamin Netanyahu during Hakafos on Simchas Torah, it made a profound impression on Alan Baker, who was the senior legal officer of Israel’s mission to the United Nations – where Netanyahu served as ambassador.

I was born to a traditional Jewish family in England, where I grew up. I studied law at University College in London and then at Hebrew University in Jerusalem.

Since 1969, I have lived in Israel where I spent many years as a military prosecutor in the Gaza Strip and the Sinai, as well as serving as a legal advisor to the IDF on issues of international law and human rights law, following which I moved over to the Foreign Ministry as a legal advisor.

During my time with the Foreign Ministry, I was sent to New York, where I worked for four years as a senior legal officer to Israel’s UN Mission.

During that time Benjamin (Bibi) Netanyahu was ambassador to the United Nations, and I used to accompany him whenever he would visit Jewish religious venues and, in one instance, to visit the Lubavitcher Rebbe.

Part of the real reason why Bibi wanted to meet the Rebbe was the strong connection that all Israeli ambassadors and foreign ministers and prime ministers had with him. At the time, Yitzchak Shamir was prime minister, and he had appointed Bibi as ambassador to the United Nations. Shamir had been in contact with the Rebbe, and I assume that he recommended that Bibi pay him a visit. When we came, it was Simchat Torah during the Hakafot ceremony. We were brought straight up to Rebbe, and he talked with Bibi and myself for about forty minutes, which I found extraordinary.

During the entire exchange — and this also impressed me immensely — the Rebbe spoke to us in perfect Hebrew. That is, not in biblical Hebrew but in regular modern Hebrew, in which he was obviously very fluent.

The discussion concerned Middle East security. At that time, Shamir was involved in negotiations to withdraw Israeli forces from Lebanon, and the question of whether Israel would withdraw or not was still open. Ultimately, Israel did withdraw, but the Rebbe was very insistent that Israel shouldn’t do it at that moment in time. (At the outset of the war, the Rebbe had urged Israel to eliminate the terrorists quickly and forcefully and then to pull out of Lebanon, but in late 1984, when this meeting took place, pulling out was a retreat of sorts.)

“You went into Lebanon in self-defense, because there was terrorism emanating from Lebanese territory,” he said. “As well, you’re in a state of hostility with Syria. If need be, you should continue going forward even into Syrian territory. It’s Israel’s right to protect itself.”

Several times, he repeated, “Yad chazakah uvizroah netuyah — With a strong hand and an outstretched arm…” Meaning, that we should stand strong. This was the message we were meant to bring to Shamir, and he stressed this repeatedly.

The Rebbe also seemed very keen to advise Bibi that, as UN ambassador, he should maintain an assertive position with respect to Israel’s rights in the international community. The UN was then — and certainly still is — an organization that’s not friendly to Israel. It constantly adopts resolutions that are hostile to Israel, and Israel is often singled out for condemnation. So nothing has changed over the years.

The UN’s hostile attitude posed great challenges for Bibi,and the Rebbe was very concerned that he should be a strong ambassador, one who is not afraid to express Israel’s position without feeling the need to be overly diplomatic.

When we finished our discussion, the Rebbe invited us to come and dance with the Torah, and so we went down to the main floor, and we danced, as the Rebbe looked on. It was altogether a very special occasion.

Unfortunately, Prime Minister Shamir didn’t follow the Rebbe’s advice, and withdrew from Lebanon. It was difficult for the Israeli government to do something without coordinating with other countries and without incurring the wrath of other governments, which limited Israel’s ability to act in the way the Rebbe recommended.

Now, I had no doubt that the Rebbe was fully conversant with everything that was happening in the world. He knew politics, and he knew what was happening, so his recommendation was an educated one. Knowing the limitations placed upon Israel by the other countries, he was nevertheless very, very insistent that Israel shouldn’t withdraw.

Word of this meeting got around and, to my amazement, wherever I went in New York, people would stop me and say, “Tell us about your talk with the Rebbe.” For years after that, whenever I came to Crown Heights, I was always asked to talk about the Rebbe. In fact, even now, the Chabad rabbi in my own synagogue where I live near Jerusalem, still asks me about it.

What I tell him is that the Rebbe was probably right. Twenty-five years later, we still don’t have peace, and we are still in a constant cycle of hostilities and threats and violence. I can only imagine that, had Israel taken the advice of the Rebbe, maybe things would have been different. Maybe we would have been in a different tactical or strategic situation which would also have enabled us to be in a better negotiating position. Of course, it’s impossible to know. I can only surmise that the Rebbe had thought out what the implications would be for Israel’s moving into Lebanon, or moving further north into Syria, and what might have happened after that. This is something which we’ll obviously never know — how the situation would be different in Syria today, had Israel acted then in accordance with the Rebbe’s advice.

In closing, I would just like to say that I have been involved in many negotiations with many foreign ministers and prime ministers — whether with Bibi Netanyahu, Ariel Sharon, David Levy, Shlomo Ben-Ami, Tzipi Livni, or Silvan Shalom — as their legal advisor on questions of international law. But my experience with the Rebbe was unique, and it stands out in my memory. And I think Bibi feels the same — in fact, he said to me that this is one event that he remembers well.

After that meeting, I had more confidence in my job at the UN — not to be overly apologetic; to be more assertive. The Rebbe got it across to me that we have no reason to apologize. And, in later years, when I was the Israeli ambassador to Canada and frequently spoke in public, I always said, “We don’t have to apologize for what we’re doing. We too have rights.”

Mr. Alan Baker is an expert in international law and former Israeli ambassador to Canada. He is presently the director of the Institute for Contemporary Affairs at the Jerusalem Center for Public Affairs. He was interviewed in July of 2010.