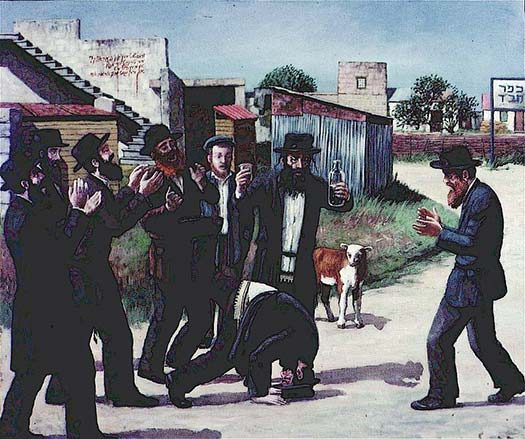 This upcoming Tuesday is Beis Iyar, the 144th birthday of the Rebbe Maharash. It is customary to say his kapital (psalms chapter, at least on the day of his birth) and this year we begin saying capital 145. In honor of this day, I present a segment of my newly released 562 page biography on the Rebbe Maharash, which will be available b’ezras Hashem this coming week..

The following story occurred during the lifetime of his father the Rebbe the Tzemach Tzedek.

A chossid from Vitebsk once came to the Tzemach Tzedek and poured out his heart to him, unable to contain his anguish. “My only son received an order to present himself in front of the conscription office,” he cried. “The Rebbe knows how difficult it is to receive an exemption from the army draft, particularly this year, as they are even drafting young men who are their parents’ only son (although this used to be an automatic exemption). The problem is all that more acute since, Boruch Hashem, my son is strong and healthy, and the doctors will definitely declare him fit for the army. Rebbe, please save him!!”

The Tzemach Tzedek shared in the father’s pain and cried along with him. However, he saw that the son’s fate was sealed in Heaven; it was decreed that he was to be drafted into the Czar’s army. Full of sorrow, the Tzemach Tzedek replied: “I’m sorry, but there’s nothing I can do to help you.”

Leaving the Rebbe’s room, the father broke down in uncontrollable sobs. “The Rebbe’s love for every Jew is beyond measure,” he thought. “If even he can’t help me, it means that my son’s fate is sealed! However, I must still try to do whatever I can to save my only son. Let me ask the Maharash if he can present my request to his father, the Rebbe, a second time.”

The Maharash readily agreed. However, his father replied: “I have already said that there is nothing I can do to help him!” Having no other choice, the Jew made his way home.

The days passed, until it was time for his son to be examined by the government doctors to see if he was fit for army service. Two days before the appointment, the distraught father sent a messenger to the Maharash specifically to beseech him to present his request once again.

Although his father the Rebbe had already stated twice that he was unable to help in this particular case, the Maharash pleaded to his father yet again on the chossid’s behalf. Once again the Tzemach Tzedek said that he couldn’t help the young man, but this time he asked his son to bring a Midrash Tanchuma.

The Maharash brought the desired sefer, and the Tzemach Tzedek turned to the possuk “Im kesef talveh,”[1] where the Torah instructs us to give a helping hand to the needy. He then proceeded to read the Midrash on this verse:

“Hashem says: ‘The pauper’s soul was famished from starvation and he was on the verge of expiring, and you gave him support and revived him. I promise you that I shall reimburse you, a soul for a soul. The day will come when your son or daughter will become ill or approach death. I will remember the deed you performed with the pauper and redeem the child from death.’ ”

Saying this, the Tzemach Tzedek closed the sefer, and the Maharash understood that it was time for him to leave. However, he realized that something out of the ordinary had just transpired, and that the young man would be saved!

Sure enough, a few days later the wonderful news reached Lubavitch that the boy had been spared. Miraculously, the doctors at the conscription office had for some unknown reason declared him completely incompetent to serve in any capacity, as if he was a crippled person, and had sent him home. The Rebbe was elated when he heard the good tidings. Yet the Maharash was intrigued. He had to find out: What act had saved the boy?

Some time later, the Maharash went to Vitebsk for his semi-annual examination with his doctor, Doctor Heibenthal. As always, he utilized every moment to its utmost, so he therefore took the opportunity to visit the chossid at his home. After greeting him warmly and thanking Hashem for His constant kindness, the Maharash asked: “Did you do anything special on that fateful day when your son was examined?”

“Nothing in particular stands out,” the boy’s parents replied. “Of course, we implored Hashem for mercy by davening, saying Tehillim, and visiting the gravesites of our ancestors and begging them to intercede in Heaven on our behalf. Other than that, we don’t recall anything out of the ordinary.”

The Maharash was not satisfied with this reply. “Think over the entire day in detail,” he prodded them.

After giving it some thought, the chossid’s wife said: “Yes, I do remember something that may be worth mentioning.

“That morning, a beggar knocked on our door asking for some food. We were already at the door, preparing to go to the cemetery to beseech our dear departed parents to pray for us, so we asked him to return at a later time. However, the beggar continued pleading with us. ‘I am starving and haven’t eaten in a long time!’ he stated.

“Hearing his anguish and desperation, and since we weren’t in the mood of eating anyway, I gave him a fully prepared meal which he ate gratefully.”

“That’s it!” exclaimed the Maharash. “The zechus of feeding a starving Jew is what saved your son!” He then blessed them to be able to continue helping others and went on his way.

The Maharash had just learned an important lesson. Sometimes a tzaddik does not have the ability to give an individual (or community) a brachah, but he will try to help them anyway. His father had seen and stated that he didn’t have the ability to save the boy through giving him a brachah. Nonetheless, he helped them in a different way: he opened a channel in Heaven, allowing the meritorious actions of the boy’s parents to save their son.[2]

I chose this story as in my understanding, this is one of the most telling ones that demonstrate, that although in many aspects the Tzemach Tzedek’s life and the Rebbe Maharash’s were different, we see from here that The Rebbe the Tzemach Tzedek, himself was showing his son and future successor, that one has to live in a lchatchilla Ariber way.

The Tzemach Tzedek stated not once, not twice, but three times that he can not help this Jew. In essence he was saying that his fate is sealed in Heaven. Yet after stating that, he showed that even when the heavens declare there is a limit, the fact is the limit is not etched in stone, it can be changed. Nothing can withstand the power of Torah and Mitzvos.

And that my friends is the approach of Lchatchilla Ariber, as is explained at length in the introduction to his biography.

Rabbi Avtzon is a veteran mechanech and the author of thirteen books on the Rebbeim and their chassidim. He is available to farbreng in your community or college campus, and can be contacted at avtzonbooks@gmail.com