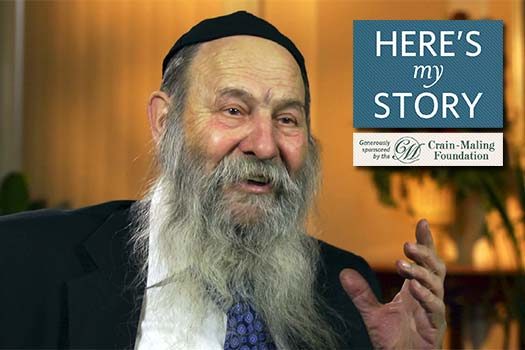 Hirschel Pekkar, a silversmith who resides in Crown Heights, relates a number of stories of his encounters with the Rebbe, one in which his wife was rushed to the hospital over Shabbos, and when it ended he was surprised to find a letter from the Rebbe in which he begins “by the time time this letter reaches you, I hope that anyone in need of G-d’s blessing for improved health will have enjoyed such improvement…”

I was born in 1936 in Ukraine, in the city of Dnepropetrovsk (formerly known as Yekaterinoslav), where the rabbi was Rabbi Levi Yitzchak Schneerson, the Rebbe’s father. Unfortunately, I never got to know him because, when I was only three years old, he was arrested for his activities on behalf of Judaism and was exiled by the Soviets to Kazakhstan, where he passed away five years later.

After World War Two — during which my father, a soldier in the Russian army, was killed — my mother and I escaped to Germany, where we stayed for a time at a displaced persons’ camp near Bergen-Belsen. At age ten I was sent to live with a relative in England and attended the Gateshead and Manchester yeshivahs there.

After I finished my schooling, I became a jeweler, eventually settling in London. Although I was leading the life of a religious Jew, I felt something was missing in my life. When I was 18 years old, I began to study Torah with a Chabad rabbi named Yankel Gurkov who introduced me to chasidic teachings and told me about the Rebbe.

I felt drawn to the Rebbe since his father was the rabbi of my hometown, so I wrote to him, asking for a blessing for three things: proper intelligence, a good livelihood, and the right woman to marry.

Very soon afterwards I got a reply, in which the Rebbe said he would mention me in his prayers and wished me to share good news soon. Sure enough, two weeks later I met my wife. Just two weeks later!

Not long afterwards, in 1962, I came to New York along with a group of Jews from England as part of a trip organized by Mr. Zalmon Jaffe. At that time, I had my first audience with the Rebbe and instantly I felt that this is the connection that I was looking for.

During that audience, I discussed the issue of my livelihood with him. I recall that he asked me “Are you doing piecework or timework?” He encouraged me to take time to improve my skills as a jeweler and pointed out that the only way that I could do that would be if I was doing piecework and was not pressured timewise. Because of his advice, I set up a little workshop in my home and have been working to improve ever since.

Another time that I had the privilege of having an audience with him, he said to me in Yiddish, “Zolst nemen fun danet oif gashmiyus un oif ruchniyus mit zich — You should take with you from here the physical and spiritual [sustenance].”

So I said to the Rebbe, “Ich hub gevolt nemen der Rebbe mit zich — I want to take the Rebbe with me.”

Sometime later, while on a visit to New York, I took a job in Manhattan, for a company that asked me to do jewelry designs. I worked hard on this, but after a while, I felt that I was beginning to work too hard for money. So, at my next meeting with the Rebbe, I decided to give it all to him. When I did, the Rebbe smiled, and then he peeled off a one hundred-dollar bill from what I gave him and said, “Since this money is mine to do with it whatever I like, I want you to take it and spend it as follows … It’s customary for you to bring back a present for your wife, so buy it with this. And with the change, buy Jewish books for your children.”

But the two most dramatic stories I have to tell about the Rebbe have to do with my wife.

There came a time in 1962, when she developed terrible pains in her abdomen. She went to the hospital and they told her that she has gallstones, which were quite apparent on the x-rays.

Her doctor advised surgery and even said, “If anybody tells you otherwise, he’s a quack.” So she believed him and the date for the operation was set.

Of course, she was very nervous about it, and she wrote to the Rebbe asking for a blessing, but no answer came.

As it happened, the kosher hospitality place — where our children were to stay while she was undergoing the surgery and recovering from it — was full at that time, so she had to postpone the operation. And that is exactly when we received a letter from the Rebbe, which said:

“Inasmuch as there is in any case a waiting period before the suggested operation, it would be advisable to make use of this time to try out a diet to see if it may make an operation unnecessary. After trying out a diet, it would be well to consult the specialists again and perhaps they may change their mind about the need of an operation for I know of many cases where a prescribed diet has been effective this way.”

Of course, my wife tried this diet which consisted of fruit and fruit juices, and her problem went away. So, she never re-scheduled the surgery.

Sometime later, she had a problem with her feet, and while she was being examined, she mentioned that she had had a previous issue with gallstones. So the doctor took an x-ray but found nothing there. “Who told you that you had gallstones?” he exclaimed. The simple advice from the Rebbe cured her completely.

But then, in 1965, my wife became sick again. A doctor made a house call and immediately called for an ambulance to transport her to the hospital where she stayed through Shabbat, during which time she experienced improvement and was released immediately after.

I myself stayed with friends that Shabbat and, when I came home, I found a letter from the Rebbe waiting for me. I had not called the Rebbe to ask for a blessing for my wife’s recovery, which is why this letter took me by surprise, especially since it said:

“By the time this letter reaches you, I hope that anyone in need of G-d’s blessing for improved health will have enjoyed such improvement. In such a case, it is necessary to do all that is required in the natural order of things, under the guidance and care of a doctor, which provides the channel to receive G-d’s blessing, as it is written, [in the Book of Deuteronomy 15:10], ‘And G-d will bless you in all that you do.’”

And that same time I learned that my wife was better and coming home. But what I couldn’t get over was that the Rebbe’s letter was mailed out from New York even before she had become sick. In fact, it was dated twenty-five days earlier. How could the Rebbe have known?

Mr. Hirschel Pekkar works as a silversmith in Brooklyn, New York, where he was interviewed in 2012.