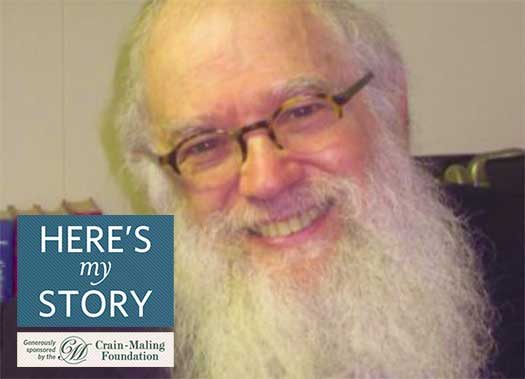 As a student in the University of Rochester, Dr. Levi Reiter once confronted Shliach Rabbi Nosson Gurary following a speech. After the encounter he found himself growing closer to Chabad and started putting on Tefillin, a few days later he felt paralized in his left arm and the Rebbes advice left him in a unique position.

I grew up in a traditional Jewish family in Brooklyn. We were not Orthodox, although we kept much of the Torah. But, when I left home, I began to lead a secular life.

That changed in 1973 when I found myself at the University of Rochester, going for a doctorate in experimental psychology; that is where I encountered Chabad – specifically in the person of Rabbi Nosson Gurary. He came to give a speech at the university, and afterwards I confronted him about certain concepts in Judaism that I felt were very medieval and unscientific. I actually felt bad about doing this, because I thought that when I presented him with the facts, I would make him doubt his faith. But he turned the tables on me – he demonstrated to me that he knew more about these scientific topics than I did.

When I investigated what he said, I found out that he was completely right. And I also found out where he got all that sophisticated scientific knowledge from – the Rebbe.

To make a long story short, my wife and I became close to the Gurarys and the Greenbergs who were the Chabad emissaries in Buffalo, and they brought us along in Yiddishkeit. At some point in 1975, I decided – with Rabbi Gurary’s encouragement – to start putting on tefillin. Although I didn’t have much money as a graduate student, I ordered a beautiful pair and put them on. Two days after I did so, I woke up in the middle of the night to find that my left arm was paralyzed – it felt like a dead fish; I couldn’t move it.

I thought that I had slept with my weight on it and, as the day wore on, it would return to normal, but it didn’t. So, I consulted a neurologist who told me that, if I had pressed on the nerve for too long, it’s possible that it died and would not regenerate itself, or it might regenerate itself, but it would probably take as long as a year before I would regain the use of my arm. The best scenario was that it was not nerve damage but just internal swelling. He recommended wearing a sling for about a week to see what would happen. But a week passed and there was no improvement.

Meanwhile my sister Leah, who at this time was a student at the Machon Chana seminary in Crown Heights, decided to write to the Rebbe about my condition. In her letter she related the three possible outcomes that the neurologist had identified, and she got back a response in which the Rebbe had crossed out the possibility that it would never get better or that it might get better in a year’s time, and he circled “it’s going to get better very quickly.” The Rebbe also advised checking my tefillin.

The other thing that happened while I was at the University of Rochester is that I discovered a new test for deafness. It happened totally thanks to Divine Providence, since I was not looking for it. As part of my studies in experimental psychology, I was looking at simple reflexes and how they respond to various stimuli; in this experiment I was working with a group of white rats, some of which had upper respiratory infections, and I needed to separate those which had middle ear infections from those which didn’t. But in order to do that I had to be able to tell which rats could hear and which couldn’t. In this quest, I designed an apparatus that would also work on a human being who was not aware of being tested.

I was very excited about this and informed the Rebbe, who gave me a lot of encouragement. After I wrote my Ph.D. thesis on this subject, I went to do post-graduate work at the University of Kansas Medical Center, again with the Rebbe’s blessing and encouragement.

Although I was an experimental psychologist, in Kansas I was actually working in audiology. So, my mentor at the university, Dr. Cornelius Goetzinger, suggested that I get a formal degree in audiology. In truth, I loved audiology but I was not so keen on returning to school, as I had just completed a lengthy Ph.D. program. As well, I had become involved in the Chabad work in Rochester and was considering becoming a Chabad emissary. However, when I consulted the Rebbe, he strongly encouraged me to get the degree. In fact, he said, “Get deeply involved in audiology.” So this is what I did.

After three years in Kansas City, the Rebbe gave his blessing for us to return to Crown Heights, where we would be able to better educate our kids. This was in 1980. At that time, I had been offered a professorial position at Hofstra University, where I subsequently taught for thirty-three years. A couple of years after I arrived, the Rebbe sent me a very interesting case to research. The husband of a woman who was suffering from a terrible noise in her ears had come to the Rebbe for advice and he recommended that I look into the matter. The woman’s condition is known as tinnitus and it is often just a ringing in the ears, but she described it as having a jet plane in each ear. Because of this, she could not function.

I researched the issue thoroughly and wrote a ten-page paper for the Rebbe, outlining all the latest treatments for this problem and ranking them in terms of severity of side effects. A short while later, I got the paper back with all kinds of notes from the Rebbe on the margins.

The Rebbe wanted this woman to pursue the treatment which had the most serious side-effects including liver suppression, double-vision, head-to-toe rashes, etc. I was surprised, but I found a place in the Midwest which could treat her and which was near this woman’s home. And, right after the first injection, her tinnitus disappeared. But then she started getting some very bad side effects from the follow-up oral medication, so she could not continue.

Yet the tinnitus began to fade into the background. I have been in touch with her over the years, and she is still doing well. She completely got rid of this terrible problem, which for most people is a chronic condition. There is no standard cure for it. But she was cured, and I attribute that to the Rebbe’s advice and blessing.

Dr. Levi Reiter is a professor emeritus of audiology at Hofstra University. He also has a private practice in audiology in Crown Heights, New York, where he was interviewed in 2013.