« Shliach Dances with Students after Campus BDS Motion Fails
Picture of the Day: A Friday Wedding » 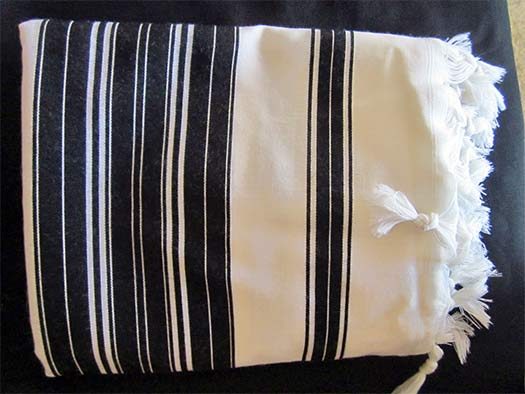 In honor of the engagement of our daughter Devorah Leah to Shlomie Schwei, I am presenting the following thought and story.

The custom is that the kallah presents her chosson with a tallis. When we don the tallis we recite four passages from Tehillim (Psalms) chapter 36, and the final passage is; “Bestow Your kindness upon those who know You, and [bring out] Your righteousness to those with an upright heart.”

The commentaries explain that in essence we are requesting from Hashem two different things, kindness is for those who know You, while those who are upright only receive Your righteousness. The question then is; what is the difference between those who know Hashem and those who serve Him with an upright heart.

Let us explain this through a allegory. An associate asks you if you can take him to the airport to catch his flight. Being that you are friendly with him, you reply, “Sure, what time is the flight?”

Now if the flight is between 7 pm and 9 pm, you have no problem, you are happy to assist him. However, if the flight is at 5 am, which means you have to wake up at three in the morning, your happiness and enthusiasm is gone and you may even back out without anyone saying that is wrong of you. After all, is it expected of one to give up their nights sleep for an acquaintance?! Furthermore you may feel that you were tricked and your associates request is unjust etc.

However, if the one who is requesting this of you is one whom you dearly love, than even though it is at that unheard of hour, you will do it with gusto. After all, this person is extremely dear to you. So not only will you do it gladly, but if someone will mention that you were taken advantage of, or that what you did was really something special, you will look at them with an expression as if to say, what are your talking about?

And that is what we are saying when we wrap ourselves in the tallis; [Hashem] bestow Your kindness to those who know You, as their relationship to You, is as the relationship of dear friends. So then, for such a friend one does favors that they perhaps are not necessarily deserving, but it is done anyways as it is for my friend.  However, if your relationship to Hashem is only according to the book, meaning I do what Shulchan Aruch prescribes and if the law says I am exempted from fulfilling the mitzvah because of a difficult situation, so then I don’t do it; the possuk informs us, since you are following the book, Hashem too will follow the book and give you what righteousness demands,  since that is what you earned, but not more.

Our brocha to Devorah Leah and Shlomie is, continue to serve Hashem in the manner of  bff and may He shower His kindness on you, and fulfill all of your heartfelt desires, with healthy and blessed children, longevity and ample livelihood.

With this introduction one will appreciate the following story (as that is the manner of this column). It is one that I heard from my father, Reb Meir Avtzon a”h and which he wrote in his sefer Oros Ba’afeilah, pp. 139–140.

In 5689 (1929) Reb Itche HaMasmid, visited Kremenchuk for an extended period of time and he requested of me that I[1] kasher an oven for him, in which he would bake matzos. For the kashering process, he wanted the oven’s heat to be raised to a higher temperature and for a longer amount of time than is required by halachah.[2] As such, many of the local baalei batim did not allow me to use their ovens. They simply were afraid their house might catch fire due to the intensity of the heat.

Finally, I found an individual who let me to use his oven for this purpose. He was not a Lubavitcher, and if I remember correctly his name was Reb Yaakov Silberman.

After the oven was koshered as he stipulated, Reb Itche said he wanted to smear the oven’s inner walls with a layer of clay a tefach (3-4 inches) thick, which will require that the oven be heated again, in order that the new layer sticks it to the walls properly.

“The clay covering will not withstand the heat unless it is mixed with an animal’s excrement,” Reb Yaakov’s wife informed him.

“If that is the case,” Reb Itche replied, “that is what we will do.”

After smearing the new covering onto the oven walls, we kashered it once again by reheating it to an extremely high temperature. When it cooled down the floor of the oven was swept up, and we found in the ashes something that looked like a broken, burnt kernel of wheat. Apparently, it had been eaten by the animal whose excrement we used to mix with the clay.

Noticing this, Reb Itche instructed me to kasher the oven once again. When Reb Yaakov’s wife heard this, she told us: “Since the kernel was found in the animal’s excrement, it no longer has the din of chometz. This is especially so in our case where the kernel is broken, which demonstrates that it had already been eaten and digested.” She was thus implying that there was no need to re-kasher the oven a third time.

Reb Itche was extremely bothered by this. Painfully, he said to me, “Oy Meir! A learned person is a big problem.” [In other words, it is problematic if someone follows the written halachah but does not appreciate its inner spirit.]

Seeing his pain and aggravation written all over his face, they said, “If you want to kasher the oven anyway, we won’t stop you.” He was extremely grateful to them and instructed me to do so.

Now according to the letter of the law, they were correct, being that it was eaten and digested and then burnt to a crisp, these points are more than sufficient reasons to declare that former kernel as non-chometz. But, Reb Itche went beyond the letter of the law, so too him if it smelled of Chometz, it was treated as if it was actual “chometz” and he koshered it again.

So just as each family has its unique hiddurim and chumros (stringencies) especially when it comes for Pesach that go beyond the letter of the law, so too Hashem should bestow upon His entire nation His everlasting kindness, and grant all of us our heartfelt desires, with the ultimate kindness of redeeming us from this final golus with the coming of Moshiach tzidkeinu, and we will eat this year the korbon Pesach in Yeushalayim, with the building of the 3rd Beis hamikdash.

Rabbi Avtzon is a veteran mechanech and the author of numerous books on the Rebbeim and their chassidim. He is available to farbreng in your community and can be reached at avtzonbooks@gmail.com

[1] At that time my father served as the mashgiach of the underground yeshiva Tomchei Tmimim there.

[2] According to the halachah, as soon as the walls of the oven become red, it is considered koshered. However, Reb Itche was insistent that the fire continues burning for a period of time after that.

« Shliach Dances with Students after Campus BDS Motion Fails
Picture of the Day: A Friday Wedding »