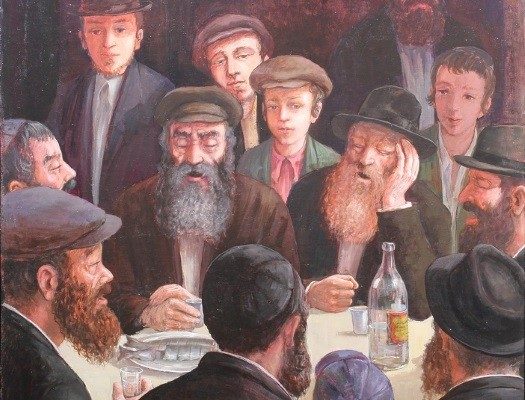 This Shabbos, although we don’t bentch the chodesh, (as explained by the Baal Shem tov, See Hayom Yom for Shabbos), it  is still considered Shabbos mevorchim, as demonstrated by the fact that we say the entire Tehillim before davening, as well as by participating in a Shabbos Mevorchim farbrengen that follows davening.

The purpose of a farbrengen is to inspire the participants to improve in some aspect. This applies even if the participants have already accomplished a tremendous amount for Judaism. As good as today was, tomorrow has to be better. This is the purpose of any farbrengen, but especially so by one that is right before Rosh Hashanah, when everyone makes a resolution for the new year.

The following story was publicized two weeks ago. And the point is how a successful individual was so inspired by a farbrengen, that it changed his life. Not that I agree with everything he writes or promotes, but this article does bring out the power of a farbrengen.

This Shabbat, the Eleventh of Elul, marks 47 years to the day of one of the most transformative moments in my life, in the most unlikely of places and circumstances. It was on this date in September 1970 that I was in the synagogue of Riga, Latvia, in the former Soviet Union, carrying out a mission personally requested of me by the Lubavitcher Rebbe, of blessed memory, to establish four underground yeshivas.

These yeshivas were to be established under the radar of a regime that had made every aspect of Jewish life forbidden. Owning a Hebrew primer was punishable by exile to Siberia. Thank G-d, I had succeeded in Moscow and Leningrad, but when I left my hotel in Riga that Shabbat morning I noticed that I was being followed by four very tall and burly individuals who barely gave me breathing space.

These KGB agents literally surrounded me in the sanctuary where I was seated in splendid isolation in the extreme corner of the right side. The other twenty-eight congregants, each clearly over the age of sixty-five, were sitting together on the extreme left side of a large sanctuary built for six-hundred.

The cantor and choir chanted the service as if they were performing before thousands. The gabbai, a short man with white, wispy hair, whispered to me in Yiddish, “We are thirsty for Torah. We have a Kiddush after the service downstairs. We expect you to teach us. Please come down after the davening – but without your friends.”

The interminable service ended at exactly Noon. The four goons miraculously disappeared, and I went down into a pitch black room where fifteen people were seated around a table. The table was set with many bottles of clear white liquid and slices of honey cake. A chair of honor was set for me with a large Kiddush cup.

At that point, I asked the Torah reader from the synagogue, Yisrael Friedman, a Chabadnik, to give a D’var Torah, and his words literally changed my life.

He related that Elisha ben Avuya was a great rabbi of the Mishna who became a heretic upon witnessing the tragedy of a boy who had climbed a tree to bring down a pigeon for his father after sending away the mother bird. In doing so, the child had performed two commandments that promise the reward of long life, yet he had fallen from the tree and died. “There is no judge and no judgment!” was Rabbi Elisha’s defiant reaction [Babylonian Talmud, Kiddushin 39b].

Elisha’s grandson, Rabbi Yaakov, noted that had his grandfather understood a major axiom of Jewish thought he would never have left the Jewish fold: “There is no reward for the commandments in this world” [ibid.].

Yisrael looked out at the basement assemblage with blazing eyes and then looked Heavenward. “But G-d, that’s not fair! How can You expect Your Jewish servants to pay the day laborer on that very day when you withhold our reward for the commandments till after our lifetime, in the world to come?!”

Whether we have fulfilled most of our mission or just a little of it can only be determined at the end of our lifetimes. For us contractors, there is no reward for commandments in this world.

I was moved to tears. After witnessing first-hand the persecution of Soviet Jewry, I was overwhelmed by thinking of G-d’s great gift of a newborn State of Israel, and felt deeply in my heart that I could not possibly have been born in a free country in these most momentous times in order to fulfill my mission in New York.

And so in the basement of Riga I made an oath: I will bring my family to the State of Israel and hopefully there realize my true calling. And when I get to Israel I will make Kiddush on vodka every Shabbat day in memory of this experience. I am thankful to G-d to report that I indeed arrived with my family in Israel, and to this day, 47 years later, I still make the Shabbat day Kiddush using vodka, forever reminding me of that moment, and the lesson I learned from a refusenik in Riga.

Chassidic Lesson: Look what a chassidic gathering accomplished – that Rabbi Riskin should make kiddush every shabbos day on vodka!

I kept the Chassidic lesson that the special person who shared this with me noted, (while to me the lesson is simply that he was moved to do something because of the farbrengen).

At the same time, I take the opportunity to wish all of our readers amongst the entire Jewish nation, a Kesiva v’chasima tova, L’ Shana Tova Umesuka, and may we all merit our individual geulah as a prelude to the ultimate geulah with Moshiach tzidkeinu, speedily in our days.

Rabbi Avtzon is a veteran mechanech and the author of numerous books. He is available to farbreng in your community and can be contacted at avtzonbooks@gmail.com.