« Video: Why Did Your Soul Come into This world?
Ancient Meets Cutting Edge at GoSofer.com (ad) » 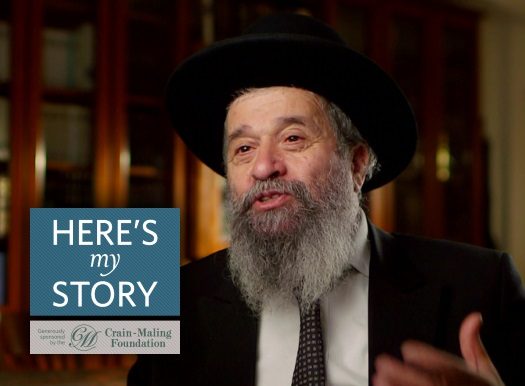 Rabbi Moshe Tzur, an Israeli Air Force veteran, now lives with his family in Jerusalem, Israel. After his service in the Air Force, he went on to found a number of yeshivot and other non-profit organizations. He was interviewed by JEM’s My Encounter with the Rebbe project in December of 2015.

In 1969, when I was serving in the Israeli Air Force – during the hard times in the aftermath of the Six Day War, when soldiers did not have much good to eat – I remember a jeep pulling up and someone handing me a package. A note on the package said, “Purim Samayach mehaRebbe miLubavitch – Happy Purim from the Lubavitcher Rebbe.”

I remember wondering, as did every soldier who got the same package, “Who is this Rebbe of Lubavitch? Why does he care so much about us to deliver sweets to us in the middle of the desert?” I must say I was touched and impressed.

In 1971, I was sent to the Suez Canal to bring back wounded soldiers to the hospital in the north. I did this day after day, and it was really very difficult to see so many gravely wounded. One day, my convoy came across two Chabad people who asked us to put teffilin on. I did, and when I recited the Shema prayer – “Hear O Israel, the L-rd is our G-d, the L-rd is one” – I became very emotional and started crying. From that moment began my journey of return to Judaism and coming back to G-d.

When I finished my military service, I came to New York, where I met a very nice guy from Chabad named Shraga Zalmanov, who introduced me to the Rebbe. This was in 1977. I visited with the Rebbe a few times, and on one occasion I gave him a book of mystical teachings authored by a grandfather of my cousin, HaRav Yehudah Fatiya, who wrote a famous commentary on the 16thcentury Kabbalistic masterpiece, the Sefer Etz Chayim. The Rebbe responded with a beautiful letter thanking me for this book and also for another book by HaRav Eliezer Papa, better known as the Pele Yoetz, which I had published in the memory of my father.

In one of my meetings with the Rebbe, he asked me what I was doing for the Jewish community. And he spoke to me about the commandment to love your neighbor as yourself. He said, “Why is the heart of the human being on the left side? Everything good in Judaism is on the right side, the side which represents kindness. We put on tefillin with the right hand, we shake hands with the right hand, we hold the Torah scroll on our right side etc., so why is the heart on the left?”

And then he told me the answer: “Because when you face another Jew, your heart is opposite his right side and his right hand. For your heart beats not for you but for the other, for the fellow whom you must love as yourself.”

I understood then that the message of “v’ahavta l’rayacha kamocha – love your neighbor as yourself” is to make your heart beat for others, make your life centered on the needs of others. When you do that, then your heart is on the right side.

This message really spoke to me, and I adopted it as the center of my philosophy of life. And, since then, my mission in life has been to reach the heart of every Jew that I meet.

After succeeding in business in Chicago, I returned to Israel, and I established two important yeshivot. One yeshiva is called Aish HaTalmud; it is a yeshiva high school with almost two hundred boys enrolled.  The other is called Torat Moshe, with about ninety-five boys. I have also established four kollelim, study groups for married men, with almost a hundred-twenty enrolled.

In addition, I founded an organization to support poor families for Rosh Hashanah and Passover. These are people who don’t have much income, and we help them with food and money.

All this because of the words of the Rebbe – that the key is to help others – which changed my perspective on life and shaped my life’s mission.

There is one more personal episode involving the Rebbe that I would like to relate.

This occurred in the 1990s, when I was visiting the United States together with my wife, who was pregnant at that time. We came to see the Rebbe when he was handing out dollars for charity, and he gave us the customary blessing. But, as we were walking away, he called my wife back and gave her an additional two dollars.

We did not know why, until a few weeks later, when my wife had an ultra-sound and we found out that she was pregnant with twins. So, we realized that the Rebbe had been giving us a hint.

They were born in the Hebrew month of Elul, and their circumcision was on the 25th of that month, the day on which we celebrate the birth of the world. They were named Mordechai Eliyahu and Yosef Chaim. This was a big event for us and we felt a special connection to that special blessing of the Rebbe.

The day that the Rebbe passed away, I was in Los Angeles and I tried very hard to get a ticket to fly to New York for the funeral, but I did not succeed; I arrived a day later.

It was a Sunday, as I recall, and it was a difficult day. I just couldn’t adjust to the idea that the Rebbe was no longer with us. I felt such a terrible sense of loss.

My comfort is that his teachings live with us and through us, and I hope I have done my part to put into action the Torah’s mandate to “love your neighbor as yourself” as the Rebbe taught me.

« Video: Why Did Your Soul Come into This world?
Ancient Meets Cutting Edge at GoSofer.com (ad) »