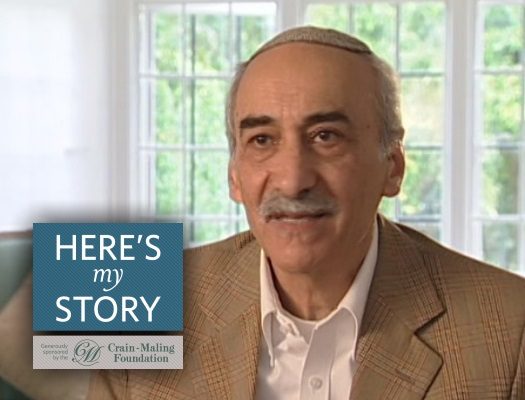 Mr. Raphael Nouril, a classical artist, currently lives in London, England. He has produced many paintings depicting religious and political figures, as well as all aspects of Jewish family life. He was interviewed by JEM’s My Encounter with the Rebbe project in his home in August of 2007.

I was born in 1940 in Tabriz, Iran, where I was educated as an artist in the classical style by Reza Samimi, the royal portraitist of Persia in 1954. At a time when modern art was dominating Europe and America, you could still find artists in Iran from the old school, teaching in the classical manner.

I traveled to France for a time and visited the École des Beaux-Arts in Paris to show them my work. They responded very positively but didn’t specialize in my area. But despite their inability to help me, they suggested that I check out the museums of Classical Art to better train myself in the works of the old masters.

I immigrated to London, where I continued to practice my art but did not practice any Judaism. I considered myself secular until 1983 when everything changed for me.

About that time, my wife and I were living in London, next to a Lubavitch family – the Rutmans. When I visited their home, I saw a photo of the Rebbe hanging on the wall, and I was inspired to paint his portrait. It was a difficult decision, because I needed to relate to him. When I paint someone, I don’t just portray their resemblance; I need to convey their character and feelings.

Although I had previously painted many well-known personalities, including the Shah of Iran, I had never painted a holy man before. I always approached my subjects by trying to get to know them, but how could I get to know a holy man?

I felt distant on a number of levels. In addition to being thousands of miles away from the Rebbe physically, as a secular person, I didn’t feel like I could relate to him on a personal level either. I had to remedy this by becoming closer, both physically as well as spiritually.

To begin with, because the Rebbe was in New York and I was in London, I started watching videos of him, and borrowed some photographs from Mr Gedalya Rutman, my neighbor. But that was not enough. In my quest to get closer to him, I began to pray, to put on tefillin and even to keep Shabbat and the holidays.

After two months of living an observant life, I felt I was ready to begin painting the Rebbe. When painting in the past, I would often sketch and erase the outline many times before being satisfied; I’d rub out what I had done and start all over – sometimes two or three times. But in this case, I never rubbed out anything – not even once! I felt as if a force was conducting my hand to the destination of every single line. I began with the Rebbe’s eyes, painting them on blank canvas and then, with his eyes looking at me, I moved forward to paint the face and the rest.

When I nearly finished the painting, I traveled with Gedalya Rutman and my family to see and speak to the Rebbe and complete the final touches of the painting. However, in 1984, the Rebbe was no longer granting private audiences and, when I arrived at Chabad Headquarters, I was told to leave the painting with his secretary and that it would be shown to the Rebbe later.

This I could not do because I had come all the way to meet the Rebbe in person. So, instead, I waited outside, the portrait covered with a cloth, hoping to unveil it when the Rebbe arrived in the morning.  As the Rebbe exited his car, my wife took the cloth off the portrait, and the Rebbe was immediately drawn to it.

I had planned to ask his opinion but, without any prompting, the Rebbe said, “The hands like this are prohibited … they should be like this.” And he put his right hand over his left to demonstrate. I had painted the Rebbe’s handed with his fingers intertwined with one another, something that I later found out is problematic.. I asked the Rebbe to comment on the face and then he looked at the face and replied, “Very good” – he said three times. And then he added, with a smile on his face, “Better than the original.”

When I returned home, I erased the portion of the hands using a special acid, and started to paint the hands all over again. When I was done, I sent a photo to the Rebbe’s office and then printed 358 limited edition lithographs of the original. The reason I printed 358 is because that is the numerical value of the word Mashiach, a topic the Rebbe was so passionate about. I numbered and signed each of them and gave the final one to the Rebbe.

This whole experience brought me closer to the Lubavitch community in London. In the process, I learned more about the Rebbe, especially that he was very tightly connected to his father-in-law, the Previous Rebbe. So, I decided to paint them together.

After a long search, I found a very small, very faded photograph – which you had to view with a magnifying glass – of the two of them together. This photograph was taken shortly after the Rebbe’s marriage to the Previous Rebbe’s daughter. He was very young in that photo and the Previous Rebbe was holding his hand in a touching way. I decided to reproduce this photo as a life-size painting.

It took me a year to finish it, and I brought it to New York to show to the Rebbe in 1988, the year his wife passed away. When I unveiled it for him, he was clearly very thrilled with it. “Spasiba,” he said, which is Russian for “Thank you,” and then he switched to English, saying, “Thank you very much for showing it to me. This painting should be a good start for you to double your efforts and spread Judaism through your works of art, together with your wife.”

Then he gave me and my family many blessings for success and several dollars to pass on to charity. As I was walking away, he called me back and raised his hands upwards, saying, “Don’t forget about growing … up, up up!”

From that moment, unusual things started happening with my paintings. They became vehicles for many people returning to Judaism, which just goes to show how a blessing of a holy man can influence the world.

From among many examples, this is just one story I would like to relate:

One day I happened to be in Florida, and I stopped at a gallery in Bal Harbour. I began talking with the owner, an old man. He was Jewish but refused to have anything to do with Judaism since suffering terrible tragedies in his family. Then I pulled out my portfolio, and he was immediately taken by my portrait of the Rebbe. So much so, that he bought a lithograph from me and put it in the window of his gallery.

I had occasion to check up on him some time after and learned that he had spent five-hundred dollars framing the portrait and that he refused to sell it. Because he had it in his gallery window, Chabad boys started coming around and helping him put on tefillin. He had become religious at seventy-five!

When I heard that, I remembered what the Rebbe said to me, “Spread Judaism with your works of art,” and, because of his blessing, it happened – it automatically happened!