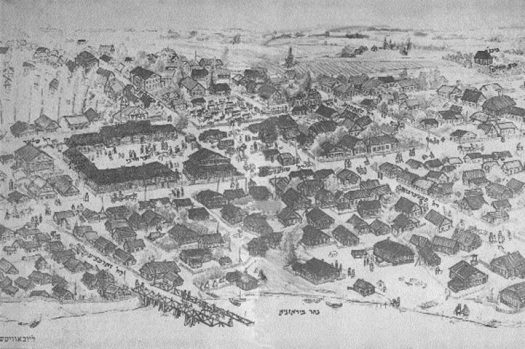 The town of Lubavitch, where the Rebbe Maharash was born and passed away.

Being that the fourth volume in the Rebbeim Biography Series – a 480 page book on the Rebbe Maharash – is being prepared for print, (it needs one final editing review etc.), I decided to excerpt a chapter for this weeks, Weekly Story. I chose this chapter as it is something the Rebbe Maharash said in the month of Av as well during Tishrei, so I thought it would be appropriate for this week, as it is Shabbos Mevorchim Elul.

What Is Appropriate for a Chossid

As noted, the Rebbe Maharash went to numerous doctors and one of the doctors who attended to the Rebbe Maharash was the famed Professor Bertenson. Although he lived in the capital of Petersburg, he had a summer villa which was located in Vitebsk. Every summer, when he would be in Vitebsk, he would make a short trip to Lubavitch to examine the Rebbe. Then, towards the end of the summer, the Rebbe would travel to Vitebsk for a follow-up exam.

In the summer of 5634 (1874), the Rebbe Maharash went to Vitebsk for his yearly checkup, remaining there for five days.[1] On Wednesday, the fifteenth of Av, a large group of chassidim gathered in the courtyard where the Rebbe was staying. Some of them went to a nearby shul, borrowed the bimah, and set it up in the courtyard, hoping that the Rebbe would speak. Seeing the prepared bimah, the Jews who were passing by presumed it had been arranged for the Rebbe to speak, so they remained there as well. In a short time, the spacious courtyard was full to capacity.

A group of elder chassidim, accompanied by the leaders of the community, entered the Rebbe’s residence and asked him: “In honor of all the people gathered outside, hoping the Rebbe will address them on this auspicious day of the fifteenth of Av,[2] would the Rebbe please come out and speak before the assembled?”

“Due to health considerations, it is difficult for me to say a maamar at this time,” the Rebbe replied. “However, in honor of the assembled I will say something brief.”

A few minutes later, the Rebbe exited the house and ascended the bimah. Sitting on the chair that had been prepared for him, he said:

“There is a level of love a Jew has for Hashem which is known as ahavas olam.[3] The Alter Rebbe teaches us that this means that a Jew can attain a love of Hashem by looking at the world around him, as it was created through Hashem’s wisdom. We see from this that we can and should learn lessons in our service of Hashem from the conduct of the world,[4] including from expressions people use.[5]

“There is an expression people often use, ‘This is appropriate’ or ‘This is not appropriate.’ Appropriateness doesn’t only apply to one’s actions; it also applies to one’s speech, thoughts, feelings, and understanding.

“For certain people, it may be appropriate to speak in a certain manner and to fail to understand certain ideas, while for others it would be inappropriate to speak in that fashion and to fail to grasp those concepts. For example, our Sages tell us that a scholar should speak calmly, and he is expected to understand certain concepts that others may be unable to comprehend.

The Rebbe proceeded to list a number of behaviors that are appropriate for a chossid:

The Rebbe then continued to list certain behaviors that are inappropriate for a chossid:

He then stood up, blessed the assembled, and returned to his lodgings.

“I heard a review of the holy words of my grandfather, the Rebbe [Maharash], from the chossid Reb Shmuel Brin,[7] who exclaimed: ‘With these words, the Rebbe elevated us all to the spirit of Yom Kippur!’[8]

“The chossid Reb DovBer Hershman who was also was present at that sicha expressed it to me as follows: ‘During those twenty minutes when the Rebbe spoke, he washed and cleansed [our souls]. If only we would be on that level after saying al cheit during Minchah of Erev Yom Kippur. We then understood what a Rebbe is; he can touch the soul of every person!’ ”

“This Reb DovBer Hershman was a wealthy person. He owned buildings and remained focused on his work and success, and he wasn’t fazed by anything. If, despite his tough, unemotional character, the Rebbe’s words affected him to such an extent, one can only imagine how deeply they affected the others who were present!”[9]

A few years later, during a Simchas Beis Hasho’eivah farbrengen held on Chol Hamo’ed Sukkos, the Rebbe Maharash touched upon this topic once again, saying the following:

“It is inappropriate for a chossid not to learn a chapter of Tanya every day.

“It is inappropriate for a chossid not to be immersed in correcting his character traits. This doesn’t only refer to the removal of one’s negative traits; it is equally inappropriate not to strive to elevate and improve one’s positive traits.

“It is inappropriate for a chossid not to work on his davening. This doesn’t mean that he should make motions or clap his hands while davening. Rather, his focus should be on the connection to Hashem that is accomplished through davening. As an automatic result, in the middle of davening he will hum a Chabad niggun with the deep desire to feel and appreciate G-dliness.

“It is inappropriate for a chossid to be completely involved in business, especially to the point that he [momentarily] forgets that it is the blessing of Hashem that makes him successful.

“It is inappropriate for a chossid not to work on the avodah of saying krias shema before going to bed, and to go to sleep with all the ‘dust’ and ‘mud’ accumulated [through his thoughts and actions] over the course of the day. [Unless he removes this through proper avodah when saying krias shema al hamitah,] his dreams will reflect this negative accumulation.”

The Rebbe Maharash concluded the farbrengen by saying:

“One of the customs the Alter Rebbe instilled among chassidim is that all chassidim should farbreng together. Everyone, whether rich or poor in either the spiritual or material sense, participates in the farbrengen as one. The merit of the community along with the merit and brachos of the Alter Rebbe will surely help every chossid.”

P.S. If anyone is able to help sponsor the publication of this book, it would be greatly appreciated. I can be contacted via email. Thank you

Rabbi Avtzon is a veteran mechanech and the author of numerous books. He is available to farbreng in your community and can be contacted at avtzonbooks@gmail.com.

[1] Author’s note: In all probability he lodged in his daughter HaRabbonis Devorah Leah Ginsberg’s house. However, it is known that he also bought the house in Vitebsk that the Mitteler Rebbe resided in during his arrest and interrogation, so it is possible that he resided there during this extended visit.

[2] See the Mishnah at the end of Taanis: “There were no Yomim Tovim among the Jewish nation like the fifteenth of Av and Yom Kippur.”

[3] Taken from the opening words of the brachah said before Shema during Maariv (and, according to our nusach, also during Shacharis).

Then there is a higher level of love called Ahavah Rabba, which is….

[4] The Rebbe Maharash noted then that our Sages often bring parables from a king, prince, and the like. This clearly demonstrates that we are to learn from our surroundings.

Author’s note: In fact one of the basic tenets of Chassidus is that “From my flesh I can observe G-dliness” (Iyov).

[5] Author’s note: The Rebbe mentioned this concept during the first farbrengen after accepting the nesi’us (on Yud Shevat 5711/1951), quoting the saying of Chazal (Shemos Rabbah, 47:5), “When a person enters a city, he should follow its customs.”

“In America,” continued the Rebbe, “the custom is that a new administration states its mission. So I will do the same and state as follows: Don’t rely on me to do the work in your place. You must continue to do the work [demanded from you]. Yes, I will assist you, but you are the ones who must accomplish the task.

[6] As we say at the conclusion of shemonei esreh and my heart shall be like dust before all.

[7] As noted earlier in this book, he was appointed by the Rebbe the Tzemach Tzedek to be the personal secretary of the [Rebbe] Maharash. Also see later in the story A Tale of Two Chassidim some additional aspects of his greatness.

[8] Indeed, the Mishnah compares the fifteenth of Av (the day this sichah was said) to Yom Kippur (see above, fn. 211).