« ‘The Rosh’ Opens Up at Historic Live Event
Video: Are You One with Your Judaism? » 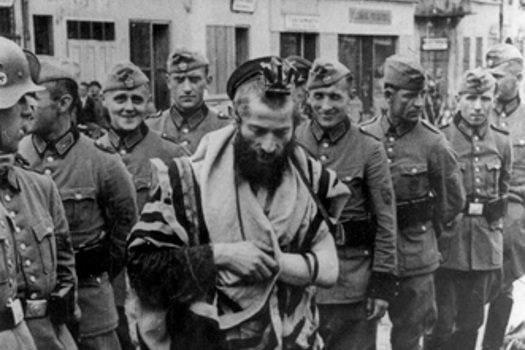 We present a collection of stories renowned author Bentzion Elisha recently heard by a Farbrengen with Rabbi Nachman Twersky, which he wrote up with the intention of sharing them with the community.

A Question of Identity

I spotted a group of young Israeli youth who belonged to a certain anti-religious movement on a plane one time.

I figured this was an opportune time to merit them with the Mitzvah of putting on Tefilin, so I approached them. Instead of appreciation to perform a Mitzvah I got laughed at and instead of rolled up sleeves I got lots of cold shoulders.

“If our group leader puts on Tefilin, we will all put on Tefilin.” One boy stated pointing at the head of the group.

I went to him, Tefilin in hand, and asked him if would like to put on Tefilin.  He just mocked whatever I said while putting down ‘this archaic Mitzvah’ and jeered me away.

Although I did try, I was unsuccessful so I returned to my seat, defeated.

Behind me was a woman of another Chasidic sect.

“Can I speak with the boys?” She asked me.

“Of course you can.” I said. “Adraba, on the contrary, it would be great if you can speak to them and have an effect.”

“You’ll see. In two minutes all these boys are going to put on Tefilin.” She stated with serious conviction as she walked up to the group.

“Hello. If I could have your attention for a moment I would greatly appreciate it.”  The lady addressed the young men.

“Let me tell you a little about myself. I am daughter of holocaust survivors. Both of my parents were persecuted, rounded up and sent to the concentration camps where they literally went through living hell just because they were Jews. In the German death camps the Jews weren’t able to perform Mitzvos as a direct result of the Germans desire to murder anything Jewish, physical or spiritual. Thankfully, the Germans did not get to kill the bodies of my parents, nor did they manage to extinguish their Jewish souls. When they were freed from the Germans’ murderous clutches, they married and built a true Jewish home founded on Torah and Mitzvos, which I am a proud product of.”

“I want to ask you an important question but first let me tell you about a picture*. There is a very famous picture taken at the time of the Holocaust of a Jew wearing Tefilin, which were visibly plied apart and desecrated by the Germans, in front of a bunch of mocking Nazi officers.”

“My question to you is, which man in the picture do you identify with, the Jew or the Nazi?”

The cocky smiles on the faces of the youths instantly were wiped off by her words, which visibly pulled at their heartstrings. The intensity in the air lingered in a momentary silence until it was finally broken by the head of the group.

“OK Rabbi, let’s put on Tefilin!” He said to me, motioning for me to come, as he rolled up his sleeve.

I put Tefilin on him, and then after him, all the boys put on Tefilin.

Whereas my words had absolutely no impact on them, the words shot out straight from the heart of this lady touched the Jewish core essence within those boys.

*The iconic photograph depicts Rabbi Moshe Isaac (or Moshe ben Isaac) Hagerman HY”D, led to the marketplace where Jewish men were beaten and humiliated on “Bloody Wednesday” July 31st 1940, in Olkusz, Poland, to the amusement of the Nazi officers.

Once I was waiting in line to go into Yechidus, a private audience, with the Rebbe while Rabbi Mendel Futerfus was waiting too next to me.

While we were waiting for our moment with the Rebbe, he made a statement with his question to me.

“What do you think a Rebbe is for? Just to give Brochos, and give people blessings? His role in this world is much higher than that. Nevertheless, why do you think the Rebbe’s are fulfilled? It is because he is a Tzadik whose essence is revealed; therefore when he gives a Bracha it is done whole heartedly. He really means it. However, in truth, every Jew is above nature, so every Jew’s Brachos would be fulfilled if he or she truly meant it, and bless another with their whole heart.”

“How many kids do you have?” Reb Mendel would always ask his Talmidim, students, whenever he saw them. After they answered, he routinely gave them his classic blessing, “May Hashem bless you to have your own Minyan!”

Reb Mendel’s son Berel once told me that once his father saw a student of his in 770, which he approached.

“How many kids do you have?” Reb Mendel asked him his usual question enthusiastically, not realizing he was touching a raw nerve with his question.

“We weren’t blessed with any kids yet…” He answered quietly looking away.

Seizing the awkward moment, Reb Mendel transformed it with a blessing.

“May Hashem bless you to have a child by this time next year!”

Around a year or so later that student and my father met again.

“I have good news to share with you! Your Bracha to have a child ‘within this year’ worked! We recently had a child.” The new father proudly said.

“I want you to know something. I already knew, without a shadow of a doubt a year ago that you will have a baby. I was certain of it because when I Bentched you, I blessed you with all of my heart, therefore I knew the blessing surely will be fulfilled!”

The Ohel isn’t a Vending Machine

By a Gimmel Tammuz Farbrengen, a few years ago, I told the following story which I had no idea at the time would affect a listener in such a palpable way.

The mail is delivered towards evening in the building I live in. The Shul is located on the ground level so many people who come to the Minyan have a habit of first collecting their mail and then coming in to the Shul to Daven Maariv, pray the evening prayer.

One night a certain neighbor comes into the Shul after getting his mail.

He laid the letters he just got from the mailbox on a table. They contained various notices ranging from disconnection letters to mortgage default.

“What will be? In addition to all this,” he points at the letters, “Next month I’m marrying off a child, and I have absolutely no money. What am I going to do?”  He asked me emotionally, visibly crushed by his situation.

He headed my advice and took those letters and brought them to the Ohel. He laid them down there and begged the Rebbe to save him from his seamlessly hopeless predicament.

Several days later, after picking up his mail, he comes to Shul for Maariv. He happily shows me a letter he has just received from the company which he bought life insurance from. Apparently he stopped paying the monthly bills and the letter contained a check for $25,000, which has accrued in his account over the years! This was most unusual, because usually when payments aren’t made they are deducted from the balance, but in this case they froze the account, canceled it and then refunded him the money.

His Tefillos, prayers, by the Ohel were answered. The check literally saved him from impending doom by enabling him to split the money between the wedding expenses for his child, $10,000, and his debts, $15,000.

The Rebbe had clearly beseeched the Almighty to arrange a tailored salvation for my neighbor.

You might ask where I got this brazen idea from, bringing his letters and placing them by the Ohel. I heard this from a Shliach friend of mine who did just that with his mortgage papers for the enormous Chabad house he had built, which were financially unbearable and ‘not letting him live.’

He told me how he came to the Ohel and placed his debt papers down over there and detailed his personal miracle which resulted in lifting the enormous weight of his debts off his shoulders.

One of the individuals who were seated by this Farbrengen openly stated that he was also being crushed by his debts and that perhaps he should do the same thing.

I told him that going to the Ohel and coming to the Rebbe isn’t like going to a vending machine. You put some money in and out comes a treat.

A person must really do some inner work and try hard to be sincere.

This neighbor of mine didn’t do any special work, but he didn’t need to. He was already so broken, his very essence just poured out with his Tefillos.

I saw this young man several weeks later and he updated me as to what had changed in his life since the Farbrengen in honor of Gimmel Tammuz.

He told me that his dire financial predicament also necessitated from him to try what was spoken about by the Farbrengen. However, he resolved to do it properly, with his whole heart, heading my warning that going to the Ohel doesn’t work like a vending machine.

Even though he had come to the Ohel on Gimmel Tammuz itself, he had felt that the one or two moments allotted for him to pray by the Tzion, due to the massive lines, wasn’t enough.

So he came again on the auspicious day of Yud Beis Tammuz, to really try to ask properly. He said the whole Tehillim and the whole Ma’ane Lashon. He tried to be as sincere as he could while pleading with the Rebbe to help him.

Several days later he got a good job offer, which he took, that literally put him on his feet.

As he was relating to me how the events unfolded he was smiling from ear to ear.

He didn’t just bring his debts to the Rebbe, he brought his heart.

Writer Bentzion Elisha is the author of the book 18 Frames of Being, a compilation of short soul stories available on Amazon.

« ‘The Rosh’ Opens Up at Historic Live Event
Video: Are You One with Your Judaism? »