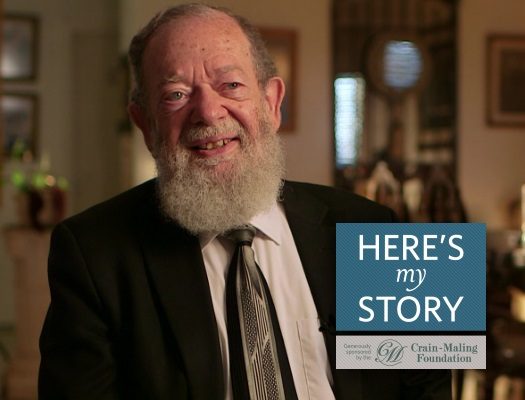 Rabbi Nochum Stilerman has raised over $400 million for various Jewish causes over the past 50 years. He lives in Jerusalem, Israel, where he was interviewed by JEM’s My Encounter with the Rebbe project in March of 2016.

My story starts when I and my family came to the United States from France in October of 1951. We had been staying in a Displaced Persons’ Camp (DP Camp) after escaping from Russia. Then, the Joint (as the American Jewish Joint Distribution Committee was known) relocated us to Williamsburg, Brooklyn, where they gave us an apartment for a few months, after which we moved to Crown Heights. Once we moved to Crown Heights, my father established the first grocery store there that was closed on Shabbat.

All his friends told him that he would not survive in this business being closed two days out of the week as, in those days, there were the so-called “blue laws” which forbid being opened on Sunday as well. But my father would never do business on Shabbat, and he asked the Rebbe if, under these circumstances, he should go into a different business. But the Rebbe advised him to keep the grocery store – and obviously, to remain closed on Shabbat.

Our other famous customers included the Koshnitzer Rebbe, the Bobover Rebbe, the Kozlover Rebbe, and the Novominsker Rebbe. The business never made a fortune, but we worked very hard and we managed to make ends meet. I myself had to get up at five o’clock in the morning to start preparing the deliveries, and my father, who got up even earlier than me, stayed in the store until 11 at night.

Then, one day – it was in 1953 or 1954, as I recall – a Lubavitcher named Yankel Lipsker came to my father and said he wanted to open another grocery store in the neighborhood, just one block away from ours. My father said to him, “There isn’t enough business for one family, how can there be for two? Besides this, the wholesale distributors of kosher products won’t deliver to you, since they are already delivering to me.”

But Lipsker pleaded, “I need to make a living.” So my father said, “Let’s go to the Rebbe; whatever he says, I will do.”

They went to the Rebbe, who heard both my father’s and Lipsker’s arguments. And then he said, “Under ordinary circumstances, Mr. Stilerman is correct. The two of you can’t both make it. But I assure you that the Almighty will provide a livelihood for both of you.”

My father heard the Rebbe and, because he totally trusted the Rebbe, he said okay. Not only did he allow Lipsker to open a competing grocery store, but he loaned him the money to do so!

Even more, my father actively helped him to succeed. If Lipsker ran out of a product, my father would send it over from his own inventory. I remember it well, as I was the one who would deliver the items to Lipsker. It seemed to me that this was a ridiculous arrangement and yet, somehow, they both made a living, as the Rebbe promised they would.

During this time, I most vividly recall making deliveries to the Rebbe’s mother, Rebbetzin Chana, who was always very cordial to me, offering me a glass of milk – hot in the winter, cold in the summer – whenever I came.

I grew very fond of Rebbetzin Chana. She was a joyful person, exuding a lot of optimism, always with a smile on her face. She gave me the feeling that she was like my Bubby, that she really cared about me – the little kid schlepping her groceries.

She would always ask me, “How is your mother? How is your father?” Sometimes, when I couldn’t bring her groceries and someone else did, she would call my father asking if I was okay.

While I was drinking my milk, she would ask me to tell her stories. So, to please her, I would relate bits out of the “Talks and Tales” monograph, which she seemed to always enjoy.

One day I told her, “Rebbetzin, I read a funny story and I was wondering if it is true.” She asked, “What is the story?” So, I told her what I read – that when the Previous Rebbe was a little boy, he asked his father whether the angels can count. His father responded that he didn’t know the answer, but he did know that each time a person recites a psalm, he creates an angel, and that angel ignites a chandelier that burns in heaven above and on the earth below. I told her this and asked, “Is this true?”

She answered me, “Not only is the story true, but that is what really happens.”

So, I said, “In that case, I will recite a psalm. I won’t say the whole Book of Psalms, but I will say one or two, because I would also like a chandelier.”

Another time, I asked her, “Rebbetzin, what is the Rebbe’s favorite prayer?” I don’t know what put that question into my head, but I was a teenager by then, about to go to college, and I wanted to know what the most important prayer is, so that I could have a single prayer to recite with total concentration.

She answered, “All the prayers are important, but yes, there must be one that is more important than the rest. I don’t know what that is for the Rebbe. But the next time he is here, I will ask him on your behalf.”

The following week, when I delivered to her, she said, “I am so happy to have an answer to your question.”

She paused, and I waited with great anticipation to hear the answer.

“It’s a very short prayer,” she said. “It’s the very first prayer we say in the morning, Modeh ani le’fanecha – I give thanks before You, Living and Everlasting King, that You restored my soul to me with compassion; great is Your faithfulness.”

I was surprised but also very happy to hear it. And I adopted this prayer as my own personal favorite as well.

It became my life’s goal – not to disappoint G-d in what I accomplished during each day. I learned that from the Rebbe, by way of the good offices of Rebbetzin Chana.