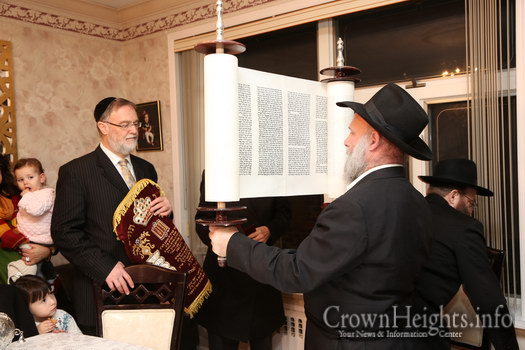 Being that Shavuos – Mattan Torah is this Tuesday night; I thought it would be appropriate to relate a Yechidus that a group of college students had with the Rebbe, which took place in the 50’s. I heard it from my father in law, Rabbi Moshe Goldman sheyichye.

In the 50’s there were numerous groups of Jewish college students that came to the Rebbe, and the Rebbe would talk to them in his room. After the Rebbe spoke, he would ask them if anyone wishes to ask him a question, and he would answer them.

With this particular group, one of their non-religious Jewish professors came along, and evidently he wasn’t too happy as he noticed, that some or many of the students were taking the Rebbe’s words to heart, and were resolving to strengthen their commitment to Torah and mitzvos. So when the Rebbe said, he is open to hear and answer anyone’s question, the professor himself decided to ask, what he thought would be a knockout question.

His question was, “Rabbi, how do we know for a fact, that the Torah was given to Moshe and the Jewish people from Hashem (G-d). Perhaps, Moshe who was an extremely intelligent person, surrounded himself with other incredible minds and wrote the Torah?”

Obviously, he thought, the Rebbe would reply, that this is our tradition and he would be able to tell the students on their way home, you see, the Rabbi couldn’t give a decisive and coherent answer.

However, to his consternation, the Rebbe replied, I will give you three solid proofs from the Torah that it was written and given by the Creator – Hakodosh Boruch Hu, and not by man, even the smartest man.

In the Torah it is stated that an animal is kosher only if it has completely split hooves and also chews its cud. If it has neither of these two signs or even if it has only one of these characteristics, it is unfit to eat as it is not kosher. The Torah then notes, that there are only four animals that either have split hooves or chew their cud, and are therefore not kosher.

Now from the time the Torah was given to us, in the Hebrew year of 2448, until now, more than 3300 years have passed, and numerous countries and indeed continents have been discovered. In those years, hundreds and indeed thousands of animals have been discovered, animals that did not exist in the inhabited lands that Moshe and the Jewish people were aware of. Yet, the number of 4 animals, with only one of these two characteristics has not changed. Is that not a proof that our holy Torah is not man made, but rather made by the Creator Himself. How would people know which animals are living on the other side of the world?! How can they say for a fact that there are no more than four such animals?!

In Parshas Behar, (which is towards the end of Leviticus), the Torah instructs us to refrain from working the land on the sabbatical year. Then the Torah states, if you say, what are we going to eat that year, if we don’t plant and harvest? The possuk continues; I will give my blessing and the earth will produce the year prior to the Sabbatical year, enough grain to last until you are ready to harvest the following years produce. Meaning, it will take care of the needs of the 6th year, the sabbatical year, and the beginning of the first year of the new cycle.

Now which man, especially a wise man will make such a promise for generations to come. Everyone realizes and knows that things can happen that are beyond his control; a drought or flood can create havoc, and then they will be proven false. So no intelligent person would intentionally set themselves up for failure and ridicule, which would cause people to say not only is that point wrong, but everything else in it is also not definitely so. But, the only one that has the ability to make this statement and give this guarantee, is the Creator Himself. And just as that is a truth that lasted throughout the generations, so too is everything else in the Torah an everlasting truth!

So these are the proofs that the Torah was given to us by the Creator and not a man, even by and from the wisest of men.

My father-in-law, doesn’t remember hearing at that time what the third proof is, and if anyone remembers hearing it from others, please share it with all our readers.

May we conclude with the words of the Rebbe, “May we all merit to receive the Torah b’simcha (with happiness) u’b’pnimius (and internalize its message).