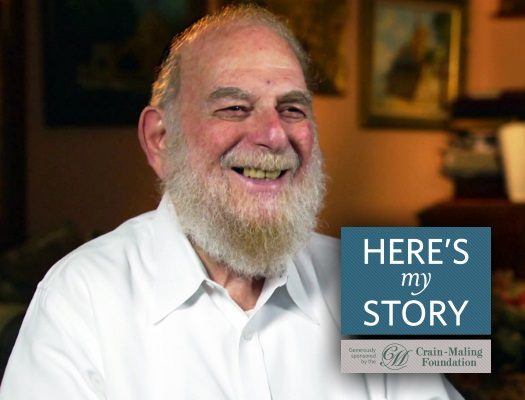 Rabbi Zev Litenatsky is an accomplished educator who served as a principal of several schools in Los Angeles between 1960 and 2007. He was interviewed by JEM’s My Encounter with the Rebbe project in Los Angeles in September of 2011.

I grew up in Montreal, where I was educated in the Chabad yeshivah, Tomchei Temimim. In my youth, the availability of kosher products in the city was very limited and so my father, a kosher butcher, opened the first glatt kosher meat market in the city. He did this at the direction of the Rebbe, and the business quickly prospered thanks to the Rebbe’s blessing.

In connection with opening this business, my father had a number of meetings with the Rebbe, and he traveled several times to New York. He took me along in 1954, on the occasion of my Bar Mitzvah.

I recall coming into the Rebbe’s office with my father, and feeling as if I was being x-rayed by the Rebbe’s eyes, as if he could look through me and know everything that I did from beginning to the present. Yet, when he started to speak, his voice was very soothing and my nervousness disappeared.

The Rebbe invited my father to sit down, while I stood of course, out of respect for them both. The Rebbe then asked me what I had seen on Eastern Parkway – the street where Chabad Headquarters is located.

I didn’t how to answer the Rebbe, and I wondered if this was meant to be some kind of trick question.

“What did you see?” the Rebbe repeated.

“I saw people,” I muttered.

“No, I didn’t pay attention to the trees,” I admitted, though in fact the medians down the middle of Eastern Parkway are full of trees, and there are also trees along the sidewalks on both sides of the street.

“If you would have paid attention, you would have noticed that there are two types of trees planted along the parkway. One tree grows by itself because it has strong roots, but the other needs a fence around it to support it and help it grow straight and tall. You should learn from the tree that has strong roots. If you are steeped in Torah the way a son of a family with strong religious roots ought to be, then you too will grow up strong, for as our rabbis say, a tree with strong roots can stand up to any storm and no winds can tear it down.”

It was a tremendous lesson to me – one I never forgot and which I have repeated to my children.

The next memorable encounter I had with the Rebbe came in 1959, on the occasion of my engagement to my future wife, Devorah. Present at this audience were my father, my father-in-law, Devorah and I. And the question came up how Devorah would cover her hair after we were married. Her sisters lived in Israel at the time, and all covered their hair with headscarves, which is what she wanted to do, even though it is the custom for Chabad women to cover their hair with wigs.

The Rebbe had asked Devorah if there was something on her mind, and she brought this up. It led to a long discussion between the Rebbe and Devorah – lasting, as I recall, about 45 minutes – in which she explained her position, and he explained to her why headscarves were problematic. He said, “Imagine yourself coming to a wedding, where everybody is all dressed up in their nicest clothes and all the women are wearing wigs, but you are wearing a headscarf. You will feel uncomfortable, because you won’t look as nice as them.”

He went on to add that when something feels uncomfortable, then people tend to discard it after a time, which is why it is better to prevent any such problem ever creeping up.

After the meeting, Devorah agreed to cover her hair with a wig, and immediately went to purchase one.

However, this was not the end of the issues surrounding my engagement. The biggest problem was that my in-laws wanted to delay the wedding until Devorah had graduated college. I already had my college degree and was working as a teacher in the Jewish school system which paid me about $2,300 a year.

I worried that this was not enough for me to support a future family but I was very taken aback by their stance that she couldn’t marry me any time soon, so I wrote to the Rebbe about my worries and frustrations. The Rebbe answered with a long letter, in which he stated his opposition to any postponement of the wedding. He wrote: “With regard to the date of the wedding which seems to be delayed. My view on this subject is well-known. Namely that I do not believe in delaying the date of the marriage once two young people decide to get married.”

But he also chastised me a bit. He wrote: “With regard to your apprehension concerning your economic position in the future, especially after your marriage, I am surprised that you should worry about these things, for who can foresee what can happen within a year or more. Of course, one has to prepare a suitable vessel to receive G-d’s blessings, but you already have a profession, and so you should have every confidence in G-d as far as your future is concerned. Such faith in itself increases the channels to receive G-d’s blessings. Besides, anxiety is not only useless but also harmful. Therefore, the Jew must have simple faith in G-d – the faith and security which a child finds in his father and faith – which faith … serves as a channel and vessel to receive G-d’s blessings.”

Taking the Rebbe’s words to heart, I ceased to worry. My in-laws were convinced not to delay the wedding. And Devorah finished her college degree via a correspondence course. Thank G-d, everything turned out well.