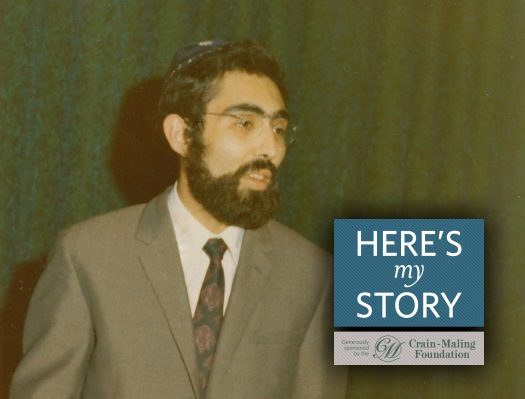 Beginning at 19 years old, when he was the youngest synagogue minister to ever serve in the United Kingdom, Rabbi Dov Lent held various rabbinical and teaching positions for twenty years. In 1987, with the Rebbe’s blessing, he opened a dairy company, which is still running today. He was interviewed by JEM’s My Encounter with the Rebbe project in his home in March of 2015.

Among much of my correspondence with the Rebbe, I merited to receive many pieces of medical advice from him.

I would like to share one of those stories. In 1968, when my cousin’s wife was expecting her second child, she  developed ulcerative colitis, which was accompanied by severe internal bleeding and because of this, she lost a great deal of weight and was critically ill. The specialists at the hospital couldn’t stop the bleeding, and she had reached a very critical state, to the point that they gave up hope for her.

The family asked me to write to the Rebbe describing her condition and treatment. A week later, he replied: “You should continue with your medication, however I am somewhat surprised that in your letter to me you make no mention of a rice diet, which in your case would be curative.”

We thought: What on earth does that mean? A rice diet?

The Rebbe continued, “What is more important however, is to check your mezuzot and your husband’s tefillin.”

When these were checked, it was clear that they required immediate replacement, which we saw to immediately. My cousin’s wife also started eating boiled white rice four times a day. And, strangely, after just a few days, the bleeding stopped. After about a week, her condition was visibly improved and she started putting on weight. After a month, it became clear that there had been a complete transformation, and there was no longer any risk to her either losing the child or losing her own life. Her recovery was speedy and incredible.

Sometime later, my uncle was attending a medical conference in Liverpool when he noticed a distinguished gentleman sitting across from him in the dining room with several bowls of rice. He couldn’t help but be reminded of the Rebbe’s advice to his daughter-in-law. My uncle said to him, “This looks like the diet that my daughter-in-law is following.” He explained how my cousin’s wife had been critically ill and started eating rice which seems to have cured her.

The distinguished gentleman was astonished. He introduced himself as a professor of gastroenterology at Cambridge University and said, “I have just discovered that there’s a property in rice which can cure ulcerative colitis. But my research has not been published as yet. Nobody else knows about it!”

A few years earlier, I myself had attended two yeshivot. One in Manchester, and the other in Gateshead. In 1964, following these years learning, I was faced with a dillema, should I continue learning, or shoud I take up my place at the university which I had earlier postponed in order to attend yeshivah. As a religious young man I had many concerns about going to university as the atmosphere was far from conducive to living an observant life. I decided seek the Rebbe’s advice on this issue, joining a chartered flight to New York arranged by Chabad.

During our meeting, the Rebbe resolved my dilemma by saying: “When you go to the university, don’t study philosophy or psychology or anything like that.” Instead he advised me to study language, linguistics and the history of science.

Then I asked him, “How do I deal with the secular environment?”

“The best way to deal with the evil inclination, and with an undesirable environment in particular, is not to engage in a fight with it,” the Rebbe responded. “Don’t put yourself in an encounter with it in the first place! Rather, take your mind away from the whole temptation by saying to yourself, ‘I am busy! I have no time! I have got learning to do, a mitzvah to fulfill, I’m helping someone.’”

I took his advice to heart and studied the topics he had advised. I was able to cover the required material quickly, leaving  me with plenty of free time to learn Torah. I used to leave school early and run to meet my Torah study partner.

Eventually, I got involved with the Hillel House on campus, where I started to give classes on various Jewish topics, which became quite popular. I also arranged for observant Jews to spend Shabbat on the campus from time to time. So rather than the secular environment influencing me in a negative way, I was able to influence it in a positive way. I was able to influence several students to begin observing Yiddishkeit, who eventually married and raised wonderful observant families. All thanks to the Rebbe’s advice.

I graduated in 1967 and got a teaching job and I supplemented my income by translating some of the works of a French psychiatrist named Henri Baruk, who was very famous for rejecting the methods of psychoanalysis formulated by Sigmund Freud. He believed that mental disorders should be treated by inculcating the patient with a strong set of moral principles such as we find in the Torah. With his consent, I translated one of his books, but nobody wanted to publish it – his ideas were just too controversial in England.

I didn’t tell the Rebbe about it, by the way. So imagine my surprise when, in a subsequent audience, the Rebbe asked me for help in finding non-Freudian psychiatrists or psychologists. He said that he knew many religious people in need of psychological help but most therapists advised such people to abandon religion. I was most surprised and humbled that the Rebbe should ask me for my help, and of course I said, “I do happen to know one such doctor in Europe.”

Immediately, the Rebbe asked, “Do you mean Henri Baruk? I am very pleased with his work. Can you find me more like him and make a list for me?”

So I did try and I did find a few therapists who saw religion not as a hindrance but as a stable influence on people whose lives were in chaos.

At this time I was ready to get married and really needed to increase my income in order to provide for a family. Among the options I considered were going back to school to study accounting, law, pharmacy – all in all, I came up with a dozen possibilities, the last of which was becoming a rabbi of a small synagogue. When I submitted this list to the Rebbe, he crossed out every item except the last one, and that was the one I eventually took up.

However, at first I hesitated to accept the job, because one of the many functions I had to fulfill was supervising the local Kosher butcher. This I felt was absolutely beyond me, as I had a strong aversion to blood.

I sought the Rebbe’s advice on this issue, and he answered me as follows: “Since G-d has presented you with this job, it is a sign that you can do it. As for the blood, I can understand how you feel if you were watching animals being slaughtered. But all that you will be seeing in the butcher shop, are remnants of blood which will be all dried up, and this will not make such a strong impression on you.”

Of course, I took the job and within a short time I discovered severe kashrut violations. I was fortunate to be able to prevent the entire community from consuming non-kosher meat.

As the Rebbe helped me with this, he helped me with many other things as well. Thank G-d, I have many letters from him and they are my treasure. He looked after me like a close and loving father — full of concern and tenderness. We all miss him so much.