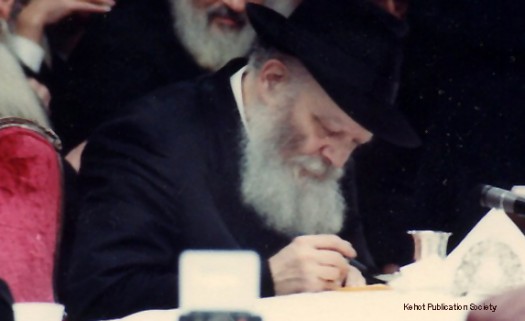 One of the main points discussed by farbrengens on and around Yud Shevat was, how does one maintain their hiskashrus (connection) to the Rebbe? Obviously the answer is by learning his Torah, whether it is his Sichos, Maamorim or letters as well as fulfilling his hora’os (guidance and directives). This includes conducting your life in a chassidishe manner, going on mivtzyoim and learning Chitas and Rambam.

At one farbrengen I heard part of the behind the scenes of how and why the Rebbe began to be magiah (review and edit) his sichos.

One of the Rebbe’s early directives at the beginning of his nesius (leadership) was that on Shabbos, chassidim should review Chassidus in shuls, including non-Lubavitch. In each community, Chassidim eager to fulfill the Rebbe’s horoah (directive), went to the local shuls and asked permission to give over a thought of Chassidus. Very often when permission was granted it was to speak during Shalosh Seudos (the third meal that is eaten on Shabbos, between Mincha and Maariv).

Numerous times, especially if it was shortly after the Rebbe farbrenged, the bochurim and anash would review in the shul they spoke, a thought that the Rebbe discussed at the farbrengen. However, there were times that not everyone understood the thought clearly or there was a disagreement of what the Rebbe meant. This created confusion, as sometimes a person may had missed a vital point in what the Rebbe said and explained.

So the people that would transcribe the Rebbe’s words after the farbrengen, wrote a letter to the Rebbe requesting that the Rebbe edit and correct the way they transcribed it. This way the thought of the Rebbe cam be studied extensively and when the person gives it over, it would be with a much more thorough understanding. The Rebbe did not answer so they wrote this request, a second and a third time, explaining why they are requesting this.

After they sent the third letter, they were called into mazkirus (the secretariat) by Rabbi Hodakov, who was the Rebbe’s chief secretary. He said to them, You wrote that you feel it is important for the Rebbe to edit his sichos. But you also must realize that the Rebbe is not sitting with empty hands. His day is completely occupied.

Now let me ask you, what do you think he is doing throughout the day and night? After a moment he continued, You should realize, the Rebbe is busy with saving lives. People are constantly asking him if they should have an operation and which doctor they should use etc. this is a matter of life and death.

So now you want the Rebbe to stop that and edit your transcriptions. In other words you are saying this is more important than that!

One of those present replied, this also is pikuach nefesh, as this will revive the spirit of chassidim! They will have words of the Rebbe to think about and live with

Rabbi Hodakov was quiet for a moment and then asked “And can you promise that if the Rebbe would edit it, the chassidim would learn it?!!

Additionally, it was noted that Rabbi Binyomin Klein (another one of the Rebbe’s secretaries) often mentioned, that the Rebbe worked on reviewing the sichos TEN HOURS A WEEK.

One understands how much the Rebbe accomplished in a minute, so how much more can he accomplish in ten hours?! Yet for our sake, he set aside all the important and vital work, week after week, just in order that we receive our nourishment.

So it incumbent upon us to toil on the sichos, similar to the way the Rebbe toiled on editing it.

This point is appropriate to mention and contemplate during any week of the year, especially in the days following Yud Shevat and for parshas Yisro that describes how bnei Yisroel (the Jewish people) accepted the Torah.

However, it is also especially connected to this Shabbos, chof beis shevat, the yahrzeit of our Rebbetzin. She, more than any one, truly moved aside in order that the Rebbe can be totally devoted to his chassidim and indeed to the entire Jewish nation. She exemplified what it means giving up something that is so precious for yourself, in order and for the sake of others.

I heard that Reb Alexander Sender Raynin, a relative of the Rebbe and Rebbetzin, related the following:

When we lived in Paris, my wife and I would go for a leisurely walk on one of the spacious boulevards in Paris. One pleasant Shabbos afternoon, to our delight and surprise we met the Rebbe and Rebbetzin who were also out walking.

After greeted them with a gut Shabbos, being that we were relatives and very close, I sked the rebbe in amazement, “I understand that my wife and I, being the simple Jews we are, take a stroll on Shabbos. But you, the [Lubavitch] Rebbe’s son-in-law, and someone who I know that every second of his day is precious, how is it that you are taking a stroll?

So after we contemplate what the Rebbetzin gave up, in order that we be nourished and taken care of, let us too give up some of our leisure time etc. in order to devote it to learn the teachings of the Rebbe and conduct ourselves in the true path he guides us.

Rabbi Sholom Avtzon is a veteran mechanech in the United Lubavitch Yeshiva and is available to farbreng in your community. He can be reached at avtzonbooks@gmail.com.