« Shabbos at the Besht: The Holy Encroachment Paradox
Weekly Thought: Keeping the Korban Pesach at Home » 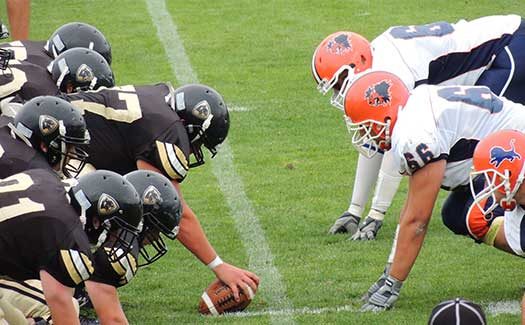 One year our friend Yaakov received a phone call, Yisroel, his best friend for many years was calling to inform him that he finally found his bashert, a wonderful lady and the chassunah is going to take place sometime later in the year.

Yaakov wished Yisroel mazal tov and told him, ‘Nothing will prevent me from attending your wedding. Not even a blizzard. We waited so long for this wonderful day, count me in. And of course if I can help you in any way, please call, it would be my pleasure.”

Some time passed and the invitation arrived. Yaakov eagerly opened it and seeing that the wedding was taking place in a hall that is not even two miles away from his house, he asked his wife to please circle the day on their calendar. I am so happy for him, he is such a wonderful person, there is no way I can miss it.

The weeks pass by and then Yaakov is looking at the calendar and is horrified as he realizes; his best friend did the unthinkable; the wedding date is the evening of the Super Bowl, and this year their home team is in it.

Now Yaakov was one of millions of people that just had to see the biggest sporting event of the year. Sometimes he even managed to obtain those coveted tickets, while other times he had to suffice watching it with a group of his close friends. Yes, for so many, the Super Bowl is an event not to be missed.

Momentarily he is torn, what should he do? Obviously he has to be by the wedding, but does he have to be there the entire time? Perhaps it would be enough to be there from the very beginning, until after the first dance and then he can at least watch the second half.

On the other hand, whenever he was in a crunch, Yisroel was always available for him, no matter what time of the day or night it was. Was it right or decent to walk away from his friend’s happiness in order to watch the game? Is that more important than a friendship? Or does this inner conflict reflect his true colors, that he is a friend that can’t be counted on. Is he going to be like some other “friends” that are making up excuses that they are out of town that day or something else?

For a few days, Yaakov was confused, until he concluded; no matter what I must be by the entire wedding, from beginning until the end. I can’t disappoint Yisroel on the happiest day of his life. So I have no choice but to record it and watch it afterwards. This way I will see and enjoy all the great plays.

Sure enough Yaakov came early for the kabbalas ponim (reception) and chuppa, and really danced the entire time, he truly rejoiced in his friends happiness. How happy he was for him. After bentching and sheva brochos, Yaakov hugged his best friend once again, wished him mazal tov and entered his car. Turning on to the radio he hears the reporter hoarsely shout, “This was the greatest comeback victory in Super Bowl history.

The — did the unbelievable, they were down by twenty-one points in the final quarter and then had a run of twenty four unanswered points! What a comeback! What an awesome win. Our team did it. WE WON! WE ARE THE CHAMPIONS!!!

Yaakov was ecstatic, his team did it. They were the underdogs, most sports writers wrote them off, but they pulled it out. Unbelievable, but true. He is now going to watch and enjoy the entire game.

He sat down on the coach nonchalantly and took out his smart phone, to do some chores and catch up on the latest news, while looking occasionally at the screen. His wife noticed this and asked him, “Yaakov, why is this year so different than every other year? Normally you so tense during the game. You sit on the edge of the chair and request of me to make sure no one disturbs you. You turn off your phone and every time the opponent scores you groan in distress, and when your team loses the ball by an interception or fumble, you shout in anguish. Then when your team scores or takes away the ball from the opponent,  you become ecstatic and electrified, but now you are sitting comfortably smiling the entire time.

Even now that your team is behind by two touchdowns, you are smiling, as if this pleases you. What happened?

Yaakov replied with a large grin and said to his wife. Normally I don’t know what is going to happen, and yes I am tense and do everything you mentioned. However, as I was driving home, I heard that we won. So what does it matter if the quarterback and the entire team initially had a real lousy day. Who cares if we are behind by fourteen points or in fact it is going to be twenty one points, since we are going to win.

So the setbacks don’t upset or derail me, we are ultimately winning.

Dear reader, I heard this moshol (parable) from mashpiim, many years ago, to explain why Yaakov avinu desired to inform his children and descendants when Moshiach is coming. He was telling them, “Yes you are going to experience extremely hard and difficult situations, but you are going to persevere and overcome it. Yes it is going to be an astonishing comeback victory. Such a minute amount of people are going to help the entire world of billions and billions of people to come to the realization that there is only one true G-d. What a celebration that is going to be.”

So yes fellow chassidim, we are indeed facing many challenges, some harder than others and some people can become disillusioned and think, we are so far behind, it is a lost cause. But just like the husband who sat there calmly even as his team was falling further and further behind, because he knew the outcome, he knew at the end he is on the winning team. We too were informed of the outcome that Moshiach is coming in our days. So, we cannot allow the setbacks to discourage us, they are only temporary. Rather let us strengthen ourselves and finish off those final sparks that have to be polished and may we all merit the coming of Moshiach , NOW!

Rabbi Avtzon is a veteran mechanech in the United Lubavitch Yeshiva, Ocean Parkway, and the author of numerous books, including the acclaimed Rebbeim Biography Series and the Early Chassidic Personalities Series. He is available to farbreng in your community and can be reached  at avtzonbooks@gmail.com

« Shabbos at the Besht: The Holy Encroachment Paradox
Weekly Thought: Keeping the Korban Pesach at Home »