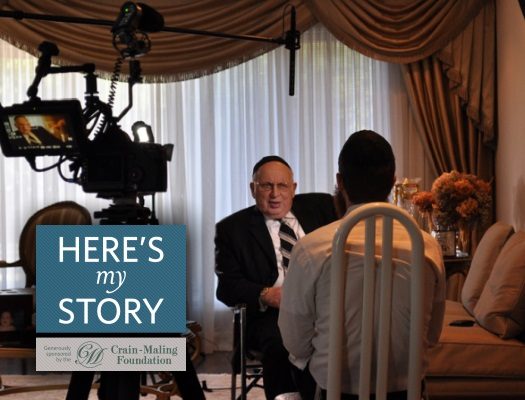 Here’s My Story: The Full Picture

Since 1976, Shlomo (Solomon) Jakobovits has served as the principal of the Eitz Chaim Orthodox Day School in Toronto, Ontario, where he was interviewed by JEM’s My Encounter with the Rebbe project in June of 2012.

After I finished my studies at Gateshead Yeshiva in England, I enrolled at Yeshiva University in New York. And while I was there, I had a Lubavitch friend named Nochum Wolosow who suggested that I go see the Rebbe.

This was 1953 and, in those early days of the Rebbe’s leadership, it was possible to talk with him at length. So I came to the appointment with a list of questions, and I was there for two hours.

It was quite a night. And, although it was long ago, I still remember the topics we discussed very well.

The Rebbe answered my questions in a very rational way. And he was quite willing to say “we don’t know.” He showed himself to be a very intelligent human being, a sympathetic human being – not somebody disconnected from modern society.

I remember the first question I asked was: “What is the Lubavitch movement about? We don’t find any reference for it in the Talmud. It only goes back to the late eighteenth-century, to the Tanya. So what does this movement stand for? What is a person who is not part of this movement supposed to understand?”

He said, “I am not going to answer the exact question that you ask, but I am going to tell you this: Yiddishkeit today is on a decline, and Chabad is needed to reverse the trend.”

He went on – and I am paraphrasing his words here – “Today’s world is different from the world of olden days. The Jewish world of Eastern Europe has been destroyed, and the Jewish world of the West is in a downtrend – observance is waning. This is tragic. But Chabad has the ability to reverse this decline and rejuvenate the Jewish people. Chabad teaches that those who are totally devoted can spread Yiddishkeit to others. And this type of teaching – from the mind and the heart – is what Jews are prepared to accept.”

I had more questions, so I changed the subject. I asked him, “Why did our sages or our prophets not come up with any significant inventions. We speak of them with utmost respect, but why, with all their wisdom, didn’t they invent anything? Why was it left to others to discover electricity, to make progress in medicine and technology?”

He answered, “That is not what the great minds of the Torah were destined to teach the world. Every person of greatness has a particular task, and technology was not their field of innovation. Think about it: Would you have expected Moses to go up Mount Sinai in an elevator? Perhaps it might have made things easier for him – as loudspeakers would have helped the rabbis to spread G-d’s word. But that is not what was expected of them.”

My next question concerned the veracity of some of the pronouncements made by our sages. We find statements in their writings that contradict the facts as we know them. For example, they said that Torah study and Torah observance guarantee a long life. But we find that observant Jews get sick just as much as anybody, and good people suffer as much as bad people.

He began his reply with a general explanation: “When we come into this world, we see bits and pieces of it. When a construction company is putting up a building, we see a hole in the ground over here; we see broken pieces of wood over there. We see a pile of stones, a pile of dirt, lots of mud… It all looks very ugly and uninviting. Only later, when the building is complete, when everything is in place, does it look attractive. Everything has its logical place. And this is what the Torah verse often cited at funerals really means, ‘Hatzur tomim pa’aloh, ki chol derochov mishpot – When the work is complete, then we will see that everything fits in.’ The scattered components give a totally wrong impression.”

And to my follow up questions, he gave the same answer, “We cannot see the total picture now. We are very limited. We are limited in space, in time, in depth. We see only bits and pieces. And therefore we are in no position to judge.” He was not going to try to explain why this or that contradiction exists and why this or that happens. He just said, “We don’t have answers to these things.”

And I regard his to be a well thought-out answer. Others might have tried to explain this by quoting the Talmud that the sufferers’ reward will come in the next world, but he didn’t take that route. He said, “We don’t know everything.”

I also asked him about what will happen when the Mashiach comes. Specifically, I wanted to know about animal sacrifices. I mean, if you start slaughtering animals in the synagogue, people will walk out; they will not accept that. Or what will happen when the Temple is rebuilt and that is the only center of worship? Can you imagine closing down five thousand synagogues?

And his answer was that we know that the Mashiach will do certain things in the physical world – such as through him all Jews will return to the Land of Israel and the Temple will be rebuilt – but we have to understand that it will be a different physical world. He said, “I am telling you that people’s mode of thought will be totally different. I agree that it is hard to imagine animal sacrifices in today’s society. It is very hard to imagine. But, that is because we are thinking in terms of the current mindset. When the Mashiach comes that will change radically – we will be thinking in totally different terms. And, therefore, these questions just won’t apply.”

That is how our discussion went. And I walked out very impressed with him.

Many years later, I came to one of Chabad’s gatherings. I was standing on the side when the Rebbe was going out and, as he passed, he noticed me. “Jakobovits,” he said, “do you recall our discussion?” I was taken aback that he should remember after all that time, but I replied, “Yes, yes, of course I do. And I am still very grateful.”

As I am today.