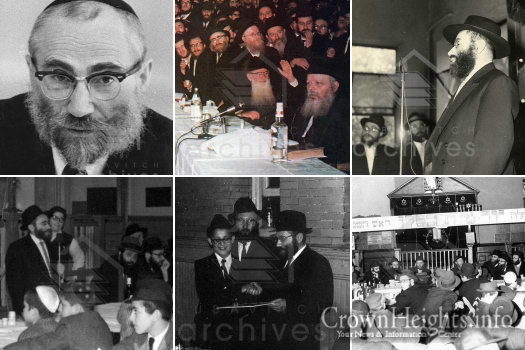 In honor of the Yahrtzeit yesterday of Rabbi Yosef Menachem Mendel Tenenbaum, longtime principal at United Lubavitcher Yeshivah, we present you with several stories he experienced with the Rebbe, compiled and written by Rabbi Dovid Zaklikowski of Lubavitch Archives.

When the Rebbe was still known as the Ramash, he would come to the beis midrash library in 770 to consult different seforim. Rabbi Tenenbaum once approached the Rebbe there and asked for his approval for an explanation of a certain concept in Chassidus.

After Rabbi Tenenbaum explained his idea, the Rebbe said, “I hear what you are saying, but I don’t hold that way…”

Once, when the Rebbe was encouraging people, during a farbrengen, to daven with more concentration and sincerity, the Rebbe turned to Rabbi Tenenbaum and said, “Zechor yemos olam…” (Remember the days of old…) (Devarim 32:7).

In Debt for a Miracle

George Landberg was an English teacher at the yeshivah when his wife gave birth to a son. In the hospital, one of the nurses mistakenly placed 70 times the prescribed dose of silver nitrate drops into the newborn’s eyes (today the nitrate drops come prepackaged). “The skin near the eyes looked like it was burned,” Mr. Landberg recalled. The doctors said that the child would be blind in both eyes.

Rabbi Tenenbaum tried to calm him down, wrote down the family members’ Hebrew names and told him that he would write to the Rebbe for a bracha. The Rebbe gave his bracha to the child, and over the next few weeks the baby’s eyesight improved. “The doctors could not believe that it was possible to change for the better,” Mr. Landberg said. “They told me that it was a miracle.”

Mr. Landberg agreed to put on tefillin every day.

When Mr. Landberg retold the story, he always said that he hadn’t missed a weekday of putting on tefillin, and that his son puts on tefillin, too.

Running to the Bus

This change created a new opportunity. If all the children who were going home on the bus from yeshivah would make it there on time, they would be able to see the Rebbe returning from 770 to his house on President Street.

Rabbi Tenenbaum did not like the running that was going on. Seeing that it was a daily occurrence, he approached the children and requested that they not run.

However, when they told Rabbi Tenenbaum that they were running so they could see the Rebbe returning from 770, he was very pleased and gladly agreed that they could continue to rush to the bus.

During a yechidus before Uncle Itzy’s wedding in England (on Adar 7, 1975), the Rebbe told Rabbi Tenenbaum, “You will surely visit the mosdos in London.”

During the days we were in London, Rabbi Tenenbaum went from one Chabad institution to the next. The family could only persuade him to spend a few hours sightseeing at Buckingham Palace.