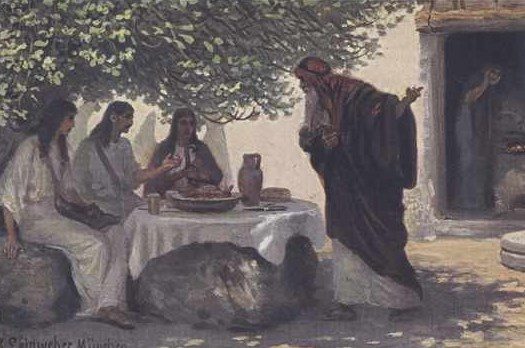 Is hosting friends considered “Hachnasas Orchim”? Do I really need to go “all out” for this Mitzva? What if the guests are not as pleasant and “fun” for my liking? Is it a “Chassidishe thing” to be into this Mitzva? Rabbi Avrohom Brashevitzky, Shliach to Doral, FL, shares his thoughts on this week’s Parsha – Vayeira.

When Avraham saw what he thought to be three guests, he ran towards them to invite them in. As the Chazal tell us, this was only three days after his Bris and he was still in much pain. Not to mention that he was no youngster; he was 99 years old! Yet, he ran towards his guests.  Then the Torah describes how Avraham personally tended to the guests, even “running towards the calves”.  Question: Avraham was a very rich man and he had many servants- why then did he insist on running and doing everything by himself?  Why didn’t he just delegate some of the tasks to his servants?

When Rabbi Levi Yitzchak Bardichiver was a young newlywed living in his father-in-law’s home, he would personally do many menial tasks to help serve the many guests who came to the home.  His father-in –law, who was a well to do man and evidently very hospitable, asked Reb Levi how come he insists on serving the guests himself by himself –why not leave it the Goyim who work in his house? Reb Levi replied, “such a great Mitzvah and I will let a Goy share in it”?

This is also reminiscent of a story of one of the great Chassidim of the Tzemach Tzedek.  As many Chassidim did in those days, they would travel to Lubavitch for Tishrei.  They would trek all the distance by foot, sometimes for several weeks, until they arrived at the Rebbe. In his older age, this Chosid found it too difficult to do so every year, as this was very physically taxing. So, instead, he began doing this trip on a bi-yearly basis. Understandably, it was a big challenge for him to not be with his Rebbe during those years that he stayed home. His grandchildren tried to encourage him to travel to the Rebbe by coach. “Money is certainly not the issue (they were very comfortable), why deprive yourself of being in Lubavitch for Yom Tov?”

The elder Chosid replied: “after 120 I don’t want to deal with horses”! He explained that when he stands before Beis Din Shel Maala he doesn’t have much to rely on.  However, there’s one Zechus which he is certain that he will undoubtedly be presenting. That is, the merit of having traveled to The Rebbe all the years that he did. “What will be when I name these years and suddenly the horse which pulled the carriage will appear to demand his share of the Mitzvah? I’m certain that after some back and forth I’ll be able to convince the Beis Din that the horse deserves no credit, as he had gone just for his reward of hay. This I don’t want! I refuse to have to deal with horses after My Neshama has departed this material world”.

Avraham Aveinu was very dedicated to Hacnosaas Orchim and giving to others. He understood, and through his actions, taught us to appreciate that whenever possible we must strive to do the Mitzvah fully on our own. Of course, one needs to be practical and not over tax their physical abilities. This is meant merely as perspective as to how one’s attitude should be towards this great Mitzvah. Ask yourself: “Should I try to cook and prepare for the guest or just get some take out and use the time for other less important tasks?”

The Mitzvah of Hacnosaas Orchim is so great that when The Alter Rebbe desired to have a son, his Rebbe The Maggid of Mezritch advised him to utilize the Segula of Hachnasas Orchim. In Tehillim Chapter 119 it says “Bameh Yezake Naar Es Orcho”. The Maggid translated it to mean “how does one merit (to have) a Naar (son) – through the Mitzvah done with Orcho (his guest)! Not always is the host doing the guest a favor. Perhaps, as is the case in Tzedakah in general, the guest is providing an outstanding opportunity to the host!

Take a moment to ponder how great of a servant of Hashem the Alter Rebbe certainly was. The many Chassidim he had, the amount of teachings he disseminated. Add to that the fact that he supported the many poor Chassidic families living in Israel. Yet, he was advised by his Rebbe to involve himself in this great Mitzvah in order to merit a son.

Hachnosas Orchim, as we are taught in this Parsha, is “even greater than receiving the face (presence) of The Shechina”! Avraham excused himself and left the presence of Hashem just to attend to his Orchim. Not always is tending to one’s guests (or to the needy) a pleasant task. Many times it comes at the cost of one’s comfort and maybe even their spiritual pleasures. Perhaps the guests are making it difficult somewhat to enjoy Yom Tov in the home or Shul. Perhaps the guests are not even cordial or enjoyable to host… Avraham Aveinu teaches us the true perspective and approach to this Mitzvah. He left the presence of The Shechina to tend to the needs of a few Arabs, whom he didn’t even know.

So many great Tzadikkim bemoaned the fact that because of their stature they were unable to perform this great Mitzvah. There’s a famous story about a Yid who arrived in the city of a certain great Rebbe, very late at night. All the homes were dark and the shutters were closed. Only one home had the light on. He knocked on the door and was greeted by a distinguished looking Yid who graciously invited him in. After giving the guest some cake and drink the man complained that he was still hungry. The host proceeded to cook up some porridge and serve him until he was satisfied. Then he offered him the bed to sleep.

In the morning when the rest of the household arose, the Rebbe asked them to be as quiet as possible so his guest can sleep in. After the guest awoke he was fed and directed to the Shul. There he found out, to his horror, that the gracious host who served him was none other than The Rebbe himself! What more, he slept in the Rebbe’s bed and the Rebbe stayed up all night because of him! He ran back to the Rebbe’s home to beg for forgiveness: “I had no idea that you were The Rebbe himself” He pleaded with The Rebbe to forgive him for the terrible disrespect.

The Rebbe replied that he would forgive him but on one condition. “Do you promise to keep any condition I give you in order to earn my forgiveness?”. The man of course answered in the affirmative. “The condition is that every time you come to this city, you must be my guest and stay in my home”!

Let’s conclude with reminding ourselves of the reason why the parents of The Bal Shem Tov merited such a great son. It wasn’t only the fact that they did the Mitzvah; it was the manner in which they did it! When Eliyahu Hanavie showed up ON SHABBOS DAY to their home, Reb Eliezer did not judge him. He made him as comfortable as possible, disregarding and ignoring the guest’s obnoxious behavior. I’m certain that for a Tzaddik like The Bal Shem Tov’s father, it was extremely uncomfortable to encounter a Yid who (seemingly) was Mechalel Shabbos, let alone treat him like royalty.

The above does not in any way absolve the guests from behaving in a gracious and cordial manner towards their host. Please draw your own lessons as to how far you wish to reach in this splendid Mitzva. The above was intended merely to provide a prospective for one to acquire a proper attitude towards this great Mitzva, NOT as an absolute directive.