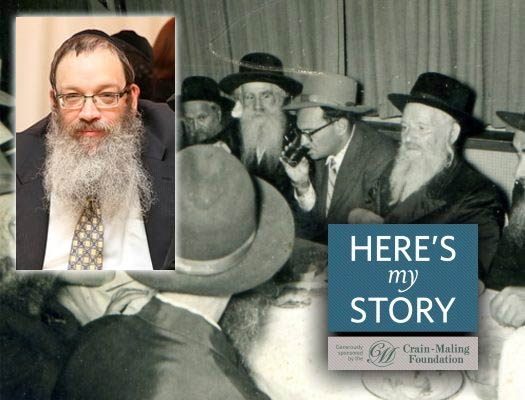 Rabbi Menachem Mendel Nemes works in the administration of Tzivos Hashem youth group at the Jewish Children’s Museum in Crown Heights, Brooklyn. He was interviewed by JEM’s My Encounter with Rebbe project in Brooklyn, in July of 2012.

I come from a Chabad family with roots in Russia and Germany, though by the time I was born in 1958, my parents were living in Crown Heights. When my mother was pregnant with me, she and my father came to see the Rebbe to ask for a blessing. At the time, it was the custom among some religious women to wear a partial wig covered with a kerchief. At the time the Rebbe had been campaigning that married women should cover their hair with a full sheitel (wig). When the Rebbe saw my mother he said to her, “A half a sheitel is a half a blessing, a whole sheitel is a whole blessing.”

After blessing them, the Rebbe asked to see my father privately and when my mother had left the room, he opened a drawer and took out a sum of money. It was a pretty large sum for those days. He then instructed my father to go to Manhattan and find out where the Broadway actors buy their wigs and buy my mother the nicest sheitel he could find. That is just one instance of the Rebbe’s sensitivity and caring that my family experienced.

My father was in the business of buying and selling postal stamps. As a result he travelled a lot, especially to Central and South America, buying stamps there and selling them to collectors in Europe. And, as if the Rebbe didn’t have enough on his mind, he instructed his secretariat to save the foreign stamps from his incoming mail for my father. I recall my father peeling off these stamps from the envelopes and arranging them in special collectors’ albums.

On one occasion in 1972, while my father was preparing to travel to a number of foreign cities – including Managua, Nicaragua – he wrote out his whole three-week itinerary for the Rebbe, asking for a blessing for a safe trip. The Rebbe gave the blessing, but also told my father not to rush. Meaning the Rebbe was blessing him to go, but not just yet.

So my father postponed his trip. And on December 23rd there was a massive earthquake in Managua. 6,000 people were killed and 20,000 injured. Some of the people that my father was to meet did not survive. The destruction and loss of life was terrible, but my father was spared.

Six months later my father decided to try again, and he asked the Rebbe if he should go now. This time the Rebbe instructed him, “Check and see what the US State Department advises.” My father called the State Department, and they said, “The situation following the earthquake is very bad. We don’t recommend that American citizens travel there.” So he waited.

Another three months passed, and again he asked the Rebbe, who told him that this time it was okay to go, provided he made sure to be inoculated against malaria and other tropical diseases.

When my father landed in Managua, he couldn’t believe the disaster before his eyes. About a quarter-of-a-million people were homeless; hardly anything was standing. When he asked the taxi to take him to the main post office, the driver laughed, “Are you crazy? That whole block is destroyed.”

My father insisted and, as it turned out, the main post office was still standing. My father went to see the postmaster general, who was amazed that he had come to Nicaragua. My father told him the whole story – how the Rebbe saved his life. In response, the postmaster general said, “You can have all the stamps you want for free.” As a result, my father made a very nice profit from those stamps.

With time, my father’s business changed. Instead of buying and selling stamps, he started printing stamps for small undeveloped countries that could not do this themselves. When his business changed, the Rebbe called him in, gave him $200 dollars and said, “I want to be a partner in your business.”

My father kept that $200 in the side pocket of his wallet and, wherever he travelled, he had it with him.

On another occasion, my father was traveling to Guyana, a very primitive place where in 1978 the murder-suicide of the Jones cult took place. Before he left, the Rebbe gave him a dollar and told him to find a Jew in Guyana and give it to him.

When my father arrived in the capital, Georgetown, he was told that there were no Jews living there. But as he had his instructions from the Rebbe, he could not just give up. “The Rebbe gave me a dollar for a Jew,” he said, “so I will find a Jew.” He started searching through the phone book and saw one Jewish-sounding name. So he went to that address and knocked on the door. A man answered and my father asked him if he was Jewish. The man said he was, and invited my father inside.

Once my father went in and saw the place filled with graven images, he realized he couldn’t stay there. So he asked the man to come to his hotel and spend Shabbat with him. The man did, and the experience proved life-transforming for him. Upon hearing from my father about the Lubavitcher Rebbe and that he had sent him a dollar for charity, he asked my father to please bring a picture of the Rebbe on his return trip.

My father did. And when he next visited the man’s house, all the graven images were gone and only the Rebbe’s picture was hanging up in the dining room. Following this my father kept in contact with him and upon his request, arranged that he should receive a kosher burial after his passing.

That’s what happened when the Rebbe made my father his messenger for delivering just one dollar – such a seemingly small and insignificant mitzvah, with such huge impact.