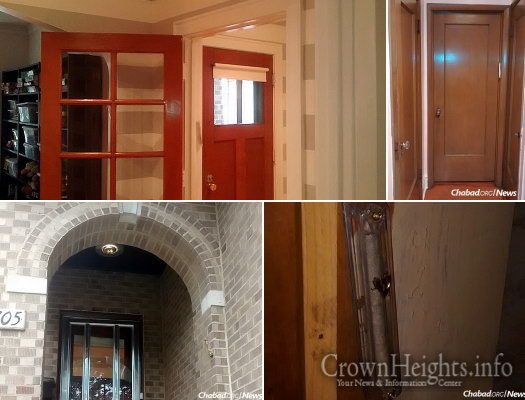 Chabad.org writer Menachem Posner tells of the fixation that Chicago architects had with doors back in the 1920s when his house was built, and why this benefits his Sofer every year before Rosh Hashana.

“Your house is a sofer’s dream,” he said, referring to his job as a Torahscribe. Then he handed me a shopping bag containing 25 mezuzahs.

Every year, during the month of Elul, which precedes Rosh Hashanah, it is customary to have a scribe inspect the parchment scrolls in our tefillin and the mezuzahs that grace the doors of our homes. The Torah tells us that the reward for mezuzah is long life for ourselves and our children, and the rabbis of the Talmud tell us that the mezuzah protects the denizens of the house.

Looking at it that way, who wouldn’t want to have their mezuzahs checked regularly?

When we first started out, it was simple. We lived in an apartment with few doors. Half-a-dozen mezuzahs, and we were good to go.

Since then our family has grown, thankG‑d, and we purchased a home. Before we moved in, I mentally calculated how many doors we had and ordered some more mezuzahs from a reputable scribe in New York.

But I underestimated the fixation that Chicago architects had with doors back in the Roaring Twenties. We have doors everywhere: a door to the attic, a door to the cold cellar (the space under the front steps), a door to the room where the gas and water pipes enter the basement (not to be confused with the boiler room, which also has a door, of course). One of the bedrooms has a single closet with three doors, and each of the bedrooms can be accessed from two doors. Do the math, and you see why our not large home needs an astronomical number of mezuzahs.

So I ordered some more.

Then I discovered more doors, and ordered some more.

By that time, a friend told me that he had a few mezuzahs to spare, and finally, we had just enough to cover the entire house.

Then came the joy of putting them up. Mezuzahs generally come in plastic cases, with a strip of double-sided tape on the back. But I’m not so keen on using the tape. First of all, it’s messy and hard to get off. Secondly, the “Code of Jewish Law” states that the mezuzah is to be “placed in a tube” and “attached firmly with nails.” True, the double-sided tape is strong and the commentators to say that glue would be just as good, but everyone is entitled to his personal meshugas.

Well, wooden doorposts are simple enough. But what is one to do with the brick archway thoughtfully provided by said 1920s’ architects or the plaster entrance to the living room?

Enter the drill. I’m not much of a fix-it guy, but this I could handle. One masonry bit, a pack of screws (yeah, I used them instead of nails) and a couple of anchors later, every door of our home was protected.

But then there is the custom to remove the mezuzahs for checking every year during Elul. For the most part, it was much easier to remove them than it was to put them up. But there were a few hiccups, like a broken screw on one of the three doors of the abovementioned mutant closet.

After a half-hour of work with my handy screwdriver, the mezuzahs were off the doors and ready to be dropped off with the sofer (scribe), who would work on them all day and return them to me by evening, so that our home would not be without mezuzahs overnight.

The call came as we were putting the kids to sleep: All the mezuzahs got a clean bill of health.

When I went to pick them up, I spent a few minutes bantering with the scribe in his basement workroom, surrounded by Torah scrolls, tefillin straps and other tools of his trade.

I picked up the mezuzahs and headed for home. Suddenly, my phone rang. It was the scribe; he had forgotten to give me one of the mezuzahs. Apparently, we have 26 doors, not 25. Who knew?

Once home, I began the job of putting all the mezuzahs back up. Satisfaction. Twenty-six freshly checked mezuzahs; we were ready to go.

Almost. Seems that I forgot one. That cold-cellar mezuzah still needs to be checked. Guess I’ll be back at the sofer’s with good old No. 27.

In the meantime, I hope my house doesn’t grow any more doors between now and Rosh Hashanah.