« The Chess Grandmaster and the Lubavitcher Rebbes
Video: Chasidic Wedding in Utah a Rare Event » 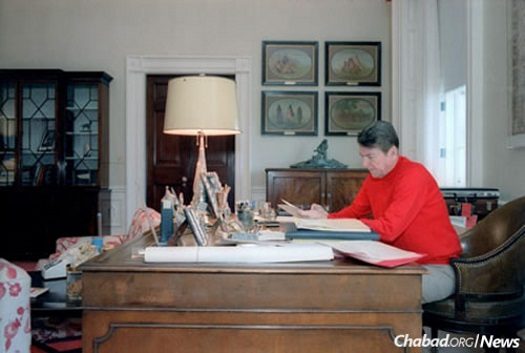 President Ronald Reagan working in his residence study on April 15, the day he wrote the letter to the Rebbe. Photo: The Reagan Library.

John Hinckley, 61, who shot President Ronald Reagan in 1981, was released Saturday from a psychiatric hospital in Washington, D.C. The assassination attempt took place on March 30, and the president was discharged from the hospital on April 11. Just four days later, on April 15, Reagan wrote a letter to the Lubavitcher Rebbe, congratulating him on his 79th birthday, which he (as had the president before him and all after him) had declared “Education and Sharing Day USA.”

President Reagan displayed a profound respect toward the Rebbe and his teachings. He was an early and enthusiastic adherent of the Rebbe’s call to make all people aware of the Seven Universal Laws, based on the belief in a Supreme Being. The Rebbe’s call for a moment of silence in the public schools, and his persistent belief that America must export to the world faith-based moral values, were among the themes that found a welcoming ear in President Reagan, who wrote:

“I am delighted to join with your many friends and followers in wishing you а veryHappy Seventy-Ninth Birthday.

“Your dedication and devotion to the spiritual and intellectual well-being of the Jewish people are an inspiration to all Americans.

“For more than two centuries, the Chabad-Lubavitch Movement has been а vital force in Jewish life and culture and а source of hope and sustenance during many difficult and tragic moments in Jewish history.”

On the following day, the Rebbe replied to the president. In his letter, the Rebbe noted that:

“ . . . your kind and thoughtful congratulatory message is doubly reassuring. While all of us are still under impact of the recent trying days for you and the Nation, in connection with the demented attempt on your life (Heaven forefend!), it is remarkable, and most gratifying, that the President has been able to give personal attention also to matters which, under the circumstances, might have justifiably been postponed, or overlooked.

“Your message, particularly in reference to the importance of emphasizing moral and ethical values in education, is as meaningful as it is timely. It is heartening to know that you, Mr. President, and your administration are committed to upgrading the education of all the citizens of this country.

“Please be assured that we in the Chabad-Lubavitch movement, along with all good citizens of this country, continue to pray for your rapid and complete recovery, and for your robust health consistently thereafter, so that you can carry out the awesome responsibilities of the President of this great and leading Nation in the world. In keeping with our basic belief that everything is by Divine Providence, how much more so being elected to the highest office in the land, we are convinced that G‑d has endowed you with the capabilities and strength to carry out your G‑d-given responsibilities in the fullest measure, with joy and gladness of heart.

“There is no better way in which I can reciprocate your good wishes than by reiterating the Divine promise to our Patriarch Abraham: ‘I will bless them that bless thee’ (Gen. 12:3). May you and the First Lady and all your family be blessed with all good from the Source of all blessings.”

Below are subtitled videos of the Rebbe’s talks following the assasination attempt, which include his penetrating analysis of what brought Hinckley to his debased actions and what courses could be taken to remedy the malaise that had affected the nation.

The Rebbe began by wishing the president a complete and speedy recovery, and expressed his appreciation for the president’s letter, which he saw as an expression of his good will toward the entire Chabad movement and the Jewish community in general. He also explained how the government’s mandate was given by G‑d himself, as expressed in the motto on the country’s currency—“In God We Trust”—which is emblematic of the faith-based underpinnings of the United States. The Rebbe went on to explain the symbiotic relationship of social action and religious devotion.

Turning his attention to the assassination attempt, which had been blamed on the poverty that struck the nation, the Rebbe said that poverty was no excuse for violence and crime. On the contrary, it could be a powerful motivation for achievement. In fact, Hinckley himself was raised in comfortable circumstances. Rather, the Rebbe argued, it came from a lack of guidance and firm moral education both from home and school. Instead of teaching children that criminal acts should be avoided since this invites punishment at the hand of government, the Rebbe urged that children be taught that there is “an Eye that sees and an Ear that hears” all one’s actions. If the awareness of G‑d would be properly instilled in students, it would prove to be the most powerful deterrent from crime.

Turning his attention to the rehabilitation of the perpetrator, the Rebbe pointed out that the common response is to lock him up. Instead, the Rebbe made the case for education permeated with belief in a Supreme Being as the most powerful preventative measure, which would have avoided the unfortunate incident, and precluded the need for hospitalization, treatment and rehabilitation.

Click on the links below to watch the videos at Jewish.tv:

Clarity of Purpose Part 2: Freedom for What?

« The Chess Grandmaster and the Lubavitcher Rebbes
Video: Chasidic Wedding in Utah a Rare Event »