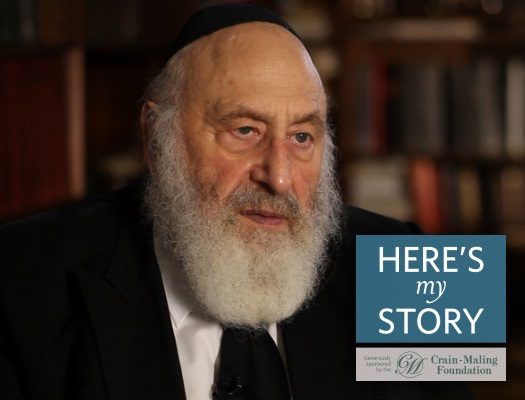 Rabbi Dovid Shochet has served the Jewish community of Toronto since 1957 and is presently the president of the Toronto Rabbinical Council. He was interviewed by JEM’s My Encounter with the Rebbe project in his home in June of 2012.

I was born and raised in Basel, Switzerland, but in 1947, when I was fifteen, my family moved to the Netherlands, where my father became the Chief Rabbi of the Hague, and opened a yeshivahfor Hungarian refugees from the war. Five years later, I came to New York to enroll in the central Lubavitch yeshivah in Crown Heights.

I chose a Lubavitch yeshivah at the urging of my uncle, Rabbi Chaim Mordechai Aizik Hodakov, who was then secretary to the Lubavitcher Rebbe. But what really decided me was the pride in being Jewish that the Lubavitch chasidim exhibited. In Europe, many observant Jews tried to blend in – for which you couldn’t blame them, considering the degree of anti-Semitism that existed. They would cover their heads, although not with a yarmulke which would make them stand out; they’d wear a cap or a hat that looked like every other person’s headgear. But Lubavitcher chasidim openly wore yarmulkes and even went on the streets with the strings of their tzitzit hanging out. That impressed me very much.

In 1952, when I enrolled in the Lubavitcher yeshivah, I had my first audience with the Rebbe. What I distinctly remember from that first audience is the lesson he imparted to me about appreciating life. “Don’t take life for granted,” he said. “In the morning, when you wake up, thank G-d for everything that has been given to you.”

He went on to say that many people go to sleep at night and, when they wake up in the morning, they expect their shoes to be by their bed where they left them the night before. As they are getting dressed, they complain that the weather is too cold or too hot. In effect, they are criticizing G-d – because who makes the weather? Instead, they should be grateful that they are still alive, that their possessions are still with them, that a new day is beginning where they have an opportunity to do many good deeds. It was a lesson I never forgot.

In that first audience, the Rebbe also advised me to go into Jewish education. I had been planning to enroll in university after finishing my yeshivah studies, with the intent of becoming an electrical engineer, but the Rebbe said that I would find working in Jewish outreach much more rewarding because, as he put it, “every Jew is a diamond.”

I followed his advice and, in 1957, I was appointed the Rebbe’s emissary to Toronto, where I have been ever since. After I was already well established there, I was invited by Rabbi Mottel Zajac, the Rebbe’s emissary to Buffalo, to give a talk to local university students. It turned out though that the audience would be mostly non-Jewish and that representatives of other religions would be speaking as well, so my first inclination was to refuse; I did not want to take the time away from my other duties in Jewish outreach. However, I did call the Rebbe’s office to ask what I should do.

The answer that I received was that it is worthwhile to influence non-Jews positively, especially regarding the mitzvah of giving charity. I was also advised to recount a story attributed by some to the famous 17th century Polish rabbi, Yom Tov Lipmann (from whom I am descended, though I didn’t know it at the time).

So I did this. I attended the gathering and told the story which happened in Krakow in the days of Rabbi Yom Tov, who is also known as Tosfos Yom Tov after the title of his most famous book.

This story concerned the town scrooge called Yossele the Miser. He was a Jew, but because he flatly refused to give charity, the Jews in Krakow hated him. So much so that, when he passed away, they buried him on the very edge of the cemetery in a place set aside for unworthy people. They felt he didn’t deserve any better.

But, a couple of weeks after his funeral, a tumult was unleashed in the town. Poor people who had depended on handouts from the butcher and the baker were suddenly being turned away. As well, the funds for free loans, for help with wedding costs, for medical emergencies, had somehow mysteriously dried up.

Distraught, the people of the community came knocking on Rabbi Yom Tov’s door demanding an explanation. When he investigated, he learned that the benefactor behind all the charity in the town had been none other than Yossele. He had reimbursed the butcher and the baker for their handouts; he had kept the free-loan fund afloat. He just didn’t want anybody to know.

Rabbi Yom Tov was so moved by this man’s selfless actions and humility that he announced that, when he himself passed away, he should be buried on the edge of the cemetery next to Yossele.

When I finished telling this story, which was well received, a young priest came over to me and asked me to repeat it. At first I declined, saying jokingly, “I did my best; my English won’t be any better next time.” But he was so insistent that I agreed and invited him to my hotel room where I related the story for a second time.

I noticed that when I was speaking, he seemed very agitated. He kept pacing the floor, and when I finished, he asked me to tell the story for a third time. Thinking that he must be mentally unhinged, I demanded to know why he had this obsession with this story.

He said, “I think that Yossele was my great-grandfather.”

He explained that his mother was a Polish refugee from the war, and when she married his father, who was an officer in the army, she had to agree to keep her true identity a secret. But, before she died, she confessed it all to her son. She revealed her background of Jewish ancestry, and she told him a very similar story about one of his forbearers.

“That means you are a Jew,” I said. “And if you are Jew, you are obligated to follow the Torah and keep its commandments.”

He said nothing and left, and I thought that I would never hear from him again. But I did.

Years later, when I was visiting Jerusalem, a bearded man approached me near the Western Wall. “Rabbi Schochet, Shalom Aleichem,” he said.

“You know my old self. I’m the guy that spoke with you in Buffalo … After our conversation, I did a lot of thinking, and I decided to return to my roots. And here I am now a Bresloverchasid.”

When I heard that, I realized why the Rebbe told me to give that speech and tell that story. It was no coincidence. I needed to speak before that non-Jewish audience in Buffalo, because there was one Jew there that had to be saved.

So to all Chabad emissaries I say – don’t complain that the Rebbe sent you out into the world where life is difficult. Don’t think, “I should not be here,” or “I don’t want to this or that.” Remember what it is all about – if you save one person, you save the world.