« Laws and Customs: 17 Tammuz and the 3 Weeks
Shabbos at the Besht: Can Jews Be Domesticated? » 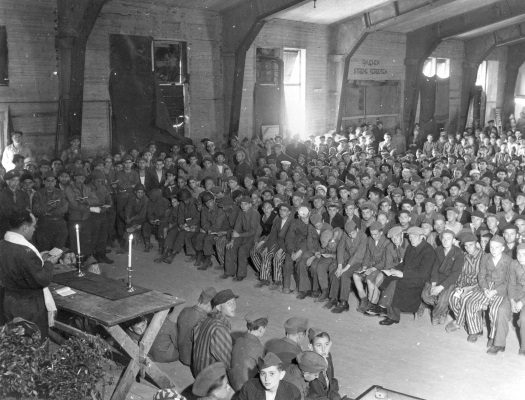 Rabbi Herschel Schacter leading a prayer service for survivors in the liberated Buchenwald camp in Germany in 1945.

I heard the following at a farbrengen on Gimmel Tammuz, from Rabbi Telsner of Australia:

Rabbi Herschel Shechter was the first American Jewish chaplain who entered the notorious Buchenwald concentration camp. When he returned to the United States he gave the Frierdiker Rebbe a detailed report of what the situation is for the survivors in particular and for the Jews of Europe in a larger scope.

After that he would often discuss various issues with the Rebbe.

One time, the Rebbe asked him, “Reb Herschel, would you have wanted to live in the times of Reb Yochanon ben Zakai?”

Surprised at this hypothetical question, Reb Herschel replied, “Of course it would have been interesting to live in that time.”

The Rebbe then asked, “And how about to live in the time of the Rambam?”

Reb Herschel replied, “I would avail myself to the opportunity to ask him to resolve a few questions that I have toiled with for a lengthy time.”

“And would you have desired to be able to see the Baal Shem Tov?, inquired the Rebbe.

Hearing this the Rebbe said, “And I say, No.”

Seeing the surprised expression, the Rebbe explained, “Being that Hashem placed me in this generation that means that this is my time to fulfill His will, so why should I desire to live in another Time?”

Hearing this I thought about the Rebbe’s statement in the first farbrengen. It was not our decision that we were born in the time of the seventh generation. But this is the will of Hashem and therefore we should recognize that if we have the challenge, we also have the ability to succeed.

The same thing is now, very often we bemoan the fact that now there is a greater concealment than ever before, etc.

However, being that we are living in this time, that means that this is the time that Hashem chose us to accomplish. If we were giving this extra challenge, that means that at the same time, Hashem gave us the strength to not only persevere under this cloud, but to prevail and succeed.

May we all succeed in bringing out that geon Yaakov and overcome all our challenges.

« Laws and Customs: 17 Tammuz and the 3 Weeks
Shabbos at the Besht: Can Jews Be Domesticated? »