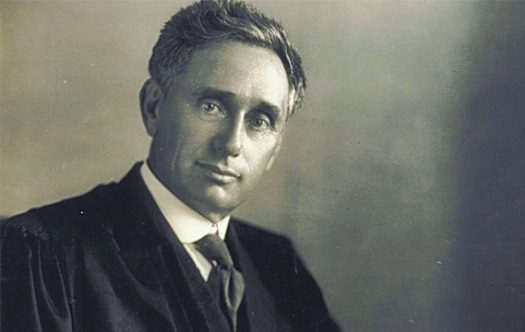 Weekly Story: How Justice Brandeis Helped Save the Rebbe Rayatz

The following is based on what I heard from Rav Dovid Edelman, a”h, The Rebbe and Frierdiker Rebbe’s Shliach to Springfield Mass., for close to seventy years.

Our sages inform us that Hashem prepares the salvation before the problem arises. And this was so evident with the story of the Frierdiker Rebbe’s salvation, on yud-beis Tammuz.

In 5670 (1910) the Rebbe Rashab called in five chassidim. One of them was Reb Zalman Havlin and the Rebbe Rashab instructed him to move and settle in Eretz Yisroel, explaining that there is a tremendous need to build a Jewish infrastructure, since in the near future,  Jews will be coming to Eretz Yisroel in droves. At that time even the Zionists weren’t going there in great numbers and the words of the Rebbe were not understood by the people. But little did people know what was going to happen a few decades later.

He then turned to a few of the other chassidim (I forgot the names that Rav Dovid mentioned) and instructed them to move to the main cities of Russia, such as the cities of  Petersburg and Moscow and establish a Jewish community. Not just a shul, but everything that would be needed for thousands of Jews. Shochtim, mikvoas and chadorim. Once again the people were bewildered at this, as at that time unless you had a special permit, no Jew was allowed to live in the cities, to the contrary, they were forced to remain segregated and live in the area designated for Jews.

The Chassidim obeyed and little did they realize that in seven years, at the onset of WWI these restrictions were overturned and the Jews were obligated to vacate from their places and settle in the cities. But because of the foresight, or let us call it properly, the prophecy of the Rebbe Rashab, there was an infrastructure with Rabbonim, shoctim, mohelim , yeshivos and mikvoas to take care of them.

Then turning to Reb DovBer Meir Rabinowitz, known to the chassidim as the RaDaM, the Rebbe Rashab instructed him to move to America. Once again a very surprising instruction, as the general feeling among Rabbonim then was that one should not move to America. Their fear was that in America, there is no infrastructure of Yeshivos etc., and the children would not grow up to be Shomer Torah U’mitzvos. As this sad reality was borne out from the numerous great Rabbonim that settled in America, yet only a handful of their families remained frum.

But the Rebbe saw things that most people didn’t see. The Rebbe saw that the RaDaM’s sons are going to play a pivotal role in saving his – the Rebbe’s only son, years later.

The RaDaM was one of the first chassidishe Rabbonim in America and he settled in Boston. Seeing that the shochtim didn’t have beards was upsetting to him, so he brought in fifteen chassidishe Shochtim.

On tes vov (the 15th of) Sivan, when the police entered the Frierdiker Rebbe’s apartment, they asked him for his name. He replied, why are you asking after you barge in? If you don’t know my name maybe you came to the wrong apartment!

After answering that he is a teacher of Judaism, they asked him, how old are you? He replied a hundred forty —. Looking at him they said , everyone knows that you are in the forties why did you add a hundred years?

The Frierdiker Rebbe replied, it is a continuous chain from the Alter Rebbe on and that is how old and strong the movement is!

A few moments after they took the Frierdiker Rebbe with them and placed him in the wagon going to the prison, a member of the family went to a telegram station and sent a telegram to the RaDaM in Boston, just two words “Tatte Arestirt” (father was arrested).

When the RaDam received this telegram he was shaken to the core. He recognized the seriousness of this situation, not only as a chossid, but he was personally extremely close to the Frierdiker Rebbe, before he became Rebbe. So he immediately called up his son Pinchos who was a lawyer in Springfield and instructed him to stop whatever he was doing and go to Washington together with his brother Oscar.

At that time, Oscar was employed by the Internal Revenue Service (IRS) and was extremely active in politics. He was extremely well connected with numerous officials.

Oscar boarded the train in Boston and was joined by his brother in Springfield and they went to Washington. After dropping off their belongings in a hotel, they went to the Supreme Court building.

Entering the building Oscar was immediately recognized by the receptionist who said, “Oscar it is so nice to see you, what brings you here this time?”

The receptionist said, Oscar, you know the Supreme Court is finishing its cases for the year and all the Justices are extremely occupied, give me your number and we will call you in a few weeks, for sure in a month, or come back then and I will let you in.

Oscar replied, that is impossible because it is a matter of saving an important person’s life.

However, the receptionist replied, I am not allowed to allow anyone disturb the Justices when the court is in session.

Oscar didn’t know how he should answer that, but at that moment Justice Brandeis walked out of a room at the end of the long corridor and saw him. Seeing him his face lit up and said, Oscar my friend, come over here.

The receptionist was shocked, but wouldn’t disobey the Justices’ wish and allowed the two brothers to pass.

When he came closer Justice Brandeis took one glance at him and said with concern, “Oscar you look pale is everything alright?”

Oscar replied in a trembling voice, The Lubavitcher Rebbe was arrested.

Hearing this Justice Brandeis exclaimed in shock, “The Prince of Israel”. He then instructed them to follow him into his chamber.

As soon as he entered he picked up his phone and instructed his assistant Mr. __ Cohen, to come in on an urgent matter. Mr. Cohen came and Justice Brandeis said, drop all the work you are doing for me on the cases of the court. It is a matter of life and death. I want you to go immediately to the Senate and meet the powerful Senators, Wang, Morris and __, and tell them that Communist Russia arrested the Lubavitcher Rebbe on false charges. You should stress to them that there are in this wonderful country of ours, three hundred synagogues that revere the Lubavitcher Rebbe as their spiritual leader. In other words there are over fifty thousand tax paying voters that are requesting and demanding that we save him.

Now it is extremely rare that any Justice to come to the Legislators and request something of them. As soon as Mr. Cohen entered the Senate, the Senators knowing that he is the closest clerk to Justice Brandeis, recognized that he must be coming on an urgent matter. Hearing the message that was sent, they all went with Mr. Cohen and the Rabinowitz’s directly to the State Department and pleaded for their intervention.

Seeing these three powerful Senators together with the right hand man of Justice Brandeis, the State Department immediately sent a telegram to the Russian authorities demanding that they release the Rebbe. They also sent telegrams to their ambassadors in every country, that the Ambassador should prevail upon the government of their host country that they too should demand that the Rebbe be freed. So the intense pressure from all these countries was something Russia wasn’t interested in standing up against it, and they freed the Rebbe a few weeks later, on yud-beis Tammuz..

One may ask what was the sense of urgency? The answer is simple. On that night Russia arrested eleven religious leaders. The Frierdiker Rebbe was the only Jewish leader, the others were connected to other religions. The other ten were executed that day (or the following one), yet the Rebbe was spared.

May we all also be immediately redeemed from this imprisonment with the coming of Moshiach Tzidkeinu.

Someone asked Reb Dovid, weren’t they involved in saving the Frierdike Rebbe from the Nazis? (As if to imply, you might be mixing up the two occurrences).

Rabbi Edelman replied, And why do you think that they turned to the Rabinowitz’s then? Isn’t it because they were successful in saving the Rebbe, the first time.

Compiler’s note: Justice Brandeis served on the Supreme Court from 1916 through 1939, when he retired, so his involvement as a powerful Justice could only have been in this situation. The Frierdiker Rebbe was saved from the Germans in 1940, a year after his retirement.

Rabbi Avtzon is available to farbreng in your community and can be contacted at avtzonbooks@gmail.com.