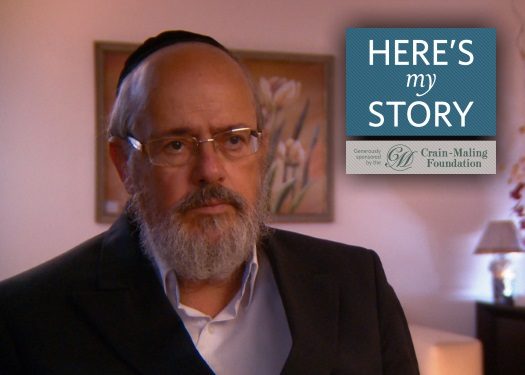 Rabbi Gershon Lieder presently serves as the Director of Mayanei HaYeshua Hospital in Bnei Brak, Israel. He was interviewed by JEM’s My Encounter with the Rebbe project in his office in August of 2012.

In 1975, Rabbi Yekusiel Yehudah Halberstam, the Sanz-Klausenburger Rebbe, opened a not-for-profit hospital in Netanya, Israel. In response to the astonishment of many that a Chassidic Rebbe would establish a hospital, he explained:

“While incarcerated in a Nazi death camps, I was shot in the arm. I was afraid to go to the Nazi infirmary, though there were doctors there. I knew that if I went in, I’d never come out alive … so I plucked a leaf from a tree and stuck it to my wound to stanch the bleeding. Then I cut a branch and tied it around the wound to hold it in place. With G-d’s help, it healed in three days. I promised myself then that, if I got out of there, I would build a hospital in Israel where every human being would be cared for with dignity. And the basis of that hospital would be that the doctors and nurses would believe that there is a G-d in this world and that, when they treat a patient, they are fulfilling the greatest mitzvah of the Torah.”

The Sanzer Rebbe asked me to oversee the project while it was still in the early stages of development and the eventual director of the hospital. He wanted me to carry out his plan of creating a hospital which offered the highest level of care, while at the same time adhering to the highest level of Torah observance. Although this was a noble goal, we were struggling to raise the necessary funds. The Israeli Health Ministry, run by a secular party, was not very keen on supporting the project and most people were skeptical that we would actually succeed. Our main donors were Sanz chasidim who felt obligated to donate because it was their Rebbe’s undertaking. So we decided to establish a fund-raising committee and expand our reach to North and South America.

As part of this effort, the committee decided to visit the Lubavitcher Rebbe in Brooklyn and ask for his assistance and advice. Five members of the committee were chosen to go and I, as the director of the hospital, flew in from Israel to participate in the meeting.

We started off by introducing ourselves to the Rebbe and, being the youngest, my turn came last. I said, “I am the director of this hospital but I have no certification or experience whatsoever. My only experience till now has been assisting the Sanzer Rebbe. In fact, an Israeli newspaper headlined their story about the hospital with, ‘The Assistant who Became a Director.’”

The Rebbe reassured me, “I can only tell you one thing. The Sanzer Rebbe knows what he is doing and if he thinks that you are qualified for the job, then you do not need anyone else’s blessing.”

I felt very relieved; if I had the support of these two great rabbis then I was sure to succeed.

We began discussing the technicalities of the project in great depth. The Rebbe asked us many questions that we never dreamed he would ask and I had a hard time answering. Only one member of the committee, Rabbi Shlomo Greenwald, who had previous experience working in hospitals was capable of giving the answers. We were greatly surprised by the knowledge which the Rebbe displayed and by his pragmatic approach.

The Rebbe told us, “Don’t feel inferior and don’t pay attention to what other people are saying about you. You are emissaries of a great rabbi and even though you will face obstacles, you will succeed.” He then proposed several ideas to us, among them that we install a CAT scanner, which would provide much sharper images than a standard X-ray machine. At the time, there were only three such scanners in Israel, and we were afraid to ask for one. We thought they would just laugh at us: “The smallest hospital in Israel thinks that it’s going to get a CAT scanner?”

We didn’t follow the Rebbe’s advice, and it took us many years to get a scanner with many hitches along the way. Fifteen years later, I visited the Lubavitcher Rebbe again while he was distributing dollars for charity, and I told him about some of those hitches, reporting that we had not yet installed a scanner. He replied, “What a shame, what a shame.” Apparently he felt that if we had pursued this matter right away, we would have had less problems and been successful.

At the meeting, we also asked the Rebbe to write us a letter of recommendation which we would be able to use to persuade Lubavitcher chasidim to donate to our cause. The Rebbe answered that he customarily does not write letters of recommendation, but he offered to write us a personal check which we could then photocopy and attach to our prospectus. “If they see that I donated,” he told us, “I’m sure that they will give as well.” It was a very wise solution and, indeed, it helped us immensely.

There was one final issue. In addition to the hospital, the Sanzer Rebbe had founded a nursing school for religious girls. Many religious community leaders in Israel opposed the idea. They felt that this would lead to immodesty, and it would cause religious girls to enroll in universities. We had consulted several rabbis who approved of the school but they’d asked us not to publicize their names, as this might antagonize the opposition.

But the Lubavitcher Rebbe, before even hearing that others had given their approval, exclaimed, “You must do this! When secular Jews see that the religious community is contributing to the field of medicine, G-d’s name will be sanctified and many will be brought closer to Judaism.” He said that we could openly publicize his support for the school.

At the conclusion of the meeting, he encouraged us to carry out the Sanzer Rebbe’s instructions and not pay any heed to those who predicted our failure. “The Sanzer Rebbe and I understand each other,” he added.

Today, Laniado Hospital, also known as the Sanz Medical Center, is a great success. We are the only hospital in Israel that has never ceased operational facilities due to a strike. Our largest department is the maternity ward, which delivers more than six thousand babies annually. To date, our nursing school has graduated more than one thousand nurses who have found jobs in hospitals throughout Israel, and who are spreading the Torah approach to medicine wherever they go.