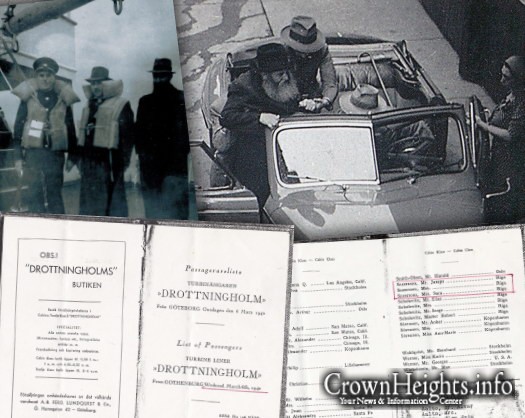 This Shabbos, the 9th of Adar II, marks the day the previous Lubavitcher Rebbe, Rabbi Yosef Yitzchok Schneersohn, also known as the Frierdiker Rebbe or the Rayatz, arrived on the shores of the United States after escaping from war-torn Europe in 1940.

In honor of this auspicious occasion, Rabbi Sholom and Frida Shapiro, son-in-law and daughter, respectively, of Rabbi Nissan Mindel, a personal secretary of the Frierdiker Rebbe and later the Rebbe, have agreed to share with the wider Lubavitch community several rare documents and photos relating to the Frierdiker Rebbe’s arrival in America.

The documents and photos are all excerpts from a soon-to-be-published book, Chabad in America Through the Folders of Nissan Mindel, by Nissan Mindel Publications.

We present first a photo taken on the ship the previous Rebbe traveled on from Europe to the United States, the Drottningholm, which departed from Gothenburg, Sweden, in early March, 1940, and arrived in the U.S. a couple of weeks later.

In the photo is a young R’ Nissan Mindel, who accompanied the Frierdiker Rebbe on the journey, but – unlike the Rebbe’s family – did not occupy first class quarters. He is seen with two other men on the boat’s deck – one who seems to be an officer of the ship and the second an unidentified Jewish man – and wears a life-jacket for safety. Next, we present the cover and two pages from the list of passengers of the Drottningholm.

Circled on one page are the names of the Frierdiker Rebbe, his wife and his mother, as well as his secretary Rabbi Chaim Lieberman, and on another page the names of his son-in-law, Rabbi Shmaryahu Gurary, and the latter’s wife and son.

Note that all the names are in their Latvian form, as the Frierdiker Rebbe and his family were naturalized Latvian citizens at the time, and were traveling with Latvian passports.

Not listed are the names of Rabbi Nissan Mindel and Rabbi and Mrs. C.M.I. Chodakov, who were on the ship, but did not travel in first class with the rest of the previous Rebbe’s family. Lastly, we present an excerpt from the original copy of a heartwarming article written by someone who witnessed the Frierdiker Rebbe’s arrival in New York, and his funeral ten years later. The first three and last pages of the article are presented here, and the full manuscript will be published in Chabad in America Through the Folders of Nissan Mindel, by Nissan Mindel Publications.

The name of the article is ‘The Wonder Rabbi,’ and the original manuscript contains handwritten edits by his son-in-law and successor, the Lubavitcher Rebbe (as well as some edits by R’ Nissan Mindel). The author of the article is unknown.