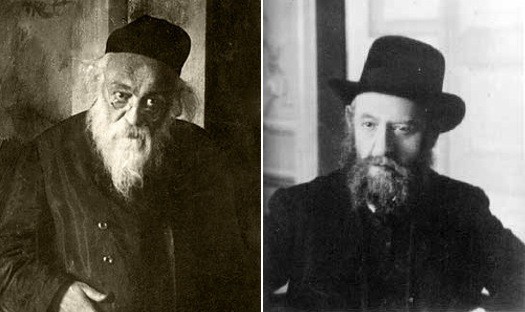 The following two stories were related this past week at a bar mitzvah. I could not ascertain if the second story is an explanation and reason to the first story, or just that some of the people involved are related.

Reb Moshe Rubin a”h was a noted chossid of whom the Rebbe praised his yiras shomayim. his family was Slonimer chassidim, and he was learning in the Nevardik Yeshiva, when the Rov of his town Rabbi Fink, himself a Litvishe, whose family stemmed from chassidim, encouraged Reb Moshe’s parents to send their son Moshe to study in Tomchei Tmimim in Otwock Poland.

Rabbi Fink’s grandson is a Rov in Pennsylvania and he related the following.

In Czarist Russia there was tremendous cooperation between the chassidim and misnagdim. Each side respected the other and they realized that the only way to stand strong against the Czar was to stand strong together.

So they asked him, Rebbe you are the sar (Prince) of the Torah, why do you follow the Rebbe of Lubavitch, aren’t you daas haTorah?!

Reb Chaim replied there were two times when Hashem’s shechina came down and was revealed on this earth. Once was by Matan Torah and the other time was when the Beis Hamikdash was built.

Both of them incidentally were on a mountain. however, we find a distinction between the two mountains. The day after the Torah was given on the mountain, everyone and even animals were allowed to go on the mountain. In other words, the holiness of the moment didn’t last.

However, the other mountain the holiness did last. Even today, two thousand years after the destruction of the beis hamikdash, may it be speedily rebuilt, we still are not allowed to go there. What is unique about that mountain? it is because something else happened there a thousand years before the building of the beis hamikdash occurred, and that was akeidas Yitzchok. When Avrohom avinu had mesiras nefesh, and was willing to shecht his son Yitzchok on the alter.

Turning to his students, Reb Chaim concluded, I am whoever I am, but if you want to know who the prince of mesiras nefesh is, that is the Lubavitcher Rebbe, and when one has mesiras nefesh, the holiness and sanctity of the Jewish nation remains.

I chose this story as last week was parshas v’atah titzaveh. Most of us learned part of the maamar V’atah titzavaah, the last maamar that we were zoche le’eis atah to receive from the Rebbe. In that maamar, the Rebbe explains why on Purim the Jewish people reached a higher level than they did at Matan Torah, and the reason is because then they had actual mesiras nefesh.

So let us learn from the Rebbe and all the Rebbeim to stand firm and not be influenced by the tumultuous surroundings, stand with the pride of a Jew and heed every detail of Hashem’s Torah.

Then we shall be zoche to be redeemed from the golus, just as bnei yisroel were redeemed then from their predicament.