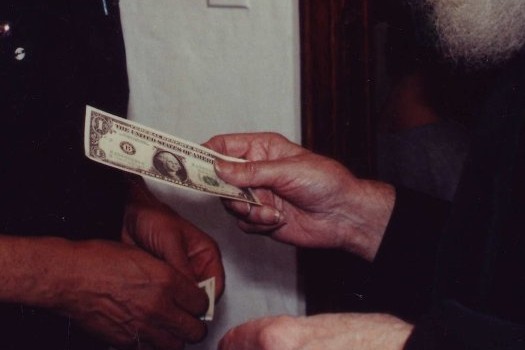 Yeshiva World News today published the following story of the Lubavitcher Rebbe, which was excerpted with permission from Torah Tavlin vol. 3, a collection of stories and sayings, wit and wisdom from Torah leaders by Rabbi Dovid Hoffman:

Aside from the horrendous loss of life World War II dealt us, another disastrous effect of the Holocaust was, for many survivors, loss of faith. After all they had experienced they tragically threw off any remnant of their Jewish past and their lineage.

One such man survived the Holocaust in body, but not in spirit. He was “angry” with Hashem and vowed to shake off anything to do with religion. After some time in a DP camp, he boarded a ship that brought him to New York, and he resettled in the Crown Heights section of Brooklyn. He soon married a similarly disenchanted woman. They had a son who was the apple of their eye, but they were careful to raise him without any Yiddishkeit; no bris milah, no Shabbos, no Torah!

The child grew up with only the slightest awareness of his religion. As it happened, he married a Jewish woman, but there was nothing even remotely religious about their lifestyle. Just as his father had done, he carefully and intentionally instilled a dislike for religion in his children and never celebrated Jewish holidays. This worked for all of his children—except one. To the man’s displeasure and chagrin, one of his sons became a ba’al teshuvah!

Although they lived in very different worlds, the religious son remained close to his anti-religious father. And so, when the young man called to inform him of the happy news that he was engaged to be married and he wanted his father to attend his chasunah, he was shocked by his father’s hostile reaction. “I have no interest in your religious ceremony! In fact, it pains me. My son, I love you and would do anything you ask of me, but I cannot attend a religious wedding. It simply conflicts with everything I stand for!”

The son took a few moments to digest this information. Then he seized the moment. “Okay, Dad, so don’t come if it bothers you so much. But when you say you will do anything else I ask of you…do you really mean it?”

“Yes, anything. If I can physically do it, I will do it for you. I give you my word.”

The son didn’t hesitate. “Okay, Dad. If that’s the case, then the one thing I ask of you is that you have a circumcision!”

A circumcision! The father was shocked. A bris milah was something he always avoided, for it was the quintessential sign of Judaism, the one thing he disliked most. On the other hand, he had given his word to his son to physically perform anything he asked. At first he said no, but after quite a bit of arguing, eventually he agreed and underwent the procedure.

It seemed that the bris had an immediate effect on his psyche, for a few days later, while still recuperating from the difficult surgery, he began to reconsider his decision not to attend his son’s religious wedding. He would come for a short while, he told himself, definitely not long enough to be influenced by those religious fanatics.

At the wedding, the father was so impressed by the enthusiasm of his son’s friends that he found himself dancing enthusiastically and just couldn’t pull himself away! At one point, the caterer approached the father and said, “Sir, I am so inspired by your joyous countenance that I wish to present you with a gift, something which is very precious. It is a dollar bill blessed by the Lubavitcher Rebbe, R’ Menachem Mendel Schneerson zt”l.”

The father looked at the man and then at the bill. Suddenly, he turned pale and collapsed in a faint. When he regained consciousness, the first words he uttered were, “That’s my dollar bill!” Then he fainted again.

When he was finally fully revived, he explained his dramatic reaction.

“As a teenager growing up in Crown Heights, I once went with a few of my public school buddies on a Sunday morning to an old man who just gave out dollar bills for no reason. We stood on line giddily watching as the bearded man handed out dollar after dollar. When my turn arrived, he handed me a bill which I greedily took and moved on. But, suddenly, he called me back and asked me if I had a circumcision. I told him no, and upon hearing my answer, he proceeded to take back my dollar. Cryptically, he proclaimed, ‘When you have your bris, I will give you back your dollar.’”

The father shook his head in wonder. “Well, I just had my bris last week, and now, all these years later, I see that the rabbi sure kept his word!”